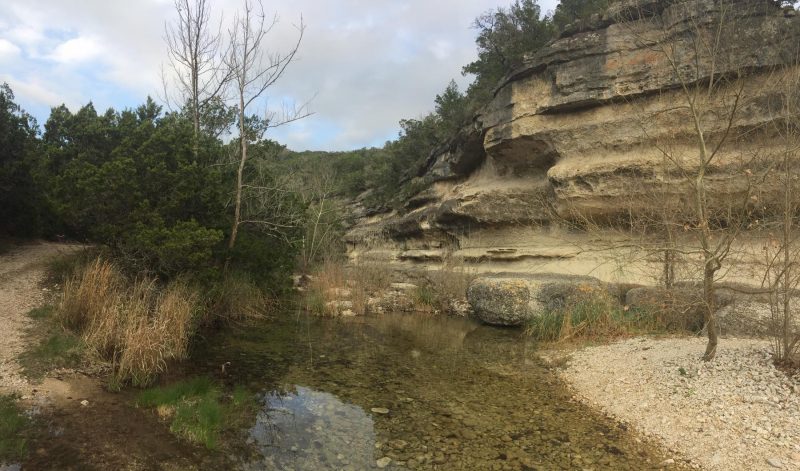 From March 6-8, field assistant Beth Bannister and I explored Lost Maples State Natural Area, in the Hill Country near Vanderpool, Texas. I’ve recorded at Lost Maples a number of times and was excited to visit, but was concerned that there would be little to record so early in the spring. Boy, was I wrong on that count!

We arrived at Lost Maples shortly after dark. Fortunately, it had rained the day before. The temperature was 68F, and probably had exceeded 75F during the heat of the day. Why was this important? Well … because under those conditions in the spring, a very special thing happens at Lost Maples … Barking Frogs begin calling from the limestone bluffs above the Sabinal River and it’s tributary Cane Creek, both of which run through the middle of the refuge.

The Barking Frog, Craugastor augusti, breeds on land in moist areas under boulders or in crevices among outcrops. It is found in Mexico and in the United States from the Texas Hill Country to New Mexico and limited portions of Arizona. Its call sounds like a muffled bark and can easily be confused with the bark of a dog. Beth, in fact, thought she was hearing a dog when we first got out of the car in the main parking area. Imagine her surprise to learn the soundmaker was actually a frog!

Checking out a number of different locations, we finally homed-in on a nice-sounding chorus along the Sabinal River:

A night chorus of Barking Frogs (Craugastor augusti) calling from limestone bluffs next to the Sabinal River at Lost Maples State Natural Area in the Hill Country of Texas. 11:10pm, 6 March 2017.© Lang Elliott.

Returning to the main parking lot, we were surprised to discover an immature Great-Horned Owl, perched in a Cottonwood tree near the edge of the river. I wasn’t able to get a good recording because the river was too loud, but when I tried again two nights later, the owl was calling from a different tree, a bit farther from the river, and allowed me to place my soundscape mic directly beneath him for a splendid recording:

Closeup soundscape portrait of an immature Great Horned Owl sounding off at night next to the Sabinal River at Lost Maples State Nature Area in the Hill Country of Texas. 2am, 8 March 2017. © Lang Elliott.

The gruff, throaty calls of the youngster keep the parents informed of its whereabouts. The young owl is actually full-sized at this point, though still unable to feed on its own. Listen carefully and you’ll hear the youngster fly to a different perch near the end of the recording, followed by distant calls.

During our visit, I tried several times to capture a nice dawn chorus, but most didn’t work out for various reasons … such as Carolina Wrens or Cardinals coming-in too close. But I hiked upstream a ways and got a very relaxing mid-morning chorus featuring the gurgling of the Sabinal and the downward cascading whistled songs of a Canyon Wren, calling from high on a bluff. Note also the chattering songs of a Bewick’s Wren, and the resonant cooing of a White-tipped Dove … a species that only recently has crept northward into the Hill Country (note that this is the same recording featured at the top of this post):

Just a few minutes later, I was able to home-in on another White-tipped Dove, which allowed me to record it’s cooing from about twenty feet away. As soon as I started recording, a hoverfly appeared and buzzed for nearly the entire duration of the recording:

A fun recording featuring the cooing of a White-tipped Dove and the buzz of a hoverfly. A Northern Cardinal sings loudly at first and a Carolina Wren joins in at the end. 9:45am, 7 March 2017. Lost Maples State Natural Area in the Hill Country of Texas. © Lang Elliott.

On our last morning, we tried to get spacious soundscape portraits of various songbirds. My favorite is that of a Carolina Chickadee, singing and calling excitedly at dawn from small tree not far from the Sabinal River. I like the mix of sound … the gurgling of the river and the variety of birds sounding off in the background, including Northern Cardinal, Black-crested Titmouse, Mourning Dove and White-tipped Dove. Note also the occasional gruff calls of the immature Great-Horned Owl in the distance.

Calls and songs of a Carolina Chickadee, given at the break of dawn along the Sabinal River at Lost Maples State Natural Area in the Hill Country of Texas. R7:25am, 8 March 2017. © Lang Elliott.

Altogether, our early-spring (late winter?) visit to Lost Maples was quite a success. I very much look forward to creating a podcast commemorating our experience. Hopefully, I’ll have it done and published within the next four or five days. I’ll be sure to alert you when it’s done!

I would love to hear your soundscapes on my Echo. Alexa has some relaxing soundscapes, but they can’t compare to your’s.
I wish I could say, “Alexa, play night frogs and crickets by Lang Elliott”, etc. etc.” …

Maybe down the road? But, then again, can’t you download titles from my store, bring them into iTunes and then have Echo play them?

<3 Super! love all the unique recordings

Click here to find out how.
wpDiscuz
3
0
Would love your thoughts, please comment.x
()
x
| Reply