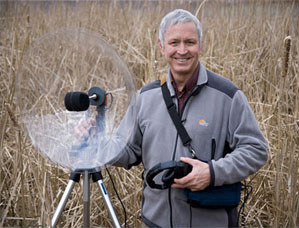 I earned my M.S. in Animal Behavior and Ecology from the University of Maryland in 1976, my master’s thesis focusing on the social behavior and foraging ecology of the eastern chipmunk (Smithsonian Contributions to Zoology, Number 265, 1978). After spending over a decade in the Adirondack Mountains of upstate New York teaching natural history courses and pursuing other endeavors, I moved to Ithaca, New York, and formed NatureSound Studio in 1989, a small business dedicated to creating products and services featuring the sounds of our native birds, frogs, insects, and mammals.

In the twenty years since forming my business, I have traveled widely gathering sound recordings and have authored numerous audio compact discs and books with CDs that feature the sounds of nature (see list below). My products and recordings have been purchased and enjoyed by at least a quarter million people, and likely many more. I have also become a premiere source of nature sound recordings for use in science and nature museums, nature centers, movies, and variety of third party products.

Notably, I authored, mastered, and provided most of the field recordings for the well-known Stokes Field Guide to Bird Songs, Eastern Region (Time Warner AudioBooks, 1997). This three compact disc set has been the gold-standard reference guide to eastern and central North American bird songs and calls for over a decade, and has trained a generation of avid young birders characterized by their extraordinary ability to recognize birds by their sounds.

Partnering with Houghton Mifflin Company in the late 1990s, I designed, packaged, authored or co-authored, and provided field recordings and photographs for five books accompanied by audio compact dics, including Common Birds and Their Songs (1998—nearly 100,000 sold!), Music of the Birds: A Celebration of Bird Song (1999), The Songs of Wild Birds (2006), The Songs of Insects (2007), and The Frogs and Toads of North America (spring 2009).

In addition to my own productions, I recently organized a world-class collection of bird song and call recordings made by himself and several partner-recordists. These recordings are featured on the newly renovated National Audubon Society’s web site, as well as in their mobile application for birds. They are also featured on the Sibley Guide to Birds mobile application and on various iBird applications. In addition, my recordings grace the Smithsonian Field Guide to the Birds (Collins, 2008). The same sound collection is featured in the BirdTunes iPhone app, developed by myself and Harold Mills.

I am also the co-inventor of the SongFinder, a special device that helps birder’s with high frequency hearing loss hear birds again.

After twenty-five years of steady productivity and considerable influence in the field of nature sound education, I have expanded the scope his work to a more general nature study theme. Along these lines, I founded Miracle of Nature, Inc., a non-profit dedicated to celebrating “nature near at hand,” with a focus on our native birds, frogs & toads, insects, reptiles, and mammals. I also launched musicofnature.com, an online source of premium-quality pure nature recordings for personal enjoyment and listening pleasure.

Currently, I am excitedly gathering high definition and 4K video and publishing my videos on this website and others. I am embracing artful cinematography that depicts the wonder and beauty of nature near at hand … focusing not only on life forms, but also on land and sky forms. My video footage will ultimately be combined with pure nature sound recordings to create immersive videos (perhaps even a movie or two) aimed at those who want to get lost in the miracle. A new book is also in the making … one that explores the various ways that we humans connect with nature and develop a lasting and heartfelt appreciation.

Please stay tuned … this bio will be periodically updated as I continue my journey!

Note: the above list of references does not include numerous audio compact-disc only titles, a number of which can be viewed at musicofnature.com.