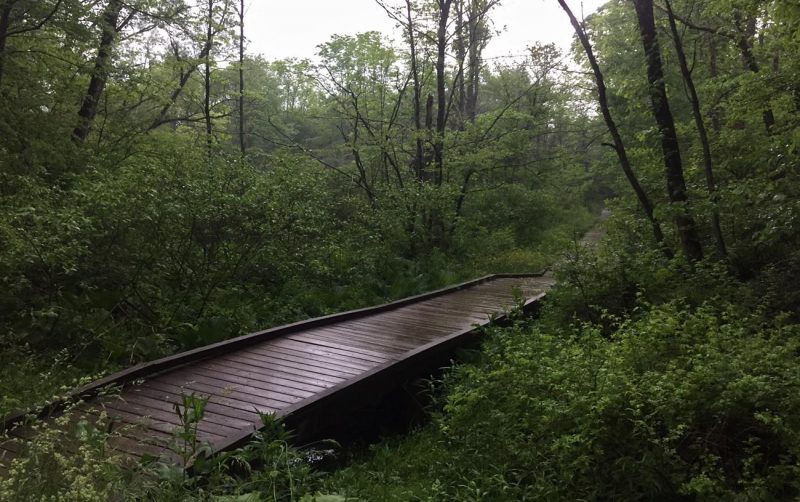 Thunderstorm along boardwalk at Erie National Wildlife Refuge. 5:30am, 2 June 2016, near Cambridge Springs in northwestern Pennsylvania. © Lang Elliott. Note: the low rumble of the thunder can only be fully appreciated by listening with headphones or speakers having good low frequency response.

In early June, at the end of my rather frenetic recording expedition, I visited a friend in the northwestern corner of Pennsylvania, not far from Erie. I spent one night there, sleeping on my friend’s porch and enjoying periods of heavy rain. As usual, I rose early. The rain had stopped, so I headed to a boardwalk trail in nearby Erie National Wildlife Refuge, hoping to record birds singing against a backdrop of drip from the trees.

Arriving on location at the break of dawn, I headed down the boardwalk but was surprised by a loud thunderclap followed by a major downpour. I ran full-speed back to my car. After about fifteen minutes, the heavy rain subsided, so I donned my rain jacket and ventured back on to the boardwalk, walking until I found shelter under a large hemlock tree that would protect my microphone from the drizzling rain.

Closing my eyes, I was struck by the simple beauty of the soundscape … the pitter-patter of the rain, subtle bird songs (including Scarlet Tanager and Wood Thrush), and distant thunder. I recorded for nearly twenty minutes, all the while completely absorbed by the sounds. I would have gone longer, but another downpour ensued that was so violent that it sent me once again running back to my car, with my rain jacket wrapped tightly around my recorder and microphone.

This was the last recording of my journey. That day, I drove back to Ithaca (my hometown), mostly in the rain, quite happy that my last capture was such a relaxing and immersive soundscape.

This is so very peaceful! I can almost smell the rain.

I do smell the rain!

Awakened to a cloudy day and praying for rain in Atlanta today. Nothing like the happy sounds of nature on a rainy day! Going to pass this on to my old friend Barbara Small Wooten to pass along to Gordon.

Hi there Susan! Are you Kenny’s sister? I’d love to hear from Gordon!

No, I’m his sister-in-law. I married Jim, the youngest brother next to Nancy. We graduated in 1970. I remember you, Gordon, and Mark Van Matre playing golf in the summer. Smalls were living on Melody Lane at that time. Jackie was Sharon’s age, and so I do have better memories of her. Bill Kallenbach is Jackie’s age. My parents were Ed and Virginia Buckner. Anyway, Jim and I have really enjoyed these recordings/videos! Will pass them along…

OK … got it, and glad to hear you like my recordings!

Just got home from work and have this playing in the background. I live in Seattle ( all my life) and consider the sound of rain one of the most relaxing and peaceful things. I sleep with a sound machine…rainfall

Given that you live up there in the Northwest, it’s a good thing that you enjoy the sound of rain! BTW, on of my favorite spots on earth is Cascade Pass, especially the trail leading up to the pass, plus high country beyond.

This recording is a treat! Want to listen to it over and over ….. Thank you.

Oh wait, I played it again and it started to sprinkle. I think I need to turn up the volume…

I turned up the volume and the fire-sprinklers sprayed water all over my computer … just kidding.

oh, here at Chautauqua we are so desperate for rain…it’s glorious
to hear it on your recording, with the wood thrush in the background.
-Margie

OK, time for everyone to do a rain dance. I promise to work double-time on my end.

Listening to this as i wish for the rain they have been promising for oh so long. Looks gloomy, but no rain…

What a beautiful recording. The sounds of our natural world just never cease to amaze me. To me this is one of your best. Thank you so much for sharing your passion and your talent with us. By the way, I really like the photo you chose to accompany today’s recording. Just right.

Yes, it is beautiful. My worry always has to do with how people listen. For instance, if someone listens to this recording using small speakers, the low rumble of the thunder would not be very audible. That would be a bad thing because those rumbles contribute greatly to one’s enjoyment. The photo was taken on location. I’m doing that for all my soundscapes these days. I even have plans to re-visit spots far and wide so as to get photos for old soundscapes, where I didn’t take any pics. For example, I have tons of great soundscapes from Florida, and… Read more »

beautiful job. so many thunder recordings are jarring. this is very soothing and delightful. love the mix of birds, including my favorite , the thrush.

Billie: I was so glad that the thunder was distant mellow. I have other recordings with jarring thunderclaps that are interesting and engaging, but certainly not relaxing and meditative.

Oh how I love the sound of a thunderstorm, and the rain in the trees! This is lovely. I so wish I had wood thrushes or veerys or hermit thrushes where I live. I might have to take a nap to this one!

have a happy nap … I just woke up from mine!

Thank you so much for sharing this recording. I love it. The sound of rain and distant thunder is very soothing for me. Thank you!

So oddly comforting, to feel safely cocooned while in the presence of such raw power of nature, perhaps the softening effect of distance and the fact that I am not getting a soaking. Found I drew deep breaths a few times expecting the energy of ozone. Something felt overall rather like napping with a very large huggable canine companion peacefully snoring nearby 🙂 Would love to have some of this rain, we are low here … S.E. PA. This is a stunning, surprisingly pleasing, easy/ meditative recording; thank you!

Sharon: We are also very dry here in upstate New York. Woodland streams are either totally lacking water or just have still pools there. Please send rain, and lots of it … I want to hear this soundscape in the here and now!

So very soothing. For me, there is healing power in this recording. Thank you Lang! Do you have equipment that could realistically record the sound of a heavy downpour? I would think that even if there were a way to keep the mics dry, the high volume of sound would overwhelm frequency response all over the place.

Marilyn: Yes, I can record a full downpour using a special “rain box” I developed. The problem is that it doesn’t sound very good. It becomes overwhelming, with so many raindrops that they all merge into one enormous sound. It’s rather disconcerting over speaker, though is quite impressive if you’re really there, in the middle of the downpour, not only hearing it but also feeling it.

As you might guess, gentle rain works way better for recording.

I thought that might be the case; too many audio inputs, so to speak. Wonder if that thrilling sound of heavy rain will ever be recorded as effectively as this. I think you pretty much have to be there. Thanks again!

yes, certain sound-thrills require the rest of the senses to be involved. High wind is another example … sounds like white noise when recorded, unless a wave of wind moves from one side to the other. Same goes for big waterfalls … just a big continuous whoosh over speakers, quite annoying actually.

For some reason, I always find the sound of distant thunder to be soothing. Ditto for the sound of this gentle rain.

distant thunder is certainly more soothing than thunder close-by. I was also glad that there were no sudden thunderclaps that would shake the listener out of the relaxed mode.

Click here to find out how.
wpDiscuz
35
0
Would love your thoughts, please comment.x
()
x
| Reply