Eastern Bluebird Dawn Song as part of an energetic dawn chorus at the edge of a meadow (featuring Chipping Sparrow dawn song too). 5:45am, 21 April 2010, Land Between the Lakes, Kentucky. © Lang Elliott. Please play at a low volume to simulate a natural listening experience. 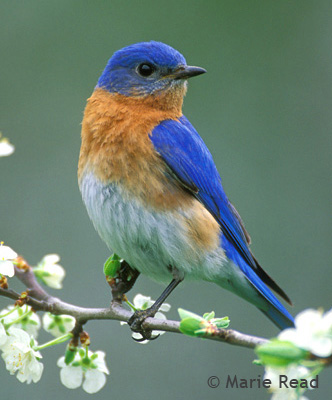 The song of the Eastern Bluebird is a delight to the ear, a series of bright, musical warbled phrases sounding like cheer … cheerily … cheer-cheerful-charmer. Females occasionally sing and sometimes answer their mate’s song with their own (female songs are usually rather brief).

At the crack of dawn, especially in areas where bluebirds are concentrated, males sing an excited song series that includes lots of sharp, staccato chit calls given before songs, and often delivered in a chattering group of two or three. Males may even sing in flight as they move from perch to perch. The above featured recording provides a typical example, recorded at the edge of a meadow in Kentucky.

The dawn song performance is brief, lasting twenty minutes or less, and many bluebird enthusiasts are actually unaware of its existence. Why? … because they don’t get up early enough to hear it! The presence of chit notes, which are usually given in alarm situations (see example below), betrays the high level of arousal among competing males during the dawn song melee.

Here is a close-and-clean example of a male bluebird singing dawn song:

Normal daytime song differs from dawn song in that it does not typically include chit calls. Daytime singing can also be quite laid-back, with long pauses between songs. Below is a very nice-sounding example of the “normal” daytime song pattern, captured during my first major recording expedition, way back in 1988, 28 years ago:

The common call note of the species is a musical turalee, given during all seasons. Thoreau was quite impressed by it and considered it to be the premiere sign of spring. When conditions were right, he felt that the environs called forth the sound such that the air over a field becomes “a foundry full of moulds for casting bluebird’s warbles.” Below is a splendid example, recorded by my friend Beth Bannister in Florida:

When pairs are nesting, they often exchange calls as they interact. These include sweet whistles, typical song-phrases, and other sounds. Below is an intimate and revealing recording that I made of a pair interacting in the vicinity of their nest in a meadow in upstate New York:

As mentioned in above, staccato chit calls are given in alarm situations and may be delivered in chattering groups. Below is a recording of excited chattering given after I inadvertently stumbled upon a nest in an old woodpecker hole in a dead stub at Land Between the Lakes, Kentucky. Note that musical whistles are also included at times:

Eastern Bluebird – alarm chips and whistles given at nest when approached. 8am, 2 May 1991, Land Between the Lakes, Kentucky © Lang Elliott.

Well … that’s about it … a fairly complete collection of recordings demonstrating the vocal repertoire of the Eastern Bluebird. The only recording that I am missing is a really good example of a male and female exchanging songs. Maybe luck will be with me next season, when I plan to be back on the road, passing through prime Bluebird country as spring unfolds.

As always, I would love to hear from you in the comment section below.

This is really awesome

Just ran across this post. I have been trying to train my ear to hear them and this helps. We helped raise two clutches this year, with the second not returning from their hide yet. When I ca hear them, it makes my heart happy until I can see them again

This is the second year I’ve had a nesting box with bluebirds, but the first year I’ve been privy to the delightful conversational calls between family members. Thank you for posting these!

Wow. Thank you for this information! I heard one this morning doing the dawn call, but it was well after dawn, about 7:30am or a little after. I also heard another BB calling in the distance. Was that an alarm call under those conditions? It went on for a while.

Ah, such a great sound! I have been trying to get bluebirds to my yard, they are in the fields all around me but my acre is among trees. I see them occasionally , but they don’t use the nest boxes. I have a bluebird feeder out now, with mealworms and chopped dried fruit. blue rags tied in the surrounding trees. As soon as I walk a bit down the road with my dogs I see and hear bluebirds, but cannot get them to my yard. I wonder if playing these recordings would help? Any suggestions?

We’re bluebird fans and loved your recordings. Do you know the meaning of the Dawn Song and the Turalee?

Nobody is certain about dawn song, but probably has to do with a burst of energy and aggression in the twilight of dawn, before there is enough light to go looking for food. A number of birds have special dawn songs. Especially flycatchers, sparrows, and warblers. Among the thrushes, the Eastern and Western Bluebirds have dawn songs (the Western sings in flight) and the American Robin also sings a special pattern at dawn.

The turalee? Well, it is though to be a simple contact call allowing mates or family groups to know where each other are.

Thank you so much, Lang! When I lived in Rappahannock County in Virginia we had several Eastern Bluebird broods each summer. One of my favorite experiences is watching the wing-wave courtships…

We have far too few hereabouts. They occur here for sure, but not in the numbers typical of your neck-of-the-woods.

It wasn’t easy, but we successfully raised 1 brood of 5 bluebirds in our yard. It was our first time trying. Had to evict house sparrows several times. Now our trees are full of dawn choruses like these! Hoping for a second brood, as the parents are still defending their house from inquisitive sparrows. Thanks, Lang for your great works!!

How exciting! Wish we had good numbers here in Ithaca. There are bluebirds, for sure, but not at all as many as in areas farther south, such as Land Between the Lakes Kentucky, where I’ve made many recordings.

wow, what a wonderful compilation. such a dear little bird. you can hardly help but have your hear lifted when you see or hear one.

They are sweet, both in appearance and sound. Everyone loves Bluebirds … at least I think?

the pair interaction is sweeter-than-sweet!

The male Bluebird is handsome, but the female is also very lovely w/ more grey & yellow then blue. They will be attracted to feeders w/ suet & they love berries 🙂 Great job as always Lang, you are our guide to beautiful bird songs! I’d love to hear the high pitched sound of a Hummingbird.

Ah … hummingbirds … I need to get some fresh new material. I have one example of the “swing dance” flight display of the Ruby-throated, but it’s not really very good. Maybe next season?

Could I hear the “Swing Dance” please when you have time to post it?

will send mp3 via email.