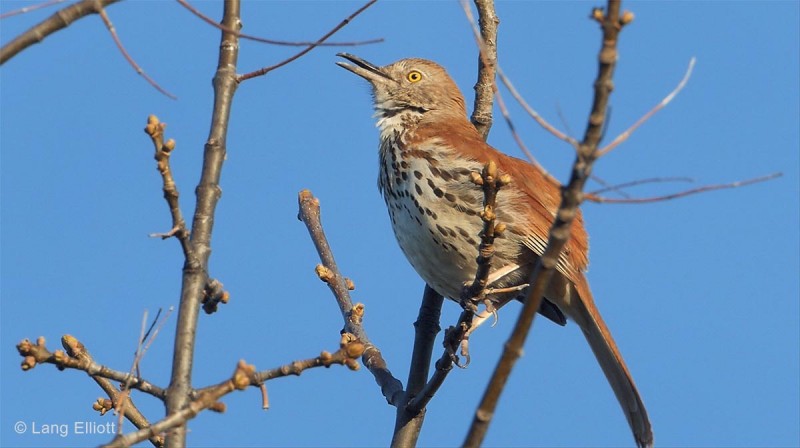 O frabjous day, the Brown Thrashers have arrived, nearly ten days earlier than last year! What a joyful surprise on this calm and sunny morning here in upstate New York … a truly welcome sign that spring is blossoming according to plan, and that Old Man Winter has lost his grip and will soon fade away.

At dawn, I arrived at nearby Finger Lakes National Forest. I checked out several locations and heard a number of the usual birds of early spring: song sparrows, cardinals, red-wingeds, grackles, flickers, sapsuckers, and a killdeer or two. My expectations of finding something new were low, but when I got out of my car at Willow Pond (a favorite spot), I immediately heard a familiar and treasured voice … that of a Brown Thrasher, energetically singing its doublet phrases from high in a maple tree.

With considerable pleasure and excitement, I gathered two recordings. One features me briefly chatting about the experience, with the thrasher singing in the background and water gurgling in the ditch next to the road. The other is a closer and cleaner portrait of the singer, with less water sounds. You will hear both recordings above, presented in sequence.

After finishing my recordings, I explored the area and soon found two more singing males … proof that a wave of males have arrived and are busy setting up their territories. How delighted I am. My next project will be to capture them singing in super high-definition video. I sure hope I can find a friendly singer who will allow me to get close enough for good results!

You may ask: “How does one recognize the song of the Brown Thrasher?” Well, the giveaway is that he “tends” to repeat each of his highly variable song phrases twice in a row before moving on to the next. In contrast, his cousin, the similar-sounding Northern Mockingbird, generally repeats phrases three or more times before moving on.

The thrasher’s notes are loud and musical, and you can hear a male singing from hundreds of feet away. Of considerable interest to biologists is that each male has a repertoire of over a thousand different song phrases, an enormous pool of sound to draw from as he sings.

Let us celebrate the Brown Thrasher, the bird that chants in doublets and who always has something new to say!

NOTE: As I listen to this thrasher, I notice that many of his phrases are not repeated twice. But many others are. Be aware that the “doublet” repetition is not a 100% thing. Nonetheless, and in spite of this singer drifting from the doublet pattern, his song is still easily recognized as that of a Brown Thrasher … why it’s just clear as a bell, and there’s no two ways about it, I would even venture to say!

p.s. the tapping sounds are from a Downy Woodpecker, looking for food on nearby limbs.

[…] two weeks ago, I posted a sound recording of Brown Thrasher singing, mentioning that I hoped to eventually get some cinematic footage as well. Now I have good […]

[…] two weeks ago, I posted a sound recording of Brown Thrasher singing, mentioning that I hoped to eventually get some cinematic footage as well. Now I have good […]

i am a huge fan of thrashers. They always make me laugh with their antics.

I so enjoy the recordings, along with your commentary, to help identify the birds. Don’t know if it’s my age and fading eyesight, or insufficient time to really seek them out, but I rarely see the wild ones well enough to ID them by appearance. Have consequently become a fangirl of their songs. So thanks again!

Most birders identify the vast majority of our songbirds by sound. So many of our native bird are very difficult to spot, especially those who sing from high in the canopy. Sound provides perhaps the best doorway into the lives of our birds.

They also arrived here near Spencer a couple days ago, about the 14th.

Thank you for sharing this lovely, musical performance by a Brown Thrasher, as well as your enthusiasm for spring.

Thank you, thank you, Lang! It brought tears to my eyes to hear this, not only the beautiful Thrasher, but your kind and gentle voice too…it feels like the privilege of birding with you, and sharing the joy of the moment. I have not seen you in many years, but it felt like a welcoming hug. I am so very grateful to you for sharing your gift of talent and love with all of us. The world is so vastly a better place because of it.

Thank you for your kind words Marilyn, blush, blush.

Wonderful spring sound Lang. We are waiting for the return of the pair that has nested on our property in previous seasons,and, if the BRTH is like several other species it should arrive promptly, about 1.5 weeks early compared with last year. Thank you for sharing your good work with all of us.

This is just lovely to listen to. I think I too have mistaken Brown Thrashers for Mockingbirds throughout my birding career. I had no idea how similar sounding they were. We just returned from a vacation on St. John, USVI where we enjoy the many Pearly Eyed Thrashers there (quite similar in appearance to Brown Thrashers) Very tame, opportunistic birds, always looking for a free meal which I enjoy but many people there find annoying. Their dawn and evening songs must be similar to Browns which explains why I kept looking around for a mockingbird!

Thank you for presenting us w/ not only the beautiful songs of the Thrasher, but of your kind & gentle sounding voice too 🙂

How do you compare the originality and/or song patterning of the Brown Thrasher to the Catbird, which has entertained me greatly over the years?

Burke: The Gray Catbird’s song is higher in pitch, much squeakier overall, and song phrases are almost never repeated. In addition, Catbird song is not as long-carrying as the fuller, lower-in-pitch songs of both the Brown Thrasher and Northern Mockingbird. That said, some of the lower-pitched song phrases of a Catbird might be mistaken for a phrase from a Brown Thrasher, but if you listen for ten or fifteen seconds, you’ll quickly realize your error. And, need I point out, the Catbird’s mew call is often interspersed with song and is a sure indicator of species.

Definitely a perfect song of spring. I am embarrassed to admit that i did not realize how similar the songs of thrashers are to mockingbirds. I believe i have always assumed i was hearing a mockingbird. Now i will be more aware. Loved the thrashers voice and hearing yours too! Ha, frabjous ( great word) and the jabberwocky took me back to 7th grade music class where we had to recite it!

Lovely! I love hearing birds of all kinds but this is an especially sweet song. What better way to begin a new day? 🙂

Remarkable! I will believe that Old Man Winter has lost his grip and will soon fade away in Northeastern Indiana IF it hits 70 tomorrow for the first time this year! We’re about 20 degrees below average and have been for weeks. Had several inches of snow last week….. What does this unusual weather do in the bird world? Today the sun was shining, in the 60’s, and every bird I saw had nesting material in their mouth. Do we have Brown Thrashers in NE Indiana? Do you know of a source for reliable bird/nature info specific to my area?… Read more »

Sarah: I’m sure you have Brown Thrashers, though I’m not certain how common they might be. As for bird info specific to your area, maybe these books will be of help:

Thanks, Lang,, for the references to birds in IN. I’ll check each one out!
Today’s Red Bellied is beautiful! When I check my in-box, you are the first email open! Great way to start the day!

What a joy to hear them sing. Mine have been busy building a nest. Hope as the weather warms, I will hear more singing. I am so glad I found your website.

Carolynn: Once mated, males sing way less. Around here, song is commonly heard for about two or three weeks after the males arrive, then singing tapers off considerably.

Ahhh, the Brown Thrasher…our state bird. I have one who loves to visit my feeder each day. Loved this recording Lang, and it was wonderful to hear your voice in the introduction.

I hope to be doing lots more on-location talking this coming season … Lang-Chats is what I’m calling them. No matter that my voice is somewhat comprised.

I was delighted to hear he had many notes in his repertoire.

more notes than you can shake a stick at!

What a cheerful good morning! Thank you for sharing!

Oh yea! One of my favourites. A stop-you-in-your-tracks bird. I think I am one overnight flight away (at the extreme west end of Lake Ontario) so will be listening for them Friday morning.

Peter: If one shows up in your neck-of-the-woods tomorrow, let me know. They’re undoubtedly on the move!

Exactly! Fair, fabulous, and joyess yes! A Brown Thrasher’s duet style song is wonderful to hear! Thanks Lang, for sharing. And thanks for sharing your “on the spot” comments. We feel almost like we’re with you!

John: I plan to do LOTS of on-the-spot chats this season, in spite of my radiation-impaired voice (though on a positive note, at least I can speak).

Ohhh, this is so so soooo beautiful, thank you. I am deeply grateful to this dear songster, and to the work that you do to share this with us. My heart is touched by Spring this day, thank you.

Lang, you are such a beautiful person! I consider myself Blessed to receive your emails! Truly, you are a gift to us all! Thank you for accepting your life’s calling to peer into the natural world and share what you see! I am grateful!

why thank you Marie!

YAY! If the Brown Thrashers are there where you are hopefully they will arrive back here soon too! Such a happy sound! THANK YOU for sharing! I so enjoy your “Music of Nature”!!!

Sounds pretty darn happy…both of you!

yep … two of us drunk with happiness, bird and bonehead, at the same time and the same place, although he was a good forty feet higher than me.

O Frabjous Day! Indeed. I love Brown Thrashers (Georgia!). For so long, I thought the Brown Thrashers were making the song that the Wood Thrushes make because when I heard the Wood Thrush sing, I’d run outside only to see a Brown Thrasher (recognizable) standing about. It felt like a new discovery. AND TODAY, I had to google frabjous! I listened to Neil Gaiman recite from memory, Jabberwocky, in the cold snow landscape. I wondered if a Brown Thrasher would pop into view before he finished but…no. THANK YOU for this amazing web-connection.

Gena: Glad to hear you figured out the “frabjous” thing. I rather like that expression and use it a lot, maybe too often.

Click here to find out how.
wpDiscuz
39
0
Would love your thoughts, please comment.x
()
x
| Reply