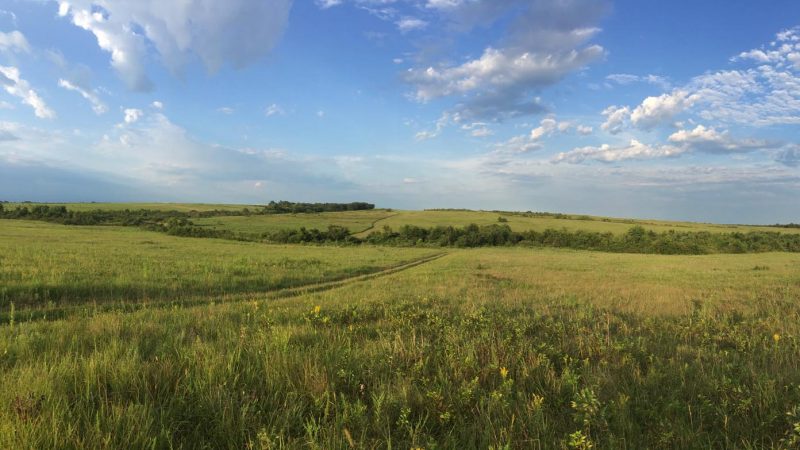 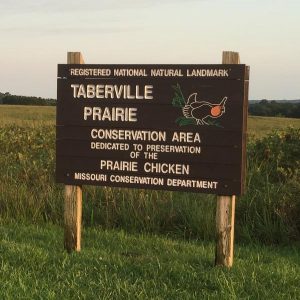 From August 1-2 of this year, I visited two tallgrass prairie locations in southwestern Missouri. Pictured above is the Taberville Prairie Conservation Area, a beautiful refuge with a sweeping view from the parking lot. About an hour to the west, the Prairie State Park also sports wonderful expanses of prairie grassland.

Visiting the Taberville Prairie at the break of dawn, I was both surprised and delighted by the frenzied chorus of Dickcissels (featured above), their excited songs ringing clear from the sumacs and other shrubs near the parking lot. It sounded like the height of spring (I imagine that Dickcissels breed more than once, which would account for the sheer volume of this late summer chorus).

Not much else was going on, except for the constant calling of crickets and meadow katydids. I did, however, come across a lone Henslow’s Sparrow, singing intermittently from tall grass. I managed to record seven songs before he flew away and then fell silent. Here is the recording … he’s loud and close, so you should be able to easily distinguish his high-pitched insect-like song from the more distant songs of dickcissels and crickets.

At nearby Prairie State Park, I also had good luck. Arriving late in the evening, I spooked several Great Horned Owls as I drove by their perches along the edge of the road. Returning around midnight, I discovered an immature owl, sounding off a good distance down the road. So I grabbed my parabola and slowly walked closer and closer, until I got the following recording of its harsh screeches, set against a rich chorus of insects (listen also for the calls of a more distant immature):

I drove the park roads, stopping and listening at various locations. Soon I discovered a Northern Mole Cricket, chirping excitedly from a wet area at a bridge crossing. I set up my soundscape microphone to obtain a portrait, featuring the mole cricket at the low end (recognized by its regular chirps) and quite a number of higher-pitched insect songs, providing a rich layering of frequencies right up to the limit of human hearing. I happily began my recording and was even more happily surprised by a sudden interruption:

Coyote barks and howls, along with a chirping Northern Mole Cricket and a variety of other crickets, katydids, and coneheads. 11:50pm, 1 August 2016. Prairie State Park near Lamar Heights, Missouri. © Lang Elliott.

The next morning at dawn, I was greeted by another unexpected surprise … a Summer Tanager singing its special “dawn song” from a fence post not far from the campground. It’s early August, I really didn’t expect to hear a tanager singing so loudly and clearly:

So there you have it, five pretty decent recordings from my brief day-long visit to tallgrass prairie habitat. I also gathered various insect portraits and some nice cicada choruses from the campground, but I’ve decided to save those for future podcasts, where I plan interweave narrated stories about my adventures with my sound recordings in order to more realistically convey the quality of my experiences in the field.

hi i am a robot grrrrrrrr

[…] August Prairiesong is a true-to-life recounting of my early August visit to Taberville Prairie Conservation Area and Prairie State Park, both being tallgrass prairie preserves located in southwestern Missouri. I wasn’t sure what I’d find happening in these prairie tracts so late in the summer, but I was pleasantly surprised … a variety of birds were still sounding off, the insect choruses were splendid, and I snagged some coyote as well. As you might remember, I shared some of these recordings in a previous blog post, entitled Journey Highlights #2 – Tallgrass Prairie. […]

I really enjoyed hearing all your recordings, but especially the Great Horned Owl, Coyote, and Summer Tanager.

How lovely! Very evocative recordings that made me feel like I was there 🙂

I’m so happy that this arrive in my email today. What a pleasure to listen to the sounds of the prairie while finishing the morning coffee in Brooklyn! I’m sending your post to a few friends from Missouri. Thanks for continuing to share such beauty with us, Lang.

Looking forward to your podcast, you have a knack for teaching and sharing the wonders of our universe that not many experience. Have you ever thought of teaching how you go about the whole process, the rest of the story.

I may indeed write a book about “process,” but I’m not quite ready to do that. First there will be a book about listening nature … the different ways of listening-to and appreciating our natural soundscape.

But no song of western meadow lark, which I heard during a year in Colorado. Next time?

Western Meadowlarks actually do not occur in the locations I visited. Eastern Meadowlarks do, but I didn’t hear one sing anywhere in the prairie areas I visited, both in MO and OK, so I guess they’re basically done for the season.

How nice to have this appear in my inbox this morning! We have a section of our property dedicated to prairie restoration and this inspires me to get out during the midnight hours. (I can get the coyote calls all the time, though…love them!) Thanks for another great listen, Lang.

Lang, These are all great! I shared with (displaced in TN) Missouri friends who, like me, are amazed and so appreciative of your efforts. Thrilled that your epic journey went so well. Bravo! Wow, thousands of miles and thousands of wonderful soundscapes. Thanks for sharing once again!

Lynn, I only wish there were “thousands” of soundscapes from the trip. Results were definitely on the thin side, though I am glad I went on the trip.

I trust your firefly season went well? And how long did the drums keeping singing this year? Is there’s an extended breeding season, or do they blow it all in a few weeks time?

Well, okay, maybe a little soundscape exaggeration! But glad you made the trip. Firefly season intense and productive, thanks. Yes, the drumming drum did indeed have a very sudden and distinct almost 3 week period, in our patch of Beaver Creek at least. They began the very end of May and became silent again by the 3rd week of June. The loudest drumming in late afternoon until dark. Happy listening and recording!

What a beautiful blog!

Nice, Lang!
I remember Taberville Prairie from 2005. You told me about it being a good spot for Henslow’s Sparrows and indeed I got my best photos of that species from there. I also remember it being as hot as hell even in late April!