Drumming of the Drums 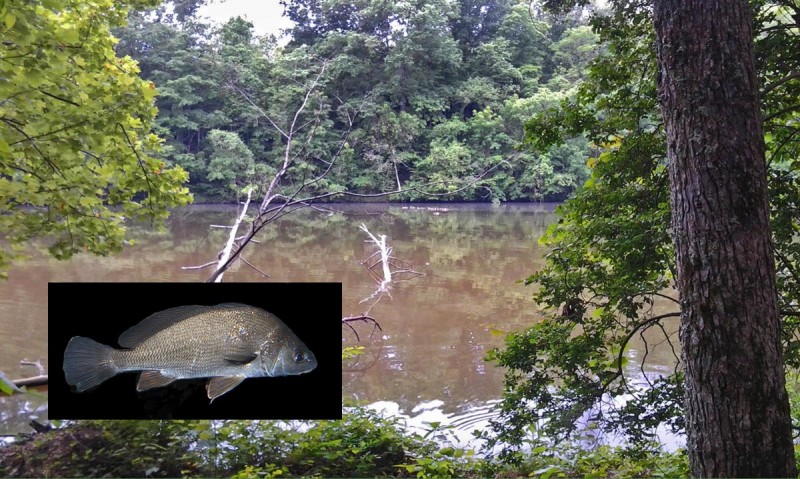 It all began in April of 2015 when Lang posted his hydrophone recording of the underwater calls of Pickerel Frogs. That amazing sound track reminded me (only slightly) of the booming, roaring sounds that have accompanied my summer swims in Beaver Creek in Knox County TN for the past 40 years. Beaver Creek flows into the former Clinch River (now TVA’s Melton Hill Lake) and is just a stone’s throw upstream from where the Manhattan Project occurred during WWII (yes, I suspect after all these decades of swimming in these waters, I might glow in the dark, just like fireflies).

We had always assumed they were male Freshwater Drum fish (Aplodinotus grunniens) sounding their mating calls (referred to as “drumming”) in our murky water each June, but we had never actually SEEN the callers. Now with Lang’s frog recordings, I began to doubt our long held, but non-confirmed, belief that fish were making these eerie snoring sounds. Next, in my quest to determine once and for all whether I was listening to fish or frogs or maybe even our local oft-reported “skunk-ape” or smaller “skunk-monkey”, I stumbled on Bob English’s wonderful Frog and Toad ID page, which has information and recordings of all the Tennessee frogs and toads. Now I was doubly confused because my Beaver Creek rumblers sounded suspiciously like the rare Gopher Frogs described and recorded on the LEAPS site. 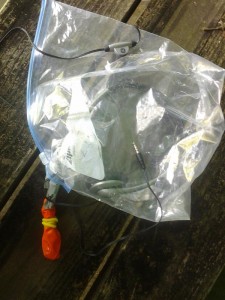 By June, my Beaver Creek growlers were really going strong. I determined to record them so someone more knowledgeable than I could positively ID them. Little did I know how expensive and difficult to obtain hydrophones are. I have zero technical ability and was too tight to buy a real hydrophone, so I fashioned one out of an old balloon, a ponytail holder, a cell phone headset, duct tape and of course, a ziplock bag (see pic). The growlers appear to gather in larger numbers in certain areas of the creek, so there I was treading water frantically while trying to keep my voice recorder out of the water with one hand, yet holding my balloon covered microphone under the water with the other hand.

Eventually I realized my cell phone recorded better than my older voice recorder. I also came to accept that it was a matter of time until either I drowned or dunked and ruined the entire shebang. So, I switched to the kayak and my cell phone, both of which enabled these recordings. Though on peak evenings I can hear the drum through the thin sides of the kayak, it is best heard and experienced while swimming on your back gazing at the lovely green water or forested shoreline or the burning sunset with your ears submerged entirely.

Later, fish expert and friend David Etnier and audio recorder Rodney Rountree, along with Bob English, confirmed these were indeed Freshwater Drum male courtship calls. My hope is in the future Lang will use his superior skills to do better justice to these otherworldly drum symphonies.

It occurred to me then as it does every time I listen to one of Lang’s new recordings how little we know or understand about our fresh (and salt) water underwater world, even when sitting in a boat right above. Heck, even the above ground sounds blow my mind: Porcupines sounding like groaning women, beavers cooing in the most precious way, singing lovesick turtles and on and on. Thanks Lang!

HOW DOES THE DRUM FISH MAKE SOUND?: The Freshwater Drum doesn’t have vocal chords like we do. Instead, the fish produce sound with a special set of muscles in their body cavity that vibrate against the swim bladder, the bladder acting as a resonation chamber. Only mature males produce the drumming sound, and it is assumed to be linked to spawning. 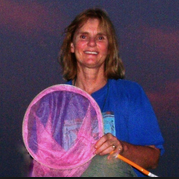 About the Author: Lynn Frierson Faust, a lifelong naturalist with an inordinate fondness for fireflies, is equally taken with almost any wild thing that croaks, crawls, climbs, flies, swims, sings, chortles, leaps, gallops, hops, slithers or twinkles in the sky. She is also passionate about teaching reading to struggling readers and mentoring at risk children. She is at home in the green gentle hills of East Tennessee with her husband Edgar. Their three grown sons and two fine grandchildren all share her enthusiasm for our natural world. Her peer reviewed book on fireflies (750 color photos covering 70+ species), the first of its kind, will be available for early order Sept 2016 and on the shelves by early 2017 from University of Georgia Press: Fireflies, Glow-worms and Lightning Bugs! Identification and Natural History of the Fireflies of the Eastern and Central United States and Canada.

Hi Lang, Since you got me really focused on my drum fish drumming, I paid close attention this year to just exactly when the drum began calling and when they stopped, seemingly for the season. I had never actually thought much about it until this summer. So, in East Tennessee, up the Beaver Creek embayment of Melton Hill Lake (former Clinch River) they began May 28, 2016 and had completely stopped by June 20. Their hours of calling seemed to stretch longer at peak season when I could hear the most males calling. I could hear them from 4 pm… Read more »

It is very weird to hear a fish making sounds, but interesting, we learn something every day.

Untold numbers of people have wondered what was wrong with their boats when drum sounds were heard through the hulls. Often, during drum breeding season, I’ll see a boat with the deck lids up and a guy peering into the bilge, wondering what was wrong with the boat. Night fishermen who anchor and fish quietly are familiar with the sound, although they may not know the source.

Paul: That is really funny to hear. I’ve heard the same concerning a fish called the “Midshipman,” found in San Francisco Bay. They produce a humming noise that is a continuous pure tone. Check out this video from Youtube:

Those “midshipmen” are amazing and really do sound like a malfunctioning engine. Their life cycle is equally fascinating according to “the google”. BTW, Paul’s humorous comments of befuddled boat owners above stem from his years of being a fisheries officer for the TN Fish and Wildlife Agency on the lakes of Tennessee. For anyone curious is to whether they might have drum drumming in their nearby waterways, Roughfish.com has a really nice range map. Even as far north as some of the Great Lakes their mating season can begin as early as May, so be listening! Mary Ellen, I am… Read more »

Loved meeting this lady and hearing about the drumfish. Sharing so my daughter (a nature nut from earliest childhood) can enjoy

Thanks Mary Ellen. I’m testing the feasibility of having others do “guest posts,” when they have a nice sound recording and story to tell about it. It seems this post went over well, so I’m likely to try it again sometime soon. I have lots of friends who are nature recordists, and I’ll bet many of them have great stories to tell.

Very interesting project. I work on a research vessel on Lake Erie with grade 7-12 students and we are using a hydrophone this season to record and identify aquatic sounds of spring by macro invertebrates and fish. I am pleased that someone else is bringing theses sounds to the surface. Nice work!

You’re welcome Bradford. I hope to some hydrophone projects this summer, to see if I can get some more underwater frog sounds plus invertebrates. I plan to use two hydrophones placed about fifteen feet apart for a stereo effect.

Lynn, Very interesting. You are always up to something, endless curiosity, and energy. Thanks for sending this link. I forwarded it to naturalist wildlife friends, so if you hear from Lary Reeves, Lizzie Paulus, or Danielle Abbey, I sent them your way.

I am not a fish person. Is this the same type of fish that leaves its earbones behind to become “lucky stones” on the beaches?

Yes, probably Bonnie. The freshwater drum’s amazing otoliths (google for cool photo and details) have been prized by humans since prehistoric times up to today. Have you found one?

Bonnie: Indeed it is. Here is what I found on Wikipedia: “A lucky stone is actually the unique ear bone or otolith of a Freshwater Drum (Aplodinotus grunniens), commonly known as the Sheephead Fish. The Sheephead’s otoliths are quite large and look almost polished and ivory-like. In times past they have been worn as protective amulets, made into jewelry, and traded into areas far from the fish’s native range (such as Utah and California). Lucky stones (otoliths) have been found at ancient archaeological sites, where they are thought to have been used as good luck charms to ward off illness.”

Here’s a photo of the Freshwater Drum otoliths that I found by googling.

Hey all, Thanks Lori Jo, Christopher, Jane, Gena, Rebecca and of course Lang for your kind words, help and good questions. It is fun finding folks who think it is as cool as i do. If i had a magic wand, i would make the murky water clear enough just long enough to actually see all those drumming drums. I am going to pay much closer attention this season to how long this drumming actually lasts. Lynn

Lynn: I sure hope I get a chance to record them … maybe this summer sometime? I want to do it in stereo, to capture the full impact of the symphony.

Your over-the-top efforts are very appreciated!!!

My gosh … look at all the avatars that are now showing up! Thank you everyone for going to the trouble to upload thumbnails at gravatar.com. It’s really nice to see everyone’s faces!

Neat. I’m wondering exactly how the fish create the sounds.

Good question Chris. I’ll add a note about this to the bottom of the post.