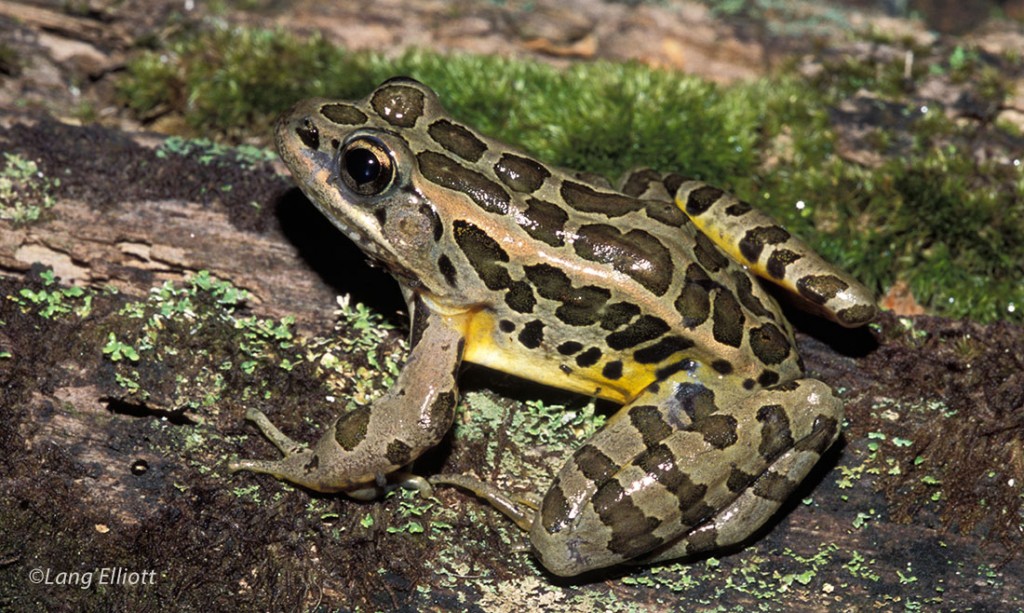 Last year I purchased a pair of hydrophones so that I could make underwater recordings. I never used them in the field until last night, when I decided to throw them into our backyard pond to see how the peeps of Spring Peepers would sound. Standing along the edge of the pond, I threw the two microphones about ten feet out into the pond, placing them about ten feet apart for a stereo effect, and then monitoring over headphones.

To my complete surprise and disbelief, there was quite a bit more going on than just the peeping of the peepers. which is all I could hear above water. There were loud snoring sounds, and a variety of chucking and stuttering calls. How could this be … none of these sounds were audible to me if I took off the headphones and listened to only the airborne sounds:

Luckily, I recognized the patterns. Apparently, they are the snores and croaks of Pickerel Frogs, Rana [Lithobates] palustris, which are somewhat common in my area, though I’ve never seen or heard them in our backyard pond. Pickerel Frogs are recognized by the two rows of square spots on their backs, They are known to call underwater, though I always presumed they did this only when frightened, when caused to submerge. In this case, ALL of their calling seemed to be underwater. I’ve heard plenty of Pickerel Frog snore in airborne situations here in upstate New York, usually during the month May, and they are very easy to hear. But last night, the calling seemed to be entirely underwater. Is this unusual? Or does it happen most of the time?

Below are typical above-water recordings for comparison. While the sounds recorded underwater seem more high-pitched and “tinny” than above-water calls, the snoring pattern is unmistakable, as are the occasional croaks or grunts. I’ll have to do a thorough search in the daylight to see if I can find a Pickerel Frog or two along the edge of the pond!

Surely, I have this figured out, unless there’s some strange aquatic insect that snores and croaks like a frog … maybe a Giant Waterbug having a really bad dream?

Really interesting. I wish I had read this last week as I drove 250 miles to eastern Texas over the weekend hoping to capture some palustris calls. I wish I had known to bring my hydrophone and listen because the airborne calls of other species were deafening and probably drowned out the Pickerel Frogs.

That would have been interesting, to see if the airborne calls were completely squelched. Of course, Pickerel Frogs do call above water and I have no idea if they’d be calling both above and below. I remember recording an individual long ago that was giving above-water calls and then suddenly submerged but kept calling … I was close enough to hear (and record) the muffled underwater snores.

I love all your work, Lang, and the website looks terrific. These pickerel frog recordings may help solve a mystery we have been discussing about odd growling sounds we hear underwater in Beaver Creek in TN. Thanks so for sharing your talents and nature with us all!

Lynn: Please let me know if the Pickerel Frog proves to be the mystery growler of Beaver Creek! Once long ago I was recording one that was calling above-water when it suddenly submerged … then I could hear the muffled underwater growls through my headphones. Nonetheless, I was completely surprised to discover an underwater chorus happening in our backyard pond, while no airborne growls were audible from the shoreline.

I love your work Lang – used The Songs of Insects last summer to identify the glorious Black-legged Meadow Katydid in my neighborhood. Your pickerel frog observation is intriguing. On April 2oth near Georgetown Ontario I found a pickerel frog clasping a spotted salamander in a copulatory embrace. Now I understand that in spring ponds cases of mistaken identity on the part of male amphibians do occur, but what puzzled me was the fact that this behaviour was occurring before the usual time of pickerel frog breeding which occurs here in May. Moreover, I heard no pickerel frog vocalizations –… Read more »

I went out the next night and waited for a number of minutes, finally hearing an above-water snore on the other side of the pond. So they are in my pond and my guess is that most of their early singing is underwater. I checked with herpetologist Carl Gerhardt and he said he didn’t know of any detailed studies of the calling behavior of the species, but I wonder if there’s something buried in the scientific literature … perhaps an undergrad somewhere who did it as a special project. There is/was a species out West, the Ramsey Canyon Leopard Frog,… Read more »

Lang, this is great! I only have a couple of recordings of Pickerel Frogs because I so seldom get to hear them. Who would have thought that you’d even have a recording from under water! Thanks , too, for the above and below water comparison.

Lisa: Tonight I sat by the shoreline for some minutes and finally heard an above-water snore on the other side of the pond … so Pickerel Frogs are definitely in the pond. Thunderstorms were approaching, so I was unable to try the hydrophones again. Maybe later this week!