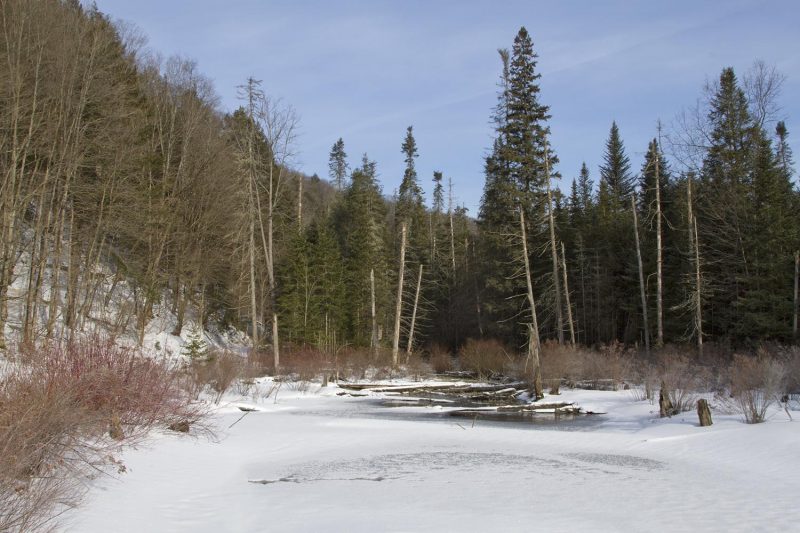 “Winter Birdscape” … the gentle trickle of a brook with a variety of bird sounds. Recorded in Shindagin Hollow near Brooktondale, New York. © Lang Elliott (with help from Peter Weidmann).

Winter is generally quiet here in the rolling hills of upstate New York, with the exception of the gurgle of brooks, wind in the trees, and occasional bird sounds. A few years ago, I made a special effort to record winter soundscapes. For the most part, I was not that successful … one gets tired of just recording water speaking water. But on one ocassion, I got lucky!

The featured recording, made in late winter of 2013, portrays the delicate voice of a small mountain brook, but also includes the calls and songs of five species of winter birds. At the beginning, a lone Blue Jay flies-in, giving its raucous jay-calls. Then a Pileated Woodpecker sounds off with its laugh-like outburst, followed by a series of drums. Listen also for two “squeaky-wheel” calls of the Blue Jay, plus calls of another jay way off in the distant. Next a White-breasted Nuthatch chimes-in with a long-continued series of nasal songs: ha-ha-ha-ha-ha-ha-ha. There is also a Black-capped Chickadee singing nearby, it’s thin whistled songs adding a hint of musicality to the chorus: fee-bee-ee. At the end, an American Crow flies near, its loud caws gradually fading into the distance.

I rather like this soundscape (which I’ve “densified” a bit so that you hear all five species in the ten minute sample). Some folks don’t appreciate the steely calls of Blue Jays, but I do, as long as they keep their distance. They are certainly a common fixture of the winter soundscape.

Let me know what you think of this recording. Do you find it relaxing? Do you want to loop it for a longer listening experience? I could play it softly all day without tiring of it, but others may have a different reaction.

p.s. Many thanks to Peter Weidmann, who helped with the gathering of this and other winter soundscape recordings.

It sounds very pretty! These are somewhat similar to the bird sounds from my area so I enjoyed it quite a bit.

sara: I’ll take that as a compliment!

Marvelous. I finally realized that I had to wait a long time for it to load, but I’m listening now.

Trudy: Glad you got to hear it. Maybe your connection was slow?

Very nice!
A few days ago I heard a low musical call and slowly moved around the curve in the trail to see what it was. A mockingbird,the first I’d heard since fall. Saturday they were all busy singing and chasing each other. Guess it’s time to set up territories.

A mockingbird, huh? That’s cool, although it’s not unusual to hear singing during the winter months, especially down south. Mockers are one of several species that maintain winter territories, at least to some degree (another example being the Carolina Wren).

Lovely, thank you. In recent days I believe I’ve heard a change in some of the bird calls, here on Cape Cod, ones that sound the promise that daylight is lengthening, and Spring will return. Have you noticed?

Terry: Yesterday, I heard my first Tufted Titmouse singing intermittently in our yard. Plus a distant woodpecker drumming (not sure which species). Spring is already underway!

Thanks, Lang. I was feeling sad and disappointed and this recording drew me out of myself and filled me with peace. I really miss being out in nature when winter sets in.

Deborah: Glad to hear it had this effect, which is just what I was hoping for. Capturing the voices of nature so that they have a healing effect is definitely a challenge.

What a lovely way to start our morning, it immediately put me at peace and transported me to a winter’s forest. I love the sound memories your recordings trigger in me! Thank you for this gift!

Robin: Thank you so much. I am very glad to hear that “Winter Birdscape” evoked evoked a peaceful “sound memory” … that’s fairly good proof that I was successful at capturing an enjoyable and healing soundscape (which is one of my primary goals).

thank you so much Lang i love it, sound of water make me relax and happy i looking forward to see video of water and birds it is lovely

Thanks, Lang. Even with the jays wake-up calls, the water sounds put me right to sleep.

This is lovely, and the water has a Japanese brushstrokes quality to it, maybe resembling light bamboo wind chimes tinkling in their slightly muted (wooden) way. Curious and interesting! Birds do help us make it through the winter up here. Thanks, and happy trails 🙂

Sharon: You have quite a way with words … I’m envious!

I’m from back east. In California now. I appreciate experiencing 10 minutes of time in the New York wilderness. I’m keeping this to meditate to!

Donna: glad to hear that it reminds you of home!

I’m having trouble getting the sound to play…other sounds play, all is well on that end. I have a Mac with OS Sierra, Safari. I’ve listened to your sounds before, but not this time. Anyway, love your recordings.

Trudy: I have no idea what might be going wrong. Do sounds on my other blog posts work for you?

Won’t play on my iPhone. All your others do.

Not sure what’s going on. It plays fine on my iPhone and the html code is the same as I always use.

No I can’t play anything of yours. I can listen to sound files on All About Birds, and You Tube videos. What program or plug in etc. would Mac Sierra use to listen to your sound files from this website?

Sounds in nature are few in winter, therefore all the more cherished. I love the sound of flowing water, as it always soothes, and the distant soft calls of the birds add to that. However, the shrill calls of the blue jays intrudes into that harmony. Is there any way to soften them to make the decibels equal to the other birds?

Ah … I was afraid those jays might not sound good to certain ears. And yes, I could push them back a bit, or else take some away so that there are fewer calls.

You really hit the jackpot for a winter day! Love it!

So far, nobody has complained!

P.S. I find this soothing. It is so natural that when I was writing my previous comment, I got a phone call that distracted me and when I heard the next jay calls after the call ended, I had already forgotten that it was a recording.

the true test of a soundscape recording is that it promotes a sense of really being there.

I like blue jays too. They can be so cocky and sometimes almost clown-like – except when they are stealing eggs from another bird’s nest or eating the paint off my house. I learned that they do that to get the calcium, so I’ve started putting out eggshells for them and that seems to stop the pillaging. Do blue jays also make a sound that sounds like a stone kerplunking into water?

Blue Jays make a huge variety of calls, so I would not be surprised to hear one ho kerplunk!

nothing more smile inducing than a chickadee making the “sweetie” call

… and singing with lots of snow on the ground … then know spring is just around the corner!

This transported me from suburban NJ to the forest. Thank you.

Beautiful winter sound scape. I find it very soothing and relaxing and the individual bird and flowing water sounds are wonderfly blended in sound volume. Fantastic. Thanks Lang for a delightful experience.

Thanks Sam … it is certainly one of my favorite winter soundscapes. In fact, it might be difficult to do any better.

I too believe that I could listen to this being played softly ,while reading a good book. I grew up in upstate NY and moved away after college. I miss the sounds of home -especially when I mostly hear sirens and traffic .(suburban life I guess)but it takes me back in time to playing outside in the snow and sledding with friends. Fond memories of growing up in the country. I thank you for all your music of nature !
Pamela

Click here to find out how.
wpDiscuz
44
0
Would love your thoughts, please comment.x
()
x
| Reply