Wind Over the Ridge 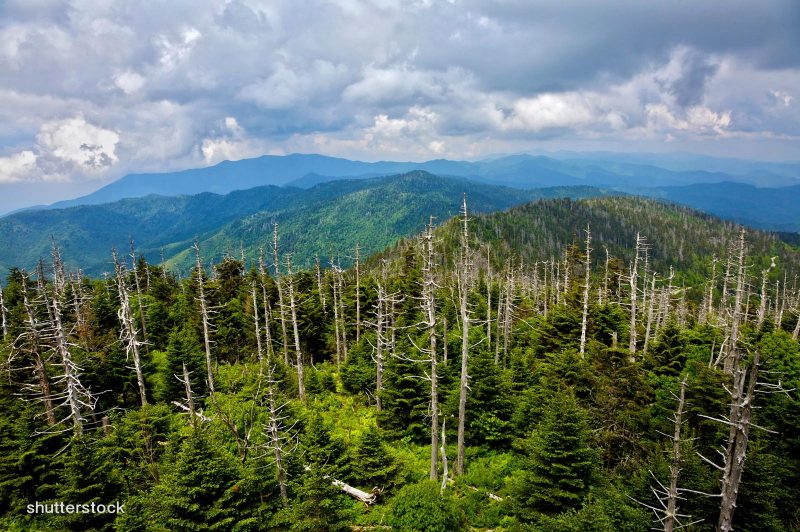 Don your headphones and join me on a windy, forested ridge in Great Smoky Mountains National Park! Experience and enjoy a soothing binaural immersion featuring not only the wind, but also a panoply of bird songs typical of high altitude spruce-fir forest in the southern Appalachians (be sure to listen using headphones … otherwise it may sound like a bunch of noise!). 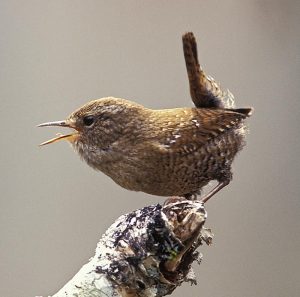 It was mid-May in 2010. I was traveling in an old Chevy van and had just spent the night in a pullout along the ridge-road that leads to Clingman’s Dome. I rose at the break of dawn and was disappointed at all the wind (although it would periodically settle down for a minute or two, only to rise again in intensity). Deciding not to be stymied, I ventured into the spruce-fir stand and soon homed-in on a Winter Wren, singing excitedly from a low branch. I quickly set up my soundscape microphone, placed it in a special “wind box” (see below for more information) and then hit record. Everything went well for about twenty minutes, but then a sudden rush of traffic on the highway put an end to my effort.

I’m quite pleased with this spacious soundscape. It features the songs and calls of a number of birds (plus a mammal sound). At the beginning, note the prominent songs of a Winter Wren and a Black-capped Chickadee, followed over time by the caws of American Crows, scratching sounds of a Red Squirrel, the squeaky songs of a Gray Catbird, the rising zhree-zhree-zhree-zeeee of a Black-throated Blue Warbler, the sprightly pleased, pleased, pleased t’meet’cha! of a Chestnut-sided Warbler, and finally the soft musical whistles of a Robin.

What makes a great wind recording? One important aspect is “spaciousness,” meaning a wide soundstage within which wind moves around. If all the wind were in one place, the listening experience would be boring. Likewise, who wants to hear wind that doesn’t vary in intensity? The most pleasing wind soundscapes (at least to my ear) are those where the wind moves around, sometimes unpredictably, and also varies greatly in intensity, from gentle breezes to huge gusts that threaten to overwhelm the soundstage. What makes a great wind recording? The answer my friend is blowin’ in the wind … the answer is blowin’ in the wind.

Recording the sounds of wind blowing in the trees is more difficult than you think. The big problem is that my soundscape microphone is quite sensitive to wind (as are all microphones)—not the sound of the wind itself, but rather the effect of the wind buffeting against the mic, thereby causing sudden pressure changes that produce annoying distortions that I call “wind thumping.” Such thumping is to be avoided because it pretty much wrecks a soundscape recording. So in situations such as this, I place my mic inside a specially-constructed homemade “wind box” that greatly reduces or even eliminates the thumping.

Thank goodness for my wind box … without it this recording would have been an absolute disaster! As it is, all I had to do was repair some subtle resonation-tones caused by wind wrapping around the box itself, plus remove one section where the wind roared through the understory with such intensity that it made my wind box shake. Altogether, I think my efforts were a success.

Relax and enjoy! And as always, please leave a comment below to let me know what you think of this recording.

I hope it’s not to much to ask, but can you go down there and try to record all the sounds of frogs there? I’m wondering what sounds the frogs there make.

In the mountainous areas, there is not a lot of frog calling because there are few permanent ponds and pools … mostly just running water in streams. However, if you find ponds and swampy areas, you may possibly hear spring peepers, american toads, gray tree frogs, green frogs, bullfrogs, pickerel frogs, woods frogs, leopard frogs, and maybe even mountain chorus frogs. Quite a few species, actually, and certainly enough to brighten one’s day (at least in the spring and early summer when they’re breeding).

Yes, I have heard spring peepers and Upland chorus frogs. Our property we’re moving to has many springs and small creeks and a medium sized one that trout would live in. My cousin and my little brother caught a pickerel frog. Note the springs have many pools and salamanders. But we will be digging a pond soon, maybe it will attract some?

Im about to move there, I love that place.

Thank you for the great nature sounds.

This recording sounds better than the real thing!

For me, the ebb and flow of the wind is soothing and settling and the perfect backdrop for the amazing and measured sequence of bird songs, and some of my favorite songs at that! This soundscape transports. How fortuitous that you captured this gem just when it looked bleak. This is one of my favorites!

Capturing the wheezy Black-throated Blue in a howling wind is real skill. Thoroughly enjoyed this.

As with every recording, I feel as if I’ve traveled to a new & magical place. thank you Lang for taking me on this journey with you 🙂
Peace & “Happy New Year”!

And a Happy Year to you Rose Anne … snow on the ground today here in upstate New York, but spring will be here before we know it! In fact, the Great Horned Owls are no doubt already hooting in anticipation.

This is intensely sensuous, the sweetly normal singing of birds and jet-strong winds juxtaposed. I get goosebumps and snuggle into the comforter to enjoy this. Very exciting in good ways, wildly wonderful! Phew!

Wow, a winter wren! and a Black-throated blue…can life get any better?

Life can’t get any better than that, at least if you’re a birder!

I love it Lang,- the rising and falling wind provides a wonderful backdrop to the varied feathered, flying, climbing friends who stop by for a time. I liked the fly and was curious about what she/he was searching for:)

Siobhan: Glad to hear you like the fly. I could have removed it, but why? It’s not obtrusive and it’s part of the environment. And it didn’t fly in circles around the mic, which would have necessitated its removal.

Yes, I definitely use headphones. I have a few pairs I use for both critical listening and field recording. Thanks! Nice work.

Wow. What a grand Mahlerian symphony of wind and birdsong, with the wind a crescendo and diminuendo of basses and tympani. (The quiet bird soundscapes I’ve listened to are mostly soprano choruses.) Yet, the humble red-breasted nuthatch fearlessly blows his little tin horn somewhere there stage left and easily heard. There must be twenty- four or more bird species singing. One of the best of your collection of location sound fields I’ve played on this site.

Would it be possible to put a changing slide show or video clips of these fabulous places featured in your recordings? N.L.

Sorry, my Gravatar seems to have departed.

Norman: Glad you like it, and maybe Mahler would of liked it as well, but only if he listened with headphones (ha!). Red-breasted Nuthatch? Near the beginning?

wish I had great video of all these places, but in many instances (especially for older recordings), I didn’t even take photos. that’ why I grabbed a photo from shutterstock for this post (and it’s right on .. a great pic of the area surrounding Clingman’s Dome) where I made the recording, and a cloudy day to boot).

“Who has seen the wind?” I could certainly visualize myself sitting there, birds all around, trees “bowing down their heads” above me!

I remember enjoying being there, and becoming immersed in my listening, although I was certainly a little distracted by my concern that the wind was going to buffet the mic (which it did at times).

I found it very interesting – I am often alarmed by wind, and I kept startling as the wind rose in this recording! The buzzing fly made my look around my bedroom ! And the warblers, sigh, just made me think of May. Thanks

So, maybe it’s not all relaxing, but it’s definitely “immersive”. I could remove the fly (bee?), but I rather like him. At least he didn’t buzz the mic, fly in circles around it, which produces a very annoying and disorienting sound. I believe he (she?) was just exploring the understory in search of whatever, and never really noticed the mic.

Ooh, another magic one! The wind blew my heart wide open and a tiny, brown feathered troglodyte fluttered in. Thank you.

Who would not love the Winter Wren … Troglodytes troglodytes … named (I think) for its habitat of exploring darkened nooks and crannies around fallen trees.

PS as others have mentioned, I liked the fly, made me giggle

I look forward to receiving these in my inbox. I like the relaxing interlude they provide from my schedule. Thank you!

Click here to find out how.
wpDiscuz
30
0
Would love your thoughts, please comment.x
()
x
| Reply