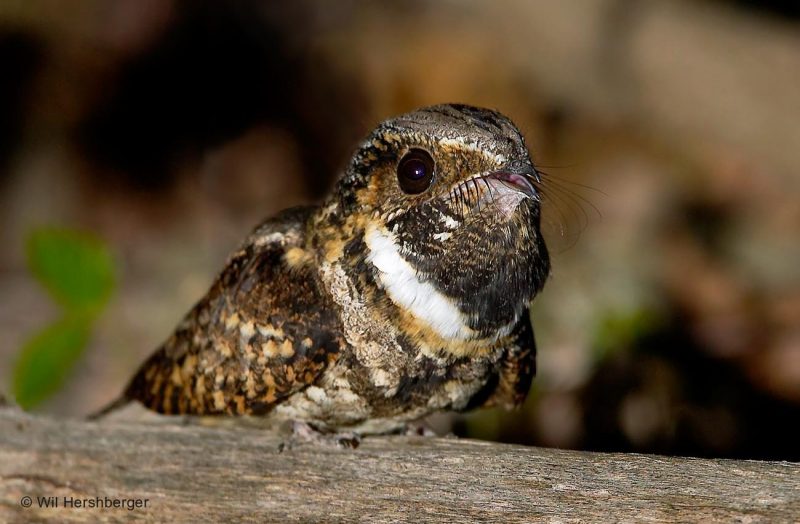 Whip-poor-wills and Yellow-breasted Chat singing at the break of dawn at Land Between the Lakes, Kentucky. 4:15am, 30 May 2016. © Lang Elliott. Please play at a low volume to simulate a natural listening experience.

During my recent recording expedition, I spent the night camping at Land Between the Lakes, Kentucky. I had no particular goal in mind other than re-visiting several locations where I’ve recorded in the past in hopes of finding something interesting.

I camped next to a swampy area, recorded a soundscape at dusk, and then retired for the night. Surprisingly (for me), there were no owl or coyote visitations to interrupt my slumber, so I slept soundly for nearly six hours … a record for me during field season. I rose promptly at 4am in the morning, jumped into my car, and headed for a favorite spot around ten miles away. I had only driven a mile or two when I suddenly came upon a Whip-poor-will, its eyes shining red in the middle of the dirt road. He flew as I got out of the car, but soon began singing from the surrounding forest. I grabbed my gear and walked in his direction.

Soon another Whip-poor-will joined in the chorus, and, to my complete surprise, a Yellow-breasted Chat began sounding off from an brushy clearing next to the road. I set up my mic and hit record. What followed was quite engaging, a veritable “whip-poor-will-a-thon” accented by the periodic song phrases of the chat. Meditative? NOT! But interesting for sure. Right?

I have a mixed relationship with whip-poor-wills. On the one hand I think they are one of the coolest birds ever, with a magical sound that enlivens the forest like no other. But they can also get on my nerves because they never seem to shut up. I remember one night in the Kentucky woods long ago when a whip-poor-will pounded me so hard that I scarcely got an ounce of sleep. Nonetheless, I’ve decided to feature this recording to celebrate their amazing performance. I sure wish they occurred where I live in upstate New York … or at least I think that would be a good thing, but not if they drown out the Barred Owls and completely dominate the nighttime soundscape.

Just for fun, here is another Whip-poor-will soundscape that I recorded over twenty years ago at Land Between the Lakes. This one also features Whip-poor-wills, along with the the ringing peeps of Spring Peepers, the gentle chirps of Spring Field Crickets, the throaty croaks of a Great Blue Heron, and the huffing snorts of a White-tailed Deer. Quite an interesting mix, don’t you think? 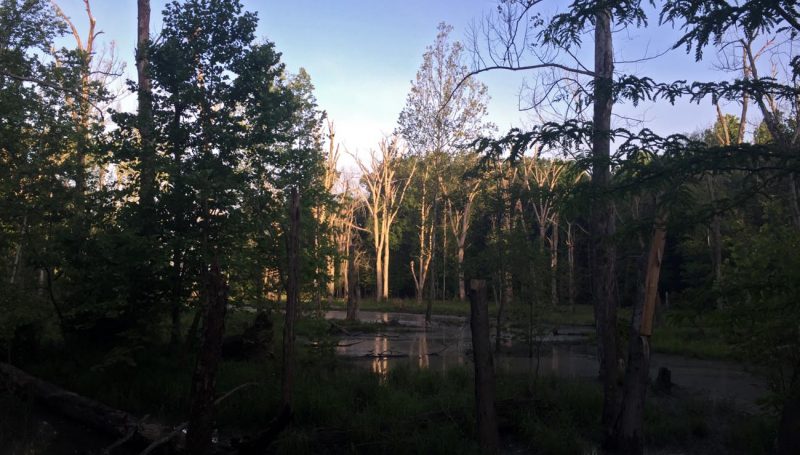 Let me know what you think of these engaging Whip-poor-will recordings!

Old thread, I know, but memory says that when I was a boy in the ’60’s there were whip-poor-wills around Trout Lake near Edwards, NY. I haven’t been back there for at least a decade, and it’s much longer since I was there at night. Suspect they are gone now. 🙁

Lang, I am enjoying your recording of whip-poor-wills and their forest friends so much. I am used to hearing only one whip at a time vocalizing in the woods near my home, but the other night I heard two overlapping calls for the first time. As a result of researching this event I found your recordings. Thank you so much. I recently camped in the Land Between the Lakes but wasn’t treated to the concert that you captured. Thank you so much for sharing. Brenda

What an absolutely engaging recording! I love this! I love the overlapping, rhythmic texture of the Whip-poor-wills. And that Chat! They always make me laugh, but this one is providing a very nice – if totally unexpected and comical – counterpoint!

I run two nightjar routes back-to-back and every year there are chats everywhere, and occasionally both cuckoos. One stop had a screaming bobcat the first year. Love the night life!

Sure wish I’d run into a screaming bobcat!

I was very surprised and pleased. Of course, now I expect it every time and haven’t heard one since. 🙁

You sure this isn’t computer-generated music 😉 I know I have Whip-poor-wills near me but have never heard them. Thanks for this.

OK, time to tell the truth … it is indeed computer-generated, as are all my recordings.

I miss hearing the Whip-poor-will. They used to be in my area while I was growing up. Thanks for the sounds.

Love them both! Thank you.

52 years ago this month I honeymoon in an uninsulated log cabin in northern Wisconsin. The whip-poor-wills joined us every night to sing on the ridgeline. I felt like we were in a sound chamber –absolutely awesome! You brought back a wonderful memory. Thank you Lang.

Love both recordings Lang. They sound so very urgent in your more recent one. Is it just the males calling? Or do females do this call too? I cannot find this answer. Sadly, We do not hear them very often here at our place in east TN anymore. Only one this spring. We used to have both whip poor wills and chuck wills widows. In south Texas this May we both watched the bullbats ( nighthawks) at dusk as they soared and darted high above and heard the weird booming roaring sound they make when diving. Suddenly the name bullbat… Read more »

Lynn: Only the males sing, according to the Birds of North America monograph for the species. Numbers have been slowly decreasing with disappearance from many area related to changes in habitat … disappearance of forest clearings or situations where the understory is grazed, thereby reducing cover for nesting (they are ground nesters). Numbers are still high in many areas, so the species certainly isn’t on the endangered list.

Do you understand Spanish

No, but I’ve been using google to translate your comments. It does a fair job, but often doesn’t quite get it right.

at our cabin in the woods we can set the clock when these fellas start their nightly singing. love the othet sounds with the whip-poor-wills!

Mark: do you commonly have several singing at once, like in my featured recording?

This is a bonus day, 2 for 1 soundscapes! the current one got on my nerves, the one from 1995 is great, a keeper. That weird sound is a white-tailed deer! Cool!

Susanne: I agree … the second recording is greatly preferred for listening pleasure. The first one, although quite frenetic at times, is definitely interesting and instructive.

I listen to every post. It is a time for me to feel like I am outdoors – instead of cooped up inside during our Phoenix summer. Love every one of your recordings!

Mary: I’d love to be out your way in July, when the monsoon rains begin and the frogs go wild and crazy. Not this summer … but maybe next I’ll do a long road trip.

I’m so delighted that i can hear your soundscape recordings on my IPad again.

Never heard a whip-poor-will or a Yellow-breasted Chat before. I enjoyed both recordings. Thank you Lang.

Where’s the conductor, the band has gone mad! I wonder if Edward Gorey, modern dance and rap found creative influence in natural music like this rather frenzied jumble of mixed parts. Those brief hushed moments where all seemingly catch a split-second breath; phew! In all, an entertaining, enriching aural experience. Is it okay to giggle?!

Okay to giggle! I can hardly take five minutes listening over speakers. When you’re actually out there, the frenzy of sound is a bit easier to take.

I miss that sound. They are gone where I live. I don’t remember them sounding that frenetic, though. They sound ‘sweeter’ in the second recording. There are some other interesting sounds in the first (newer) recording, besides the whip-poor-will and the chat. What is that in the background around 2:22? and at 5:08-5:09? This is awesome, love it! Great photo too, I don’t think I’ve ever actually seen a live one, much less that close.

Terry: Things often get frenetic when several join-in together. The throaty sounds you’re noticing are calls of the whip-poor-will.

this is so wonderful. i have not heard them in years. when i was young, there were some in the woods at my mom’s lake. i loved listening to them at night–to me it was so magic to have a birds singing in the dark, like company.

Totally cool! And the chat adds an element of weirdness to the vocal smorgasbord. I can totally see how these birds could not only keep you awake (the WPWs, I mean), but give you vertigo in the process. Your stuff is the best!

“vocal smorgasbord” …. I like that. Thanks Catherine and I hope you’ve recovered from the vertigo.

I just noticed the whiskers! Apparently it is not entirely clear what purpose they serve, but this page suggests they may either help funnel food into the mouth or protect the eyes. There’s a lot of interesting info on this page — from how they drink water to their place in folklore. https://www.beautyofbirds.com/whippoorwills.html

Pat: thanks for providing the link to more information!

Oh, the incessant call of the whip-poor-will:
Sane men have leapt from attic windows;
Good watch dogs have gone deaf mute;
The children weep till dawn.

you nailed it! lovely insanity.

Yes, indeed. Norm nailed it. Even though they are becoming rare around here, I’m still very glad not to have one under my windowsill. I’ve found them impossible to ignore when trying to sleep.

Both soundscapes are amazing. I love the chats mixed in with the recent recording and all of the other whip vocalizations. I find the recordings engaging and lively.

Glad you like them Wil … and thanks so much for letting me use your superb photo of a Whip-poo-will!

Click here to find out how.
wpDiscuz
41
0
Would love your thoughts, please comment.x
()
x
| Reply