Where Did Spring Go? 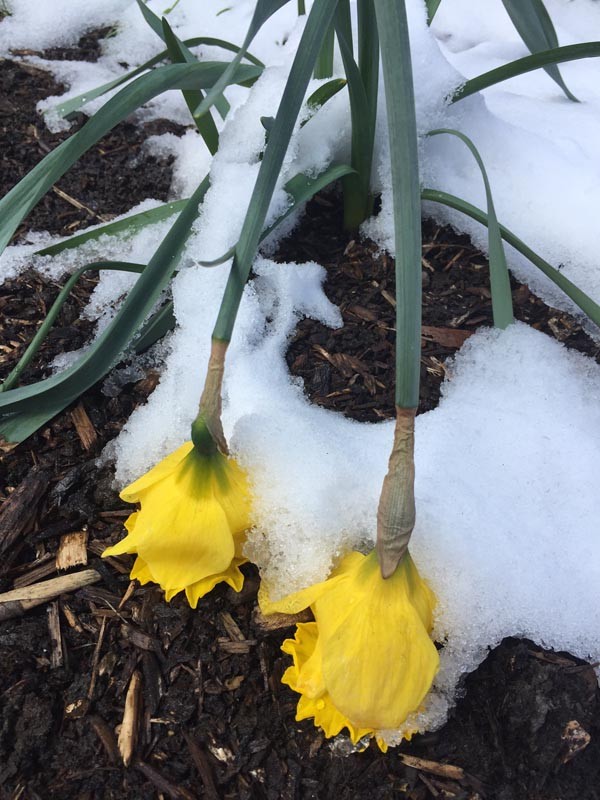 Winter has returned in spades! There’s about four inches of snow on the ground and last night the temperature dropped to 10F. It feels like mid-January here in upstate New York, and it’s hard to believe that it was in the 60s no more than a week ago, with spring singing hallelujah.

This cold spell is a real setback as far as spring is concerned … the blooms of red maples are frozen and wilted and the daffodils are drooping with heads in the snow. And the poor, poor robins. They’re still out looking for worms, but what worm of right mind would be anywhere near the surface of the soil? I have faith that the robins will make it through this rough spell just fine, but perhaps not so for certain other birds.

With winter temporarily back in the driver’s seat, I decided to spend this morning indoors, preparing something nice for my friends (you guys!). So I busied myself editing video footage that I gathered during last week’s warmish spell, at the nearby Cornell Plantations Arboretum (a lovely landscaped area just east of campus, with lots of trees, ponds, and hills). The arboretum is bird magnet for sure. As you can see from my video, I snagged some pretty nice footage:

My favorite clips include:

Please enjoy the birds and think of me, huddled in front of my computer on this frigid winter day … actually, it seems to be warming up a bit outside … I think I’ll go for a walk!

NEWS FLASH: My friend and bird photographer Marie Read braved the frigid weather and photographed at the Plantations Arboretum this very morning. She just sent me this absolutely wonderful photo of a Red-winged Blackbird singing from a frosted perch! He sure doesn’t seem any worse off for the weather, does he? 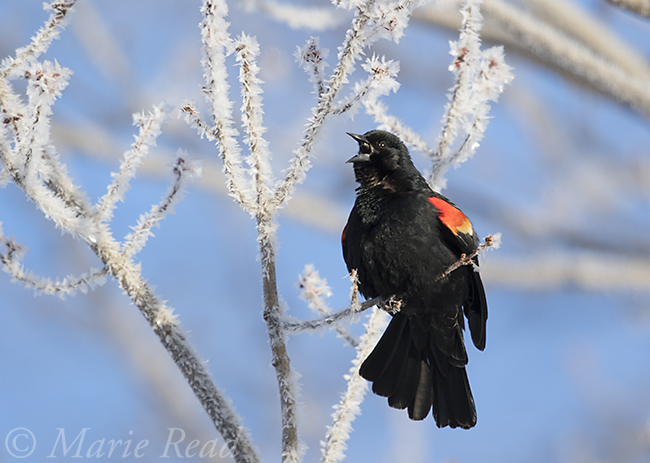 Please thank your friend, Marie, for letting you share her photo of the Red-winged Blackbird with us.

Hi Lang, I think I saw you at the plantations, I was there photographing the cedar waxwings. I should have said hello! Beautiful footage.

yep, that was probably me … although I don’t remember seeing anyone else walking around with a big lens.

What. A. Feast. For the eyes and heart! Thank you so much for these stunning clips of our ordinary friends in their extraordinary richness, beauty and over-brimming life. I think my favorite is the plump ruffled Song Sparrow with her feet clasping two branches making a ‘V’ while she calmly offers up her exuberant song (that I love and always associate with the height of summer). But your much appreciated sensibility also caught the Mourning Doves perched on a most fitting weather-worn board with their feathers scalloping like a decorative roof of tiles. Food for the soul!! Thank you, Lang.… Read more »

Susan: You’re very welcome. I certainly enjoy celebrating the ordinary, which proves to be far from ordinary when one takes a close look.

Happy to see confirmation that birds nosh tree blossoms, as those on my weeping cherry are high on the diet of local finches, sparrows (SE PA), and I’ve never known what they enjoy there–have guessed bugs (none in evidence), or nectar, until a wildlife resource assured me the flowers are nutritious. And why not?! My bunnies adore nothing so much as their dandelion blossoms! Who is the brown and white stripey sparrow-like singer is at 3.06 et seq.?

Excellent video. Envy your leafless trees, ours have leafed out making the birds difficult to see

Carole: Where are you located?

Spring is so fickle! In central Ohio we have Red Winged Blackbirds, Grackles, and the usual breeders at our feeders along with Juncos who are still hanging around. Thank you for sharing your passion!

Oh! In our spring house cleaning I discovered a CD of your frog and toad calls! Awesome. I guess words don’t fail after all 🙂

You absolutely made my day! I love your videos and can see and hear close up what thrills my heart! You are such a blessing to me! Thank you for doing what you do!

It’s in Texas! Come when you can.

I sorely wish I could up and go, but not this year (still recovering from throat cancer therapy). But next year is a different matter. I’m already dreaming about it. Wildflowers in the Smoky Mtns and TX Hill Country are on the destination list. And I’d love to go to Lost Maples to hear the Barking Frogs cry out at night from the limestone ledges.

Yes, I highly recommend the Texas Hill Country….I’m from Austin. The air is so pure there, it’s a natural bird sanctuary for birds of many different species all over the world which flock to that place. Enjoy!

Thanks for this video, which brings spring right into my house! It’s been cold and snowy in NE Ohio as well, and we even had thundersnow on Saturday. I saw Phoebes on and just above the snowy ground with the Juncos on Sunday morning.

Lisa: I sorely wish I’d managed to get down to the Smoky Mtns for spring wildflowers. A friend just told me that the bloom has already peaked at mid-altitudes, very early due to unseasonably warm weather. Oh well, maybe next year. I need to make more money, buy a really nice camper van, and then travel all over the place to record and gather video. Forever the itinerant nature recordist and videographer!

That sounds like a great idea! I seriously hope you get to do it! Just be sure to tell us all about it and share your videos and photos so we can join in the travel fun!

Sincere apologies offered here. Two weeks ago I moved from Maine back to Massachusetts and just before I left Maine, I changed out my snow tires. I knew it was a bad move then, but I ignored the nagging feeling and changed them out anyway. Such a move mid-March is guaranteed to bring on a snowstorm. 🙁

ah … I wondered who was responsible, and now I know for sure!

Beautiful, Lang! The bombycilla cedrorum always takes my breath away. And thanks for including that fine portrait by Marie too. Glad you had all this footage already for the month; it was so cold I played the Vivaldi Four Seasons Winter concerto today!

Marilyn: Looks like cold weather for the next ten days or so, at least cold enough to keep the amphibians from doing much of anything. I hope to go watch (and hear) Woodcock displaying before the week is out. And maybe also locate a good drumming log for a Ruffed Grouse. Good cold fun!

Great videos! It’s amazing to watch birds body shake as they put all their effort into their calls or songs!

Don: They certainly do put a lot into it, reflecting the importance of singing in the life of birds.

Nice footage of these beautiful birds Lang! Have you caught any of the American Pipits that dropped out of their migration path to pay us a visit? They seem to be everywhere right now.

I haven’t found any pipits yet, so I guess I need to get out there and look for ’em!

This frigid sunny morning there were quite a few pipits foraging along the edge of the lake (Cayuga) at Stewart Park. I love the way they bob. I wonder if the movement helps scare insect prey into moving. And they have those white tail feathers like juncos, whose tail flicking makes me think they are trying to scare up dinner.

Ruth: EVERYONE seems to be seeing PIPITS, except ME … guess I’d better get me arse to the right spot! And, yes I do believe their mobbing behavior scares prey into moving, or at least “why the heck not?”.

lovely! I do believe this answers my question about who I saw around the pond this morning. I thought they were Easter Phoebes, but they didn’t say “phee bee” so I wasn’t sure. They were darting over the pond, dipping close to its surface to catch bugs.
The Cedar Waxwing is beautiful! I love the superhero mask.
Thanks, Lang!

Leni: Could have been phoebes … they don’t sing all the time, especially if they’re hungry. And they certainly are “flycatchers”. How many were there?

Click here to find out how.
wpDiscuz
34
0
Would love your thoughts, please comment.x
()
x
| Reply