Veery Singing in the Rain 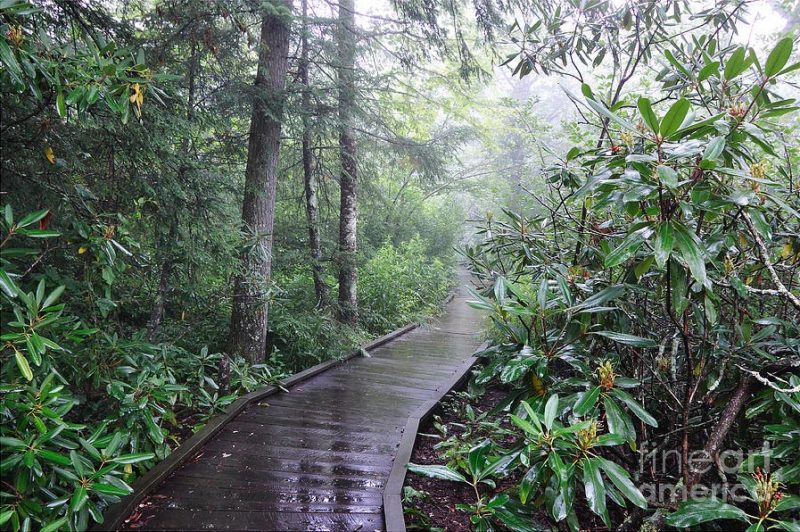 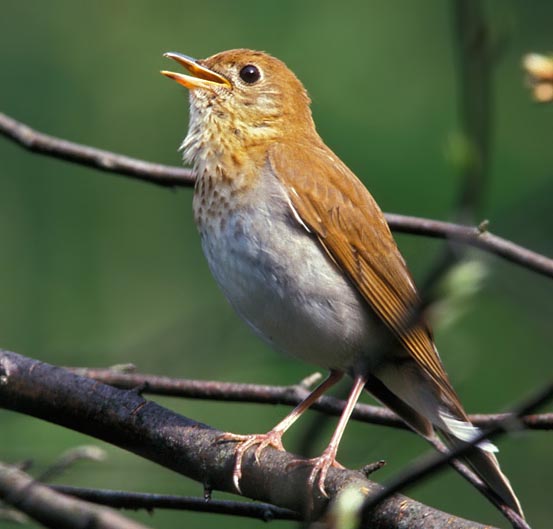 Having posted an intimate recording of a Veery about a week ago (Very Veery), I found myself thinking about all the other Veery recordings I’ve made through the years … and which one is my favorite. It took but an instant for me to arrive at a conclusion.

In the spring of the year 2000, I went on a recording expedition devoted to gathering dawn choruses. For the most part it was a flop. Storm systems followed me wherever I went and made it nearly impossible for me to get the pristine choruses I desired.

Having been frustrated by incessant rain and wind in the Smoky Mountains area, I decided to head home. Driving north into Virginia, I took a detour into the mountains to visit Cranberry Glades Botanical Area near Marlinton, West Virginia. What a wonderful spot … a flat, swampy area nestled high among the mountains, with a long boardwalk that loops through a glade.

Arriving early in the morning of May 20, I was delighted that the rain had stopped, so I grabbed my soundscape microphone and headed down the trail. Soon I was on the boardwalk enjoying the natural beauty, but there was a paucity of bird song. “Oh well … what did you expect?” I thought, and continued along the loop, soon heading back toward my car. And that is when I heard the ventriloquial singer, sounding off from a thick patch of rhododendrons not far off the trail. I quickly set up my gear and hit record. Simultaneously, it began raining again. “Oh no!” was my initial response, but fortunately I was sheltered under a large hemlock and soon found myself entranced by the sound coming through my headphones.

What a nice mix! A true “zen” recording … the raindrops hitting the rhododenron leaves all around and the Veery gently singing and calling from the thicket. It seems a perfect balance of two primary sound elements (raindrop and Veery), augmented by the the weak songs of a distant warbler (anyone recognize it?). At the end, a Blue-headed Vireo joins in.

I consider this is one of my most pleasurable “species-portrait” soundscapes, and it is significant that it materialized when I least expected it. The moral of the story for me? … “Lang, never ever leave your soundscape mic behind, even when you think there is little chance of obtaining a nice recording!”.

NOTE: The wonderful photo of the boardwalk at Cranberry Glades Botanical Area was graciously provided by nature photographer Thomas R. Fletcher. The Veery featured in my recording was likely somewhere very near to where Thomas took his photo.

This is so beautiful. Thank you so much for this gift!

I could listen to this for hours. So soothing and peaceful. Cranberry Glade is an amazing ecosystem with magic at every turn, for sure. Thanks for sharing this.

This is one that I listen to over and over … I just set it to loop and then go about my business here in the studio.

I have been wondering whose song this was! I heard this bird many times over the years, at my home
in upstate New York, and always wondered whose voice it was, but unfortunately I have not heard
it during the last two summers, and I have wondered why.
Thank you so much for all your beautiful work, and helping me to understand the many songs and
voices I hear in my area.

Something very interesting happened today as I was listening to the Veery singing in the rain. All my windows & doors are open to my courtyard & I believe that this lovely gray bird (I have seen here before) heard the singing & tried to sing back to the other birds in your recording. It was the cutest, most precious thing 🙂 I would like to know the name of this bird that is mostly dark gray w/ black wings & tail. Lang, would you know the name of such a bird? His normal voice is loud & almost like… Read more »

This is truly my kind of heaven!!

i love it. the rain has such a luscious soft soothing sound and the veery is of course magic. one of my favorites.

Never say ‘never’, Lang — just be sure to remember your own pack and carry advice. This is splendid, and the veery sounds so thoughtful, the placement and duration of his pauses, almost as if he’s thinking ahead, what to say next. Good public speaking advice!

I shall remember! Tonight I’ll be camping in Shindagin Hollow next to a beaver pond. Maybe an owl visitation?

I just discovered your newsletter, and your recordings bring me joy every day. Thanks!!

Absolutely love the mix of rain and the Veery. This is definitely one of my favorites.

I must admit … it really is a good one. Just wish I had gotten a longer recording. Back then, I was impatient when it came to such things, not realizing I would gravitate later to these kinds of soundscapes. Maybe if I went back there, one of his progeny would treat me to an extended version (Ha, that would never happen in a million years).

Love it! How about you match it with some video of you swinging around the hemlock tree like Gene Kelly? One thing I know that some of your fans may not know is how well you sing. Not sure about the dancing, but if anyone can do it, my fine friend, you can! I’ll loan you the umbrella and the fedora.

Thanks Ed. Given the condition of my voice over nine months after the radiation treatment, I wonder if my singing voice will ever come back. My hope is more modest … for my voice to recover enough to be able to narrate podcasts and like projects with confidence. I can speak pretty good even now, but things are far from normal. I have become a bit of a croaking frog, and I’m even considering joining in their choruses.

The veery’s call reminds me of a group of marbles rolling down a spiral metal tube. This is a beautiful recording!

“rolling down a spiral metal tube” … I rather like that!

Click here to find out how.
wpDiscuz
19
0
Would love your thoughts, please comment.x
()
x
| Reply