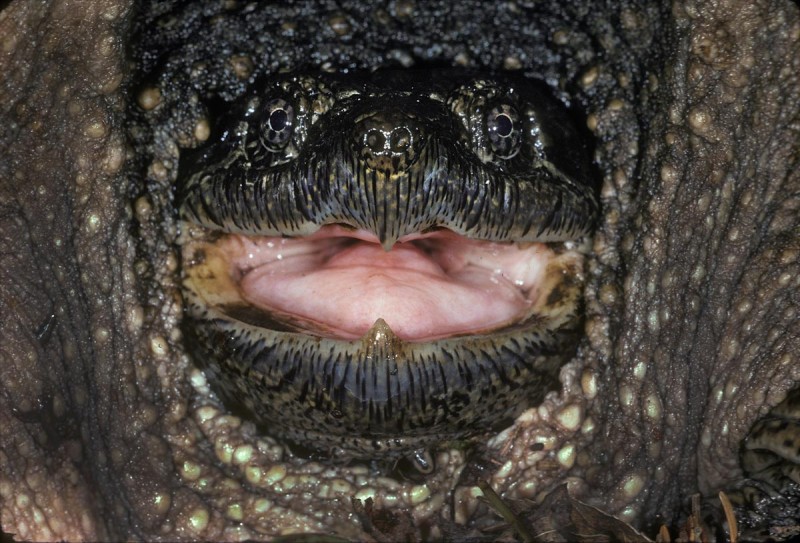 Every now and then I come across a sound event so bizarre and unusual that I can’t believe my ears. Such was the case in late July of 2005. My friend Josh, a Snapping Turtle expert, telephoned me and said he had caught a “singing male” and wondered if I wanted to record him. I was interested, of course, even though I figured Josh might be pulling my leg.

Several days later, I took my gear to a spring-fed pond on private property not far from Pine Valley, here in upstate New York. A male Snapping Turtle (Chelydra serpentina) was in a large wire-mesh cage that was mostly submerged at the end of a wooden dock. Two female snappers in an adjoining cage were keeping him company. I set my soundscape mike on the dock, pointing it toward the top of his cage, which stuck up slightly above the water. I then unraveled about two-hundred feet of cable and sat on the nearby lawn and waited, listening patiently through my headphones:

Expressive squeals of a Snapping Turtle in a partially submerged wire-mesh cage, given while surfacing during the day. 25 July 2005. Recorded at a mountain lake near Pine Valley, New York. © Lang Elliott.

Within about fifteen minutes, I heard a few gurgles and the sound of dripping water. While I didn’t have a good view of the cage, I suspected that the turtle had swum up and poked his head above the surface. I turned on my recorder. Then I heard a hissy, airy sound, accompanied by a whistling squeak (his inhalation?). What followed was truly a surprise … a series of husky, wavering squeals that were notably expressive. I remember thinking: “OMG, Josh wasn’t kidding, this snapping turtle really can sing!”

This is totally outrageous, don’t you agree? But what on earth is going on here? To my knowledge, no biologist has ever observed and described a Snapping Turtle vocalizing. Is this an anomaly? Perhaps the old patriarch has something caught in his throat (like a fishing lure)? Or perhaps he wailing in distress at being cooped-up in a cage? Or maybe his squeals have something to do with mating, or else “wanting” to mate? Are there any turtle experts out there? If so, then what’s your take on this?

My friend Josh thinks it’s the male turtle’s “song” (as opposed to a distress call) although he admits that he’s not at all sure what it means. Do females respond to these forlorn squeals? Or is he aiming his song at us gullible humans? In other words, is this danged turtle trying to mess with our minds?

Maybe the following Youtube video of tortoises mating will shed some light on things. These are not Snapping Turtles by any means, but there are similarities in the sounds, don’t you think?:

You may wonder what happened to the singing turtle. It turns out that Josh donated it to Lowry Park Zoo in Tampa Florida, where there is a display with a push-button that plays my recording:

NEWS FLASH: I just discovered the following interesting study of the underwater vocalizations of an aquatic long-necked turtle : Voice of the Turtle … In this study, reference is made to numerous other studies of sounds emitted during breeding activities, such as “long sequences of whimpers and wailings emitted by Hermann’s Tortoises”. But there’s no mention of the Snapping Turtle. Still, it verifies the prevalence of turtle vocalizations and points to the need for further studies

Before closing, I want you to hear what a REAL singing turtle sounds like (ha!):

A NOTE FROM LANG: This blog post was originally published in 2011 on one of my discontinued websites. Yesterday, a friend asked me about the recording, so I decided to republish the post here, with several edits to the story line.

Tortoise Making Croaking Noise? Here Is The Reasons Why

Turtle Sounds Explained (What Noises Does a Turtle Make?)

What Sound Does a Turtle Make | Turtle Sound

[…] There are even some turtles that can sing a song. The most famous example of a singer turtle is probably the snapping turtle at Lowry Park Zoo. […]

Thank you so much for this page. I have a pond in my backyard and for five days straight there was a snapping turtle, sitting in the same general area, singing like this. I was worried there was something wrong. I know there are at least two other snapping turtles in the pond, but they seem to just be ignoring him. Beautiful song, but so sad.

Abigail: It’s great that you were able to hear a snapper actually making these kinds of sounds. So very few have shared that unusual experience.

My male snapping turtle sings all the time. He’s always got his head and neck stretched out nose above the water when he does it.

We released him in a pond near our home after a few weeks and , sadly, never saw him again

Thank you so much for this. Decades ago we had a hatchling snapping turtle in a very large tank and when I came into the room it would make a high pitched sound. I have always been curious about it. S. P.

Love that you shared this with us! Makes my day all the in resale sound and visuals you capture!!!

This is incredible!! We’ve had a snapping turtle in our little garden pond, but never thought to listen for a song! Great audio capture!!

thank you for this fine aria of nature’s music – we love it!

i know why the caged turtle sings… “Get me outta this cage, Now!”

I picked up a small snapper, he was trapped by a chain link fence and i wanted to put him near a creek. it smelled awful and jerked around so strong, he broke free from my hands and hissed and snapped!the necks juts way out.

thank for your posts. this is amazing. Love them!

The typical distress response of a snapper would be hissing, which is probably not vocal (not produced by vocal chords). Truthfully, I am not at all certain as to why this male was making these wailing squeals. If it were a human, I would say distress. But snapping turtles are a long ways from being human. For them, this could be music to their ears. Or not!

Do turtles have vocal chords, u kno? We have snappers near us. I think they come out of the water to lay eggs. And they always have their big, ugly mouth open. And will hiss if desturbed. And man, are they Ug-ly! Lol.

I see it the same way as you, with the cages. But anyway: this is good work. I trust on Lang Elliott’s responsibility and that he knows how to treat them right. It looks so. Greetings! anet

Note that he wasn’t “my” captive turtle, but rather Josh’s. I was just given the opportunity to record his sounds. As I mention in the post, Josh ended up donating the male to Lowry Park Zoo in Tampa, Florida, where he is living happily I assume, with lots of natural habitat at his disposal. At the zoo, there is a push-button display where people can play my recording. I doubt if visitors ever get a chance to actually see the turtle because snappers rarely surface.

Wow…. We have common snappers here on the pond, but the only vocalization I have heard is when they feel threatened out of water and they hiss. I feel very sad hearing this knowing this animal will be killed as I don’t eat animals …

I have tortoises. Turtles and tortoises are not mute, as many people presume. They make all sorts of sounds, and the males are very vocal especially towards females.

hmmmm … ever heard them squeal or wail like this snapper?

Just amazing! Never heard of this phenomenon before. Nice to hear a reptile vocalizing which certainly you don’t hear too much. I am wondering how well turtles can hear. Do you happen to know Lang?

Chris: No, I don’t know anything about their hearing, although I know their eyesight is darned good. What I’ve never been able to figure out is why Painted Turtles are so spooky, leaping off their sunning logs at the slightest disturbance. Everywhere they are skittish. Is it because people shoot at them?

Being caged when you heard him…….perhaps he was whaling to be free??

Hello,
I wonder why was the turtle caged???

The sounds are haunting and sad….

The guy that put me on to it was a retired turtle expert. It’s certainly possible that he is “crying” for freedom, but then again our tendency as humans is to react to the sound from a human perspective, identifying with “what would a human feel like who is making that sound.” In the turtle world, what sounds sad and mournful to us might not be sad at all (eg. beavers do a lot of moaning around their dens; I don’t believe because they are unhappy). There’s no way of knowing without careful observations and studies, especially in the wild… Read more »

Off topic slightly, but the great writer and literary critic Edmund Wilson’s short story, The Man Who Shot Snapping Turtles, comes to mind. (Memoirs of Hecate County) And the story is situated in upstate New York, of all places. On topic: totally fascinating post. I was not aware turtles and tortoises vocalized. We all should know. Thank you.

Wendy: I just found out that the “singing turtle” was donated to an aquarium in Florida where it is still alive and well. I’ll be modifying my post shortly to include that information.

Dr. Barry Wicklow of St. Anselm College in Manchester, NH, was, I believe, the first to record the song of the turtle some years back. I don’t believe it was a snapper. This occurred in a lab. I’ll send a link of your page to him.

Pat: Please do. I’m unaware of his study or recording. It would be great to find someone who actually knows (or thinks he knows) what this is about.