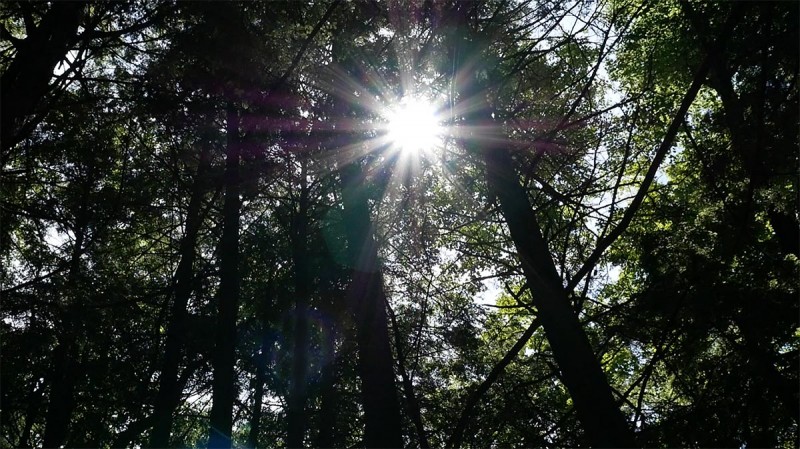 It is early summer … imagine that you are sitting next to a small, trickling brook in deep forest, celebrating the dawning of the day. Over the next ten minutes, various songbirds chime in. First, you hear the hoarse phrases of a Scarlet Tanager as it awakens to the new day. Minutes later, a Wood Thrush dominates the scene with its musical songs. Next, a Veery chimes in with calls and then hollow flutey rambles. Then a Blue Jay take the center stage with its raucous calls. And finally, a Dark-eyed Junco joins the chorus, adding its ringing trills to the orchestra. A gentle and uncluttered chorus, for sure, and one that might very well qualify as supremely “tranquil,” worthy of inclusion in a soundscape title devoted that theme.

Well … what does everyone think? Should this soundscape make the cut? When played at a lowish volume, it certainly sounds tranquil to me. And what about the trickling brook … does it add or detract? I hope it adds for most listeners, because there is no way for me to remove it.

NOTE: Listening carefully, I think I hear several Hermit Thrush songs toward the end of the recording. Also toward the end, listen for the songs of Common Yellowthroat and Ovenbird. Are there any other species I’ve missed?

It is wonderful and all the different birds are incredible. the sound of the brook is a soothing adage. Thank You for this.

Lang, this is absolutely beautiful as are all your recordings! I’ve followed you from your website to Facebook and now to your great blog. You are an inspiration. I want to get out and try to do some recording before the tourists arrive here in Western North Carolina this summer.

Tibby: Where in western NC are you? Near Asheville?

Love this one! Please do include it!! It’s amazing how the whole gang ends up joining in till the woods are a revelry of song and energy!

So soothing.. reminds me of childhood and the stream that ran through my garden..

“Are there any other species I’ve missed?”

Since you asked, American robin at 4:52 and alarm call at 11:09; Mourning Dove pipes up at 7:26; and I think I hear a few notes of the Black-throated Green Warbler at 8:06. Full disclosure: I had to use monitoring headphones to hear these details. That’s from one play through, anyway.

Great ears Norman! I hear the Robin and I also verified the Black-throated Green Warbler’s song. But I don’t hear the Mourning Dove.

I think a fade into different tracks would be great.

Dick: That’s what I think I’ll do … craft a continuous, unbroken experience, though made up of a number of different recordings in sequence. With special attention paid to how I do the sequencing, so that transitions are smooth and resonant.

Sounds perfect! Best of both worlds – different tracks, but can be played as an uninterrupted flow!

Me too – I would like different tracks to allow me to go to what I am in the mood for on occasion….

I have been playing the Robin since you posted. Now this heavenly sound. Tabs left open.

This is great. I can hardly wait ’til the collection goes on sale.

Well, I’m busy looking for additional recordings. I may create a continuous experience lasting around 75 minutes. In other words, maybe I won’t separate the tracks but rather sequence them, cross-fading one into the next. Would you prefer that? Or would you rather have separate tracks?

Oh, Lang, definitely in! Closing your eyes, the trickling brook carries you deeply into the woods, sitting on a rock beside it wishing the moment would not end. Will look forward to the collection.

awesome as usual. I think I told you that I listen to Insect Lullabies quite often.

George; Yes … Insect Lullabies is one of my favorites. Some insect choruses are quite cacophonous, not at all relaxing. So for that title, I was very careful in my choice of tracks, in my attempt to convey the soothing aspect of insect songs, especially pulsating choruses.

Beautiful! I write children’s stories, mostly outdoors. I find it relaxing and, thus, easier to get away from all the noise life brings and simply be “creative”. Alternatively, if I’m writing inside, I usually keep everything turned off. Anyhow, I found this to be a wonderful way to bring the peaceful outdoors inside. Thanks!

Derrick: Glad to hear my recording brings the peaceful outdoors inside, to help you with your writing!

My favorite birdsongs combined with a quiet brooksong!!! So perfect, Lang. I am searching for this recording on your webpage so I can purchase it. I know I’ve expressed interest in purchasing these short little recordings you produce but can never find them on your web page!!!

I look forward to hearing about how we can purchase this recording in CD and/or mp3 form!!!

Deborah: I’m in the process of creating a new title that will be called something like “Tranquil Bird Songs”. I’ll be posting potential tracks one at a time on my blog, so as to get responses and see if they pass the muster. At this point, I have pretty much cleared two tracks … “Robin Singing at Dusk” and “Trickling Brooksong”. I’ll post more candidates soon. Once I have enough tracks to create the title (= 70+ minutes total), I’ll publish it and let everyone know it’s available for digital download. I hope to have “Tranquil Bird Songs” complete within… Read more »

The brook is the warp and woof of this magic tapestry.

I share your sense, Cathy, that the brook serves as a matrix, in a way it’s the fabric upon which the birds’ songs and soliloquys are embroidered, adding colors and textures that become the story. I, too, love this one, Lang!

Great image, Cathy! Thanks for sharing it. I think the tinkling brook also grounds the recording in a way that intensifies the feeling that you are really THERE in the deep woods as the day begins to break.

Yes!!!! Thank you for this loveliness. (Now I’ll listen to the rest)

Exquisitely encouraging for a winter-bound heart. I’ve not read your commentary and am trying to ID that bird. I’m sticking my neck out. Scarlet tanager? Now I’ll head up to see what you have to say how my old brain did 🙂

I’ve been listening as I checked my email. It certainly is tranquil and pleasant. Makes a nice background while doing something.

About a month ago I lost one of my dearest friends to cancer. Two weeks later my furry rescue cat companion of 13 years died. These natural soundscapes provide such profound emotional grounding and comfort. Thank you so very much for your nature ministry!

Barbara: Sorry to hear about your losses. As you probably know, I’m recovering from a bout with throat cancer. So far so good, although the “cure” has had some pretty miserable side effects. I suppose I am a bit of a nature minister … at least in the sense of offering a refreshing drink of wildness to help sooth that which ails us. Wild nature is healing. And with the proper attitude and focus, one can touch upon wildness almost anywhere, even in the middle of a busy city.

This is one of my favorites. I love the song of small water, the building richness of the birds, the jay’s rowdy punctuation… wonderful.

Just wonderful, so looking forward to spring. Nesting Sandhill Cranes are back at Amboy Marsh Nature Sanctuary. Planning on going out this weekend .

I love your recordings — very high quality and beautiful to listen to!

What a beautiful gift you give to us on such a dreary day!! Thank you so much for bringing back so many memories of these beautiful sounds of nature especially during our camping days.

With the brook, it’s perfect! I think I hear a low bullfrog in the background a few times? This soundscape definitely DOES make the cut in my book. Wow, it is beautiful. (And there always seems to be at least one wily corvid in the bunch in case anyone listening becomes too relaxed…) I love it.

Listened to this while sitting in a hospital waiting room. I love thrush songs. That along with the trickling Brook made me temporarily forget where I was.

I guess “where we are,” is relative to where our mind is at. There is certainly nothing wrong with wandering off into nature internally, even during the most trying of times. In fact, perhaps it is a very sane thing to do.

I agree! Let’s hear it for ‘wandering inwards’ with recordings of or remembered birdsongs during trying times (or in ordinary times)…to take us to that peaceful place of the mind. There we find harmony, and perhaps the truth of who we are, although without thoughts.

Haiku master Kobayashi Issa surmised that “only the birds sing the music of heaven in this world.” I tend to agree, even if that isn’t the accepted biological function of bird song.

It’s perfect just the way it is and wonderful for your new “sublime” recording. On a day when rain is pouring from the sky and flooding everywhere, it’s deeply soothing to listen to this recording. Thank you!

I think it is absolutely lovely and the trickling of the brook really adds to the soundscape!

Click here to find out how.
wpDiscuz
47
0
Would love your thoughts, please comment.x
()
x
| Reply