I live at the south end of Cayuga Lake in upstate New York. The lake is home to a bottom-feeding fish called the White Sucker (Catostomus commersonii), a freshwater species that may reach twenty inches in length and weigh nearly six pounds. This species is called a “sucker” because of its fleshy papillose lips used to suck up invertebrates and plant matter from the bottom of lakes and streams.

In my area, suckers generally breed during the last half of April, when water temperatures reach about 55 degrees fahrenheit. Spawning adults migrate up our local streams, swimming against considerable current until they reach a waterfall or other barrier that they cannot pass. Males gather around gravid females, rubbing against her body, and then deposit sperm as she releases her eggs (which may number in the thousands).

I’ve gathered video footage for several years now, but a few days ago I got my best views in the clear water of a creek emptying into the inlet of Cayuga Lake. I used a small camcorder placed inside a waterproof case, inserting the setup into shallow water at the base of a manmade dam (at times, you can see the concrete walls on each side of the dam).

It’s difficult to imagine what it’s like to be a sucker. I don’t think it’s an easy life … many individuals have body wounds and some show diseases of the eye or nictitating membrane. Nonetheless, it is incredible to watch their movements as males gather at the base of the falls and await the arrival of receptive females. They no doubt enjoy what they’re doing, because when it comes to mating, nature employs hormones that evoke pleasurable “feeling states” to insure that the job gets done! 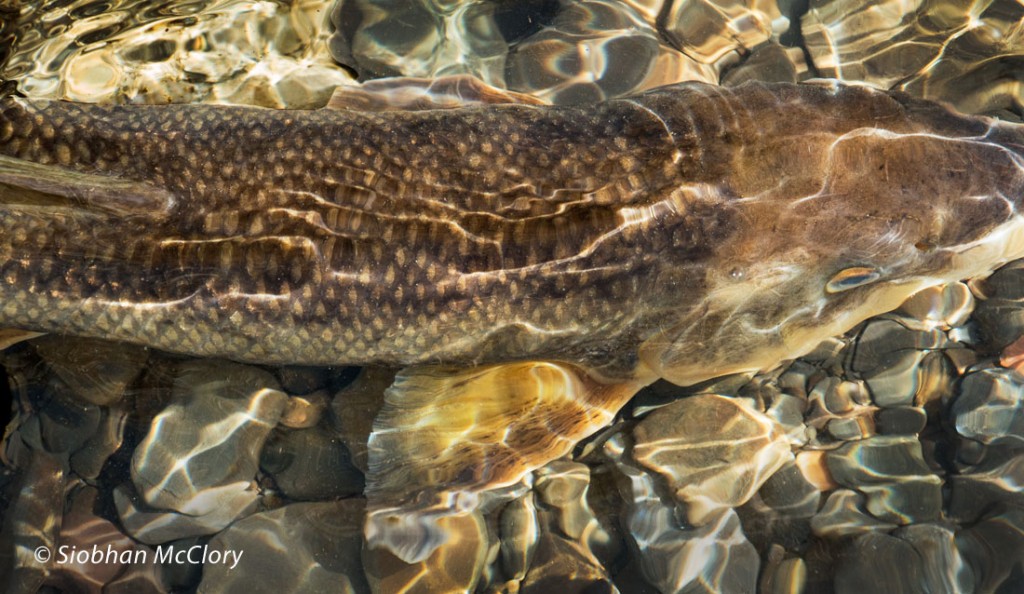 Lang, this video is awesome! My colleagues and I at UW-Madison are working with white suckers and have sampled fish during spawning runs similar to this across the western shores of Lake Michigan. It looks like there are a mixture of longnose and whites in this video and those external abnormalities you are seeing are a variety of neoplastic lesions and tumors. We have witnessed those over in Lake Michigan as well as Lake Superior and are investigating what causes them. Very cool video!

Thanks Andrew. Feel free to use the video in your work. In fact, if you want to download it, I can arrange that … just e-mail me direct at: langelliott at mac dot com.

Fabulous video! One of the most astounding and beautiful sights I’ve ever seen appeared to me one day on an April walk. I happened to glance down into a clear brook at a point where it narrowed before shooting into a pond. There were suckers there, three as I recall, nosing side by side into the current. Then the most amazing thing happened. The fish began to thrash violently—thrash but somehow manage to remain in place. As they shook (there was a whole lot o’ shakin’ goin’ on!), the eyes of the fish bulged and turn red and color flashed… Read more »

Ed: So the color change had to do with the final stage of courtship? I’ve read that one or two males might be involved, sidling up to the female and thrashing. At some point she ejects spawn and at least one male fertilizes the eggs. What did Lavett Smith have to say about this?

Great video, Lang! I find that some fisherman look down on this “lowly” bottom dweller, but when you realize what they go through to ensure the future of their species, you can’t help but respect these interesting creatures. The well-worn path from my office to the coffee shop, takes me along Cascadilla Creek. Two days ago, while taking my normal afternoon stroll to get caffeinated, I was delighted to see a handful of suckers fighting their way up the creek. Thanks for sharing.

Jason: Why yes, I know very well that well-worn path to Gimme Coffee. I have footage from Cascadilla Creek, from the upstream waterfall where they can’t go any farther. But the water is murky up there, not nearly as clean as the Coy Glen outlet where I got the footage for the video.

Thank you Lewis. I used a mid-level Canon XL-20 camcorder in a waterproof housing. The lens was set to full wide-angle and I let autofocus do its trick. The whole affair was mounted on to the end of a monopod that I inserted underwater and moved around, hoping that I’d get something good (surface reflections made it difficult to see the fish, so a lot of luck was involved).

This is great! I have some very fond sucker memories – finding them gathered in great numbers at the bottom of a big waterfall. I had no idea what they were up to, but given that it was April maybe now I do! Love the little video!

Fran: Ah … another sucker lover! I get such a kick out of their spawning here in Ithaca. I have some other footage showing males sidling up to females. When I get around to producing a Nature Vignette for the White Sucker, I’ll share the rest of my footage to round things out a bit.

Lang, this is fascinating! It’s wonderful to watch them being who they are, and I like being able to hear the water. I don’t know anything about White Suckers, so I’m glad to have the opportunity to watch them here.

Thanks Lisa. They are wonderful to watch, especially via underwater video. The ripples and reflections on the surface make them difficult to see with the naked eye, even if using polarized glasses. That’s why I’m so excited to share the footage. Its like watching them in a big aquarium, at eye level.

Click here to find out how.
wpDiscuz
12
0
Would love your thoughts, please comment.x
()
x
| Reply