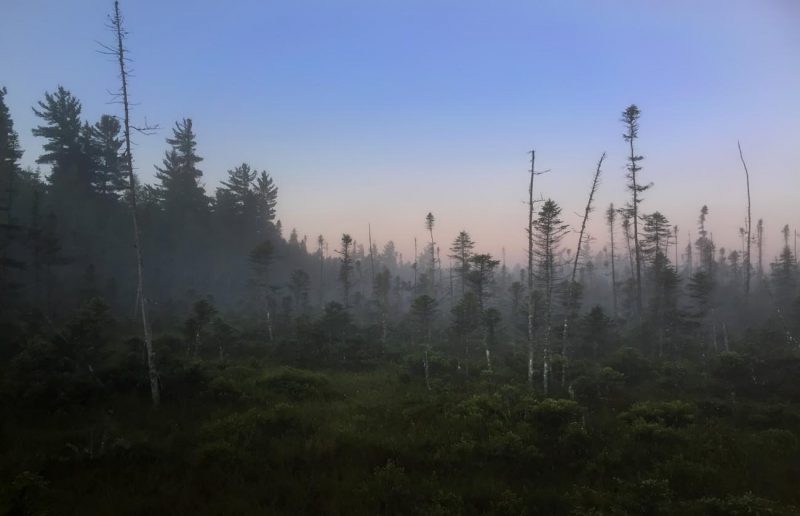 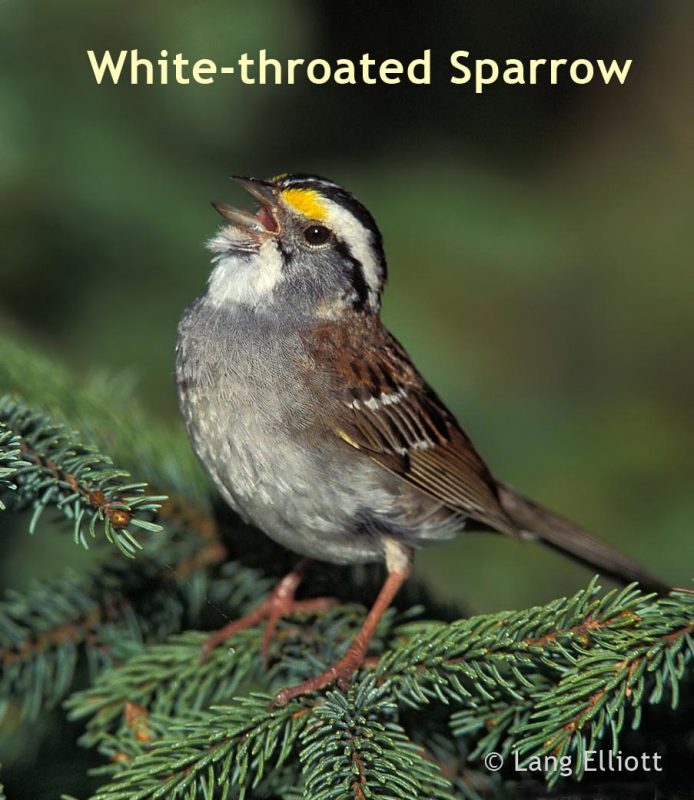 Over the Fourth of July holiday, Bob McGuire and I spent two days at Spring Pond Bog, a wonderful Nature Conservancy preserve in a remote area of the Adirondack Mountains near the village of Tupper Lake. The preserve is a whopping 4200 acres in size and includes a giant open bogland that is over a mile long. The real jewel, however (at least in terms of sound recording) is a smaller bog that is easily accessed via a boardwalk. The small bog is carpeted with lush sphagnum moss and is populated by numerous black spruce and tamarack trees, most under ten feet in height. Pitcher plants are scattered throughout, along with Bog Laurel, Leatherleaf, and Bog Cranberry. 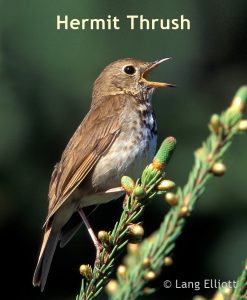 The small bog and its surroundings provide a haven for boreal birds. Hermit Thrushes nest in the forest edge. In the bog itself, White-throated Sparrows are numerous, their whistles enlivening the dawn chorus. There is almost always a resident Lincoln’s Sparrow or two, and it is not unusual to find both Palm Warbler and Yellow-bellied Flycatcher. 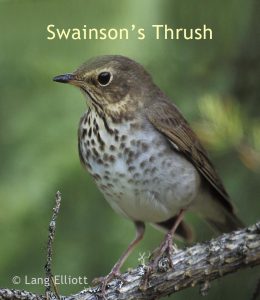 I’ve visited Spring Pond Bog on several occasions. While Bob and I managed to capture some compelling soundscapes and numerous species-closeup recordings during our weekend visit, my favorite dawn chorus soundscapes are from the year 2000, when there was a Swainson’s Thrush adding its musical song to the chorus.

The featured recording is a true-to-life representation of the amazing soundscape heard from the boardwalk at around 4:45 am in the morning. Below is another recording I made in 2000, with both species of thrush prominent, along with the repeated, staccato che-lek! calls of a Yellow-bellied Flycatcher:

What follows is a soundscape portrait of a Lincoln’s Sparrow, recorded last Sunday morning at the bog (its exuberant song has been likened to that of a House Wren, but I think it’s much prettier).

What a delightful melody, heard against a backdrop of White-throated Sparrow whistles and Hermit Thrush flute-notes … along with numerous other bird songs, including those of Nashville Warbler and Golden-crowned Kinglet (listen for super-high whistles during the last half of the recording). The Lincoln’s Sparrow’s thrilling outbursts erupt like sparkles in the bogland soundscape.

When Bob and I left on Monday morning, we came across a Winter Wren singing not far from the trail. The wren stayed put long enough for me to capture an immersive sound portrait:

Here is a photo of Spring Pond Bog taken from the boardwalk in mid-morning … what an absolutely beautiful spot, a stunning manifestation of the northern boreal ecosystem: 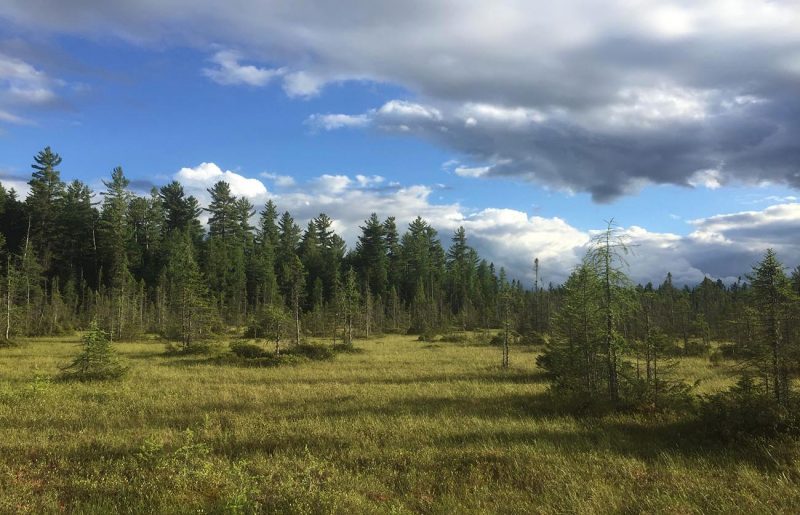 Our trip was rejuvenating and both of us experienced great pleasure in once again hearing the magical and utterly sublime bogland soundscape. I lived in the Adirondacks for a number years earlier in my life, so this was truly a reunion, and one that nurtured my mind, body and spirit, bringing back wonderful memories of times spent alone and with friends in this splendid northern setting.

I knew you’d like it Dick, especially considering that White-throateds are such a large part of the bogland soundscape.

What a sparkling texture – so high and shimmering! It’s fascinating to listen to this soundscape that is so beautiful and also so unfamiliar to me. I love listening to how all these high-pitched songs fit together. The Lincoln’s Sparrow song is gorgeous! Also, I’ve never heard White-throated Sparrows in context, and the Hermit Thrush songs fit so perfectly with them. But of course they do – Nature is a superb orchestrator!

Wondrous, all of it! Thank you so much for gathering these snippets of beauty and spirit that the birds embody. (…If spiders sang, would I like them more?) Also, I had never even heard of the Lincoln Sparrow or the Winter Wren. Now I know them quite well!

Not sure why they named it “Lincoln’s” sparrow, but the male sure has a wonderful song. I would rather it be called the Bog Sparrow, or something else descriptive of its habitat or behavior. I really hate it when “they” name a bird after a person. It’s fine with me if they put that in the scientific name, but the common name should provide information about the bird itself, and certainly not some human who may or may not have had anything to do with the bird. OK … end of rant!

Agree wholeheartedly on the naming of birds according to their appearance or habitats. Sure would make it easier for new birders to absorb all the species.

I’m finding this such a healing influence as I’m processing all the human craziness, violence, scary political stuff, etc. in this mornong’s paper. Listening to this soundscape washes my jangled synapses and cells, right down to my bones. I’m relatively new to your work, and plan on donating later, when I’m near my computer.

Suzanne: I agree. Nature soothes the spirit even during crazy times such as ours. It is important to allow the voice of nature to wash those jangled synapses and cells so that the music can sink into one’s bones, into the core of one’s being.

oh wow, i think that is the most exquisite recording yet in terms of the pure beauty of the songs in combination. ethereal. total delight.

Oh my–this one is HEAVENLY–my new favorite. Wonderful job capturing this. Thank you

With the bird song season winding down, I’m running out of new material. But I have as large backlog of recordings I can draw from in the months to come. Due to new developments (new book idea, new web project, possible insect soundscape trip in Aug., etc.), I won’t be able to post as much, but I will certainly at least pump out one a week in July and August.

Lang, oh my gosh, sparkling! After these past two days, I just want to gently curl up on a mossy bed and cry–a good cry. Timely reminder there’s magic also afoot in this world… thank you for this beauty. Much needed.

Totally stunning and one of the most amazing and sublime soundscapes in North America. I am so thankful that it hasn’t change … except for the disappearance of that single Swainson’s Thrush which was so prominent in the year 2000. That could be the result of population changes in the species. Apparently, there has been a gradual decrease of 38% in Swainson’s Thrush populations since 1966 … significant for sure and very concerning.

I’ve just spent 30 virtual minutes there lost in imagination. I can’t get over this place! That’s it, tho. I’ve got to go.

That OK … you’ll be back soon enough! I’ve been looping it for well over an hour now. : >)