Last Thursday, on the 8th of February, we had a brief warm and rainy spell. The temperature rose to about 50F during the day and then dropped into the high 40s as night unfolded. Although way too early in the season for amphibian activity here in upstate New York, I decided to visit a local natural area just in case a wayward Jefferson Salamander was on the move.

It was raining, so I left my video camera in my car. With the aid of a bright headlamp, I carefully searched the area for over an hour. As I had expected, I didn’t find any salamanders. So, around 8pm, I decided to call it quits and began walking back to my car. And that’s when I found one, a male, moving quickly across a grassy clearing. I rushed back to my car to retrieve my camera and then returned to the clearing.

Although it took me awhile, I managed to find him again and document his movements as he ambled under a grove of tall pine trees and then marched into the wooded swamp. He was moving so quickly that I had trouble keeping my camera on him, and I was quite lucky to capture the moment when he scurried over some ice and then slithered into an open pool, quickly disappearing into the leafy muck.

Well folks … this is living proof that SPRING IS HERE! There is no argument about this. One salamander on the move proves, without question, that the season of renewal has finally arrived in my neck-of-the-woods! 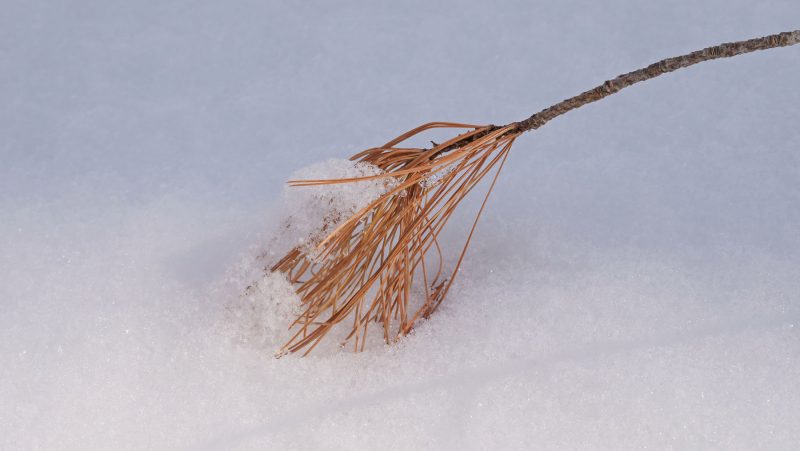 Now, just six days later, snow covers the ground again and it looks and feels like winter outside (see above photo, taken today). But I know better. And if I come to doubt my declaration of spring, all I need to do is think of the salamander, resting patiently in swamp, ready to burst into action during the next warm, rainy spell. He does not doubt that it’s spring, so why should I?

Love this so much. It helps me a lot. Lang, You are an inspiration to me life. So glad for the blog opportunity.

Love this! It helps me a lot! I love the blog opportunity, Lang! Thanks so much for doing this. You have been an inspiration to my life.

Yesterday I was out moving branches from the garden beds and I accidentally uncovered a wood frog (I’m in western MA). S/he seemed a bit stunned so I picked him/her up and moved him to a more sheltered area, then impulsively decided to pet his/her back as if to apologize for disturbing everything…well, s/he chortled a song as I rolled the back of my finger down his/her back, and lifted up as if to say “a little lower to the left, please”, as if I was giving a back rub? So I did it again and got the same result.… Read more »

Wow! This is amazing! Never had that happen before!

Holy Mackinaw Lang! That’s early, and easily beats my early record here in southern Ontario of February 24 in 2017. Thanks for the prompt. I’ll be out next reasonably warm evening. You’re probably aware of this, but fall is also a great time for salamander viewing. Last October I started to go out on warm evenings searching for them and was taken aback by what I found: scores of red-backs, lots of efts and handfuls of Jefferson and spotted salamanders. So in future years, the autumn evenings will beckon me outside as well.

Lang,were you surprised to see the larva that recoils from the salamander’s approach
already feeding in the open air?

Yes I was surprised to see a very alive larva. I think it’s a Black Cutworm, a common pest of golf course turf (my video was actually made at the edge of a golf course fairway).

Wow. Never seen that before, either.

After having 16″ of snow with temperatures down to 8 degrees in the state of Washington, with pussywillows popping out and the spring flowers coming up before the snow, this was wonderful to see.

Now that is good news to gladden the winter-weary heart! Thanks!

How beautiful. What a gift to see. Thank you, I am smiling.

This is so amazing. Thank you for sharing.

Debbie: It certainly provided a nice excuse to declare that spring is on the move! Actually, I start doing that in the autumn, when the buds of many trees and shrubs are formed. That, in my mind, is actually the beginning of spring … but most people just laugh when I say that.

In the past few weeks, Lang, we’ve had -46F straight temperature a couple times followed by a total of perhaps 20” of snow, so no spring along the Canadian border in Minnesota that I can see. Good for you and your salamanders though.
Allan

Allan: It sure doesn’t sound like spring up your way! I am grateful we had that one warm spell, but I was totally surprised to find a salamander on the move. In years past, I haven’t bothered checking during these really early rainy periods, but henceforth I will check whenever I think there’s even a tiny chance they might be on the move.