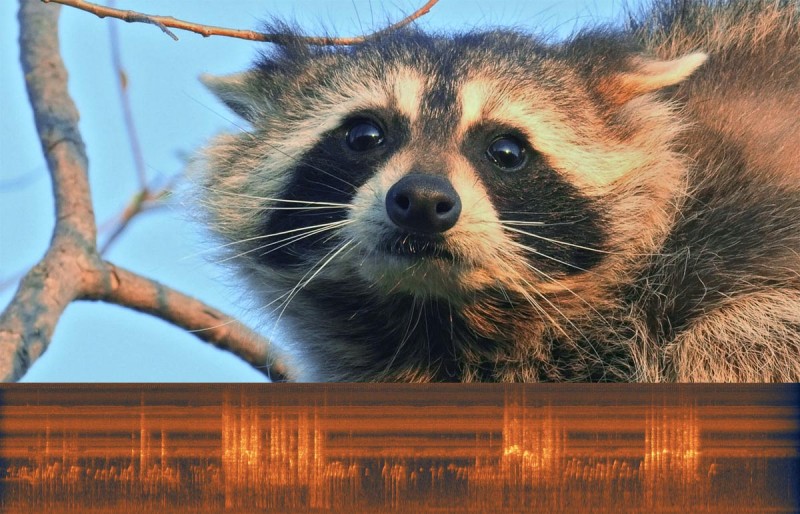 Just having published a blog post featuring a groundhog fight, I’ve decided to post a raccoon fight for comparison. This is an old recording, from September of 1990, yet it is still my best example of scuffling within a family group. Notice the whining that precedes three outbursts of loud and raucous calls. This is typical of what the mostly nocturnal raccoons do, and is usually heard in the dead of the night. In comparison, groundhogs are day-active (diurnal) and are unlikely to be heard at night.

So … if you hear a raucous outburst at night, it is most likely a raccoon fight (or else a cat fight, if there are numerous house-cats in your neighborhood).

NOTE: If you listen closely at the beginning, you may hear a screech-owl in the background, giving two melodic whinny calls. They’re faint, so listen very carefully. I was actually at this location to record the screech-owl; the raccoon scuffle happened unexpectedly, right of the blue (or rather, right out of the black), truly an amazing gift in the wee hours of the morning.

That certainly sounds like them. I’ve heard that screaming even when they are mating here in NJ.But last nigh I heard crying..Was a big racoon running all over the place just crying for 29 mins. Never heard them do that before. Any ideas? I pretty much know my yard and its personality after spending hours in it during the pandemic. But never heard this sound before. Hopefully the creature doesnt have rabies.Thanks for the sound clip! Hoping to hear..Pat in Nj. Psdumas@comcast.net

My wife and I movedt to the “country side” about 5 years ago and we have “woods” surrounding our property. I knew we had plenty of raccoon around us, but had never heard a sound from them. The other night my youngest son (35 years old) comes to his mother and I telling us of a “huge cat” he had heard. Last night he said to come out onto the porch and we could hear it. Well, thanks to what I heard, and your blog, I now know it wasn’t a “huge cat” but rather raccoons fighting… thanks sir!

just heard some outside. very cool

When I went camping at red bud in Arkansas, it was the last day we were staying the night. And out of no we’re the trash cans started making scary noises. I thought it was a Mountain lion but it wasn’t it was a raccoon. When we were going to get out of the tent we shon the flashlight on the area where the noises were coming from. A raccoon came out on his hind legs and he was so adorable, we went back to sleep. Then that very day there was a banana bread in our car and my… Read more »

Thank you. I saw two Racoons from my window after this sound woke me up. I didn’t know they fought each other, also its amazing we even have them, where I live is a small apartment community with lots of trees and scrubs but outside of this complex its very urban. I used to see them about 10years ago but they were all killed by traffic. I hope these two will stay safe from the streets, I enjoyed watching them and it’s nice to see wild life is still hanging on.

Thanks for this! I am trying to identify some sounds I heard on a camping trip in Wisconsin recently. This is definitely one of them! I also heard a different one that sounding like some crazy yawning. I haven’t been able to figure out what that could have been–do you have any ideas?

[…] See new post Raccoon Fight for comparison … if you hear these kinds of sounds at night, the sound-makers are most likely […]

If you’re still monitoring this sight, thank you so much for the recording. I have a feeding station set up on the edge of a forest next to my apartment complex. I did so because a couple of raccoons, Bella and Bandit, were causing problems in our complex. The leasing office thought cats were the problem and put out a trap which I confiscated. I put out cat food and stayed up all night and about 1:00 in the morning, Eureka, it was the biggest raccoon I’d ever seen. I told the office about it and they raccoon proofed all… Read more »

You’re an awesome person. Thank you for vetting the cats and feeding the critters. You have a special place in heaven

Thanks, I was just outside with a flashlight trying to figure out what was making these horrible screeches, and from the recording, it was definitely raccoons,exactly the same sounds.

That would certainly raise the hairs, if I heard that in the dark of the night. Thanks for the recording.

I really want to listen to the racoons, but can’t find the link or click into anything that gives me the recording.

We often hear raccoon fights at night. It’s the fisher cats that cause the hair on the back of my neck to rise – an awful sound! Ever record one of those?

Eliza: No, I’ve never recorder fishers but would love to do so at some point. How do you know when you’re hearing fishers?

The recording made my cat sit up and take notice! I have been awakened by coons fighting at night. It is very startling.

Your recording of a raccoon fight sounded very close to the sound of raccoons mating that I heard predawn in my backyard in Seattle. I went out to investigate and discovered it was their bedroom on a tree branch. Not clandestine. Thanks for your recording!

could be mating, for all I know. fighting is often part of the mix in the animal world. the fact that you heard these kinds of sounds and then discovered a pair mating is pretty strong evidence, I’d say.

I love it. Thank you. Loretta

I loved it. Thank you. My dogs were stimulated as well. Wonderful escapism, especially for urban dwellers.
lwc

That’s what i’m here for … to help people escape. Nothing wrong with that!

I will never forget hearing the weirdest, most uncanny (to me) sound of Fishers, when I lived in Vermont! The first time I heard one along the Winooski River at night, I thought a woman was being murdered — absolutely chilling noise. Thanks for these incredible posts!

Lisle: I sure wish I had a recording of the Fisher. When I lived in the Adirondacks, I some strange cries in the dark, but I had no way to verify the source, nor was I able to get any recordings.

Well, I was playing this for my own interest, and my dear little brown dog Latte got all wide eyed and sat us and said woof. When it ended, she immediately lay back down, but her eyes are still open.

Do you think Flower might be hearing Porcupines? They go on forever and make a hair raising loud noises

could be … I have one recording that maybe I’ll post sometime soon.

Do you know what animal sounds like its being tortured to death, screaming & yelling and it goes on for a long time? Maybe it is mating. Several times I have heard this coming out of the woods and can’t see what it is and even the naturalists that I am with, do not know what it is. Since I’ve heard it several times, it must not be an uncommon occurrence. I live in SW OH. But, it does sound like a larger mammal than a woodchuck or raccoon.

Sorry, but I’m not sure. Wish I could hear a recording. Most likely, though, it would be raccoons, just because they are of such common occurrence most everywhere in the eastern US.

I am no longer able to hear videos on your emails I receive. Why?
Pam

You can’t watch and listen to videos in my emails; you have to click through to the corresponding page on my website. Is it on my website that you’re no longer hearing sound?

I think we heard several raccoon fights last week in the wee hours of the morning here in the Blue Ridge. The sound was unearthly, and made me think of animals whirling down a mountainside and back again. Will look forward to your fox posts. Thanks!

I like that … “whirling down a mountainside and then back again.”

The shrill rasping sounds that start on the recording at around 17 seconds and again at 40 seconds are always giveways for me that I’m hearing raccoons. I don’t believe there’s another sound out there quite like them. Good work, Mr. Recordist! How about fox barks? I’ve never had a good handle on telling red from gray. Plenty of both here at our place in the Adirondacks.

I have recordings of both Gray and Red foxes, so at some point I’ll have to publish a blog post that compares the two … maybe sometime in mid-April, when Red Fox screams are likely to be heard.

Click here to find out how.
wpDiscuz
35
0
Would love your thoughts, please comment.x
()
x
| Reply