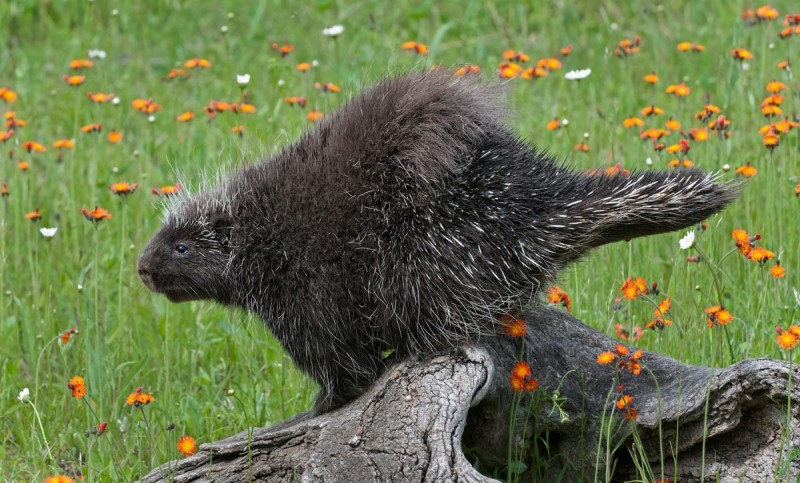 Having just posted recordings of the groundhog and raccoon, several of my readers inquired about the porcupine. So here’s a recording of a squealing porcupine that I made in the Adirondack Mountains way back in 1988, at the very beginning of my nature recording career.

It was the 26th of August and I was preparing to canoe out into a large lake (Stillwater Reservoir) to record the sounds of loons. Just before shoving off, I heard an animal squealing in the forest, quite a distance away. I grabbed my parabola and sprinted down the road in order to get closer. Luckily, I managed to capture a pretty good sequence of squeals before the animal fell silent. I was quite impressed by the sounds, so expressive and animated, yet I had no idea what I was recording. My first thought was some kind owl, maybe a long-eared owl. I was really baffled, although it did occur to me that maybe, just maybe, it was a porcupine.

The mystery was solved about a year later when I played my recording to a porcupine expert, Uldis Roze, who verified that it was indeed a squealing porky (Uldis did research on porcupines in the Catskill Mountains). He said it was probably a female rebuffing the advances of a male. But how can that be? It was August and you’d think a mammal the size of a porcupine would breed in winter or spring. Well, it turns out that porcupines breed from late summer into autumn and have an extended pregnancy (gestation) that lasts a whopping seven months or so, at which time a single youngster (porcupette) will be born.

Below is an additional recording provided to me by Kim Dement, who lives in Grayling, Michigan (she made it using her iPad). Kim tells me that porkys are quite common in her area and actually keep her awake with their incessant screaming during that time of year. As you will hear, this is the same type of sound (animated squeals) that I recorded in the Adirondacks. It’s great to have an example from a different location, supporting the notion that porkys squeal like this over most of their range.

Would you ever imagine that a porcupine sounds like this? I find their squeals simply adorable … every time I play these recordings, they bring a smile to my face.

p.s. On the advice of one of my readers, I checked out Teddy the Porcupine on Youtube. He sure rounds out the vocabulary of squeals and mews … happy sounds in this case, and truly amazing!

[…] porcupine courtship is elaborate, noisy and dominance-hierarchy based. Female porcupines are only looking for a good time for 8-12 hours […]

I’m hearing these same sounds the past couple nights. It’s from a small porcupine out near a tree. Any idea why these sounds are this early in the year? Surely they aren’t breeding now.

I think it is very nice and crazy

OMG I heard this last night out back in our yard around 10pm – in New Hampshire, USA. What an awesome sound! Because I’d seen Teddy on FB before, I thought it might be a porcupine and indeed it was! Such an odd but enjoyable sound!

I heard this in my NH backyard too. But this was in February/March at about 5am. Why would they make that noise this time of year?

I am totally blind and often watch shows on animal planet. During an episode of North Woods Law, they mentioned porcupines, and I wondered if they made noises. Thank you for the wonderful audio.

Just as I remembered! Also the picture is among one of my favorite flowers, the orange hawkweed! So So neat!
Dick

Dick: I too treasure the orange hawkweed, one of my favorite meadow flowers!

Holy Cow! I have never heard such an odd, expressive, warbling insistent sound. Amazing. I would have never guessed the source. It is such fun having all these various critters “songs” coming one after another from you to compare. Thanks, Lang!

Keep going! This sounded a little like a beaver but I’m not sure. Do you have any beaver sounds in your back pocket?

Anne: yes … beaver is next in line.

on an annual ice out trip, 3 of us kayaked and paddle from long lake to saranac lake. day one took us all the way down to a leanto headed towards cold river. after we set up and had dinner in the dark we saw a porcupine waddling down the trail, scared my friend so bad she ran out of the outhouse with her pants at her ankles. that night, i thought there were animals in the woods being murdered and we were next. turns out to be a few (or more) porcupines mating. holy moly what a racket!

Karen: Wish I’d of been there! Both to hear the porcupines squealing and to see your friend running with pants at her ankles!

What a marvelous recording! From other people’s comments here I assume this porcupine was not alarmed, but talking to the world. I’ve seen them several times, but never heard one….. always something to look forward to.

Well, the expert I consulted thought my recording was a female rebuffing the advances of a male, an indication of annoyance. Of course, that was his educated “guess”. The youngster in the youtube video makes similar sounds, but they have a different, more mellow feel … indicating contentment, I presume. But clearly, the porcupine’s language seems to be made up of variations on the squeal theme.

We’ve had those critters living under our camp forever. Never heard vocalizations, just gnawing and scrabbling around.

Marilyn: That was my experience when living in the Adirondacks. Other than my single recording, I never heard porkys sound off, even though there are plenty of them where I was living (out in the woods near Saranac Lake, NY).

I’ll never forget the first time I heard a porky. I was about 14 years old and woke up in the middle of the night with something singing outside my bedroom window. Nobody in the family would believe my tale the next day, and we didn’t know what it was until a year or so later when we captured a baby porcupine and decided to keep him as a pet. Lo and behold, he kept us entertained with his constant commentary. We named him Caruso, after the great opera singer. The sounds that I remember were very musical, and I… Read more »

Kekawaka: What a great story! I’ve heard that porcupine youngsters make great pets, but that the situation gets a bit dicey once they grow up.

Very true. My dad boxed our little guy up at some point, and transported him a few miles down the road so he wouldn’t contribute to the ringing of the young Douglas Fir trees on our place (that was in Northern CA).

Strange and wonderful. We have only seen a porcupine once, in a provincial park in Nova Scotia (Kejemakujik) more than 20 years ago. Now I have a “song” to match his/her beauty. First the the “hog” fight, next the raccoon scuffle, now the porcupine squeals…can’t wait to see/hear what’s next. As my years go by, I so appreciate your nature sounds and photos. They bring back lots of memories. Thank you, thank you, thank you.

Great! I am imagaging being in the woods alone and hearing that!

I’ve only heard it once and can’t wait to hear it again, and maybe even get an A-plus recording! I’m not really happy with my old monaural recording, though it does get the point across.

Wow! Those are amazing sounds! At times, it sort of sounds like air being let out of a balloon. Very strange — and cute!

Well, I just checked out Teddy the porcupine eating a pumpkin and there he is talking up a storm … happy mews and squeals, pleasure sounds! How sweet can it get?

Well, if you like adorable + porcupine, you tube hosts clips of Teddy Bear, the porcupette resident with a zoological educational group in Dallas, TX. Go see! He may have been a model for the Star Wars’ Ewoks.

This is great! Spent Sunday looking at porcupine tracks, scat, feeding sign….. even saw one in a tree…this compketes the experience. Thanks

Zentracker: Glad you like it! As an aside, might you add your pic to your comments via gravatar.com? I want to see more faces!