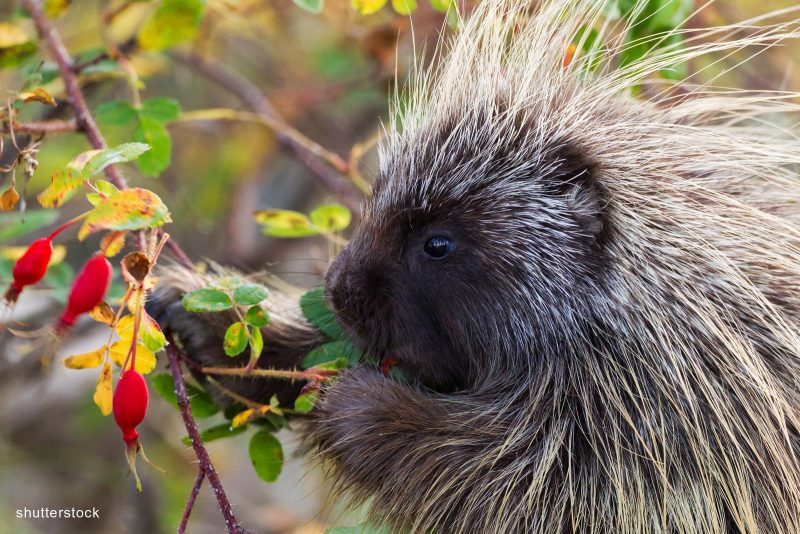 A Porcupine squealing in the middle of the night. Recorded around midnight 25 September 2017 in Shindagin Hollow near Brooktondale, New York. © Lang Elliott.

Ever heard a Porcupine squeal? Well, I heard and recorded a squealing porcupine long ago in the Adirondack Mountains of upstate New York, and that’s why I was able to identify the source of the mysterious sounds I recently captured in my beloved Shindagin Hollow.

It was dusk on September 24 and I set my soundscape mic in Hemlock forest, at the top of a ledge overlooking above the hollow. I left it there for the night and excitedly checked out my recordings the following morning. I was thrilled to discover that a little before midnight, a Porcupine slowly rambled through the hollow, stopping in one spot and giving a number of call sequences. Over about an hour, I captured about eight different outbursts, which I’ve pulled together into this 2.5-minute recording, deleting long intervals when the quill-pig was quiet. There was also a visitation from a Barred Owl, so I’ve included it in the compilation as well. 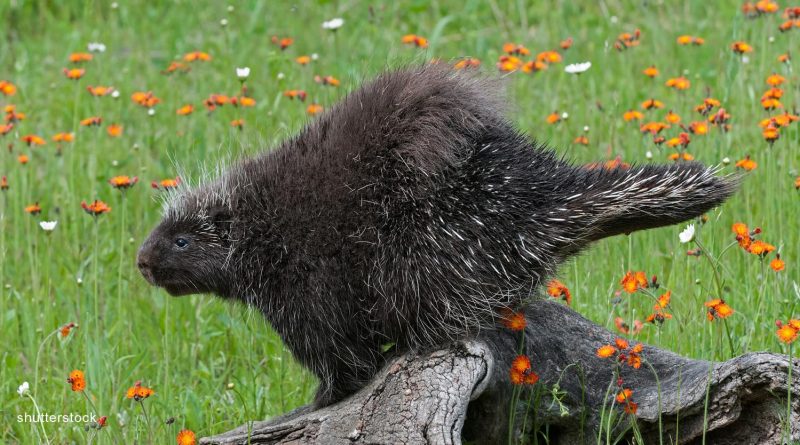 I really enjoy hearing Porcupine squeals because they are so animated and full of emotion. What is going on here? Well, my somewhat educated guess is that there are actually two porcupines involved. A male is in pursuit of a female and it is the female who is doing the squealing. I say this because when I recorded my first porcupine in the Adirondacks many years ago, I sent the recording to a biologist who was working on porcupine behavior in the Catskills. He told me that the squealer was an upset female, probably pursued by a male wanting to copulate (hence my inclusion of the word “panderings” in the title … even if it’s not a real word). So that’s the story I’m telling you right now, but I stand corrected if anyone reading this is more intimate with porcupine language than myself.

Some years ago, we were camping at one of many national parks out west. During the middle night, we heard someone humming melodically (I’m talking Frank Sinatra) around our tent. It kept up for quite some time, so we thought that perhaps an inebriated camper was having difficulty finding his way back to his tent. We went outside and were blown away to find a porcupine happily humming all this time, and he continued to do so even after we showed ourselves. The next day we found a ranger and asked if porcupines hum. She didn’t know but looked them… Read more »

I’ve never heard one hum, but I do know that they make mumbling or grumbling sounds … some which may sound a bit like humming?

Wow! We’ve heard this off and on in the last month and I knew it wasn’t a fox, raccoon, or opossum, but never thought of a porcupine! Now we know! Thank you!! So love your recording and your newsletters!! Thank you so much Lang!

So this is what a porcupine sounds like. They are one of my favorite animals, although I love all animals they are at the top of my list.And the owl calling makes that much better.Thanks again Lang

I don’t know porcupine chatter, but I throughly enjoyed that. They are adorable critters. Never seen one in the wild unfortunately. Maybe someday.

Wonderful, as usual! I’ve heard this sound many times at my place but wasn’t absolutely sure it was a porcupine, did recognize the Barred Owl though. Thank you!

I’m hoping to get more this weekend, assuming the porky hasn’t moved out of the area.

Having never heard one before, the vocalization somehow seems to match its source! So wonderful!

Interesting as always. Having never encountered a porcupine in the wild. It was exciting hearing their squealing. Thanks

I like to call them “quill-pigs,” although I don’t think anyone else uses that name.

Actually, I was wrong … some have used that name:

In fact, the word “porcupine” is derived from Latin porcus (pig) and Latin spina (thorn or spine), so translated it does in fact mean quill-pig, or rather pig-quill.

Question: Being a prey animal, why would they give their location away? Are they actually establishing territory or advertising for a mate? And why mate now, before winter?

Fishers are the main predator in northern areas, but we don’t have them here. They may be taken by coyotes, foxes, bear, even great horned owls, but probably not so often.

Great recording Lang! Thank you so much for sharing! Btw there are fishers in this area now. They’re making a come back in our area. I am curious why the porcupines are vocalizing this time of year?

I learned what this sound was a few years ago. One night I realized I was hearing it in stereo. I went out onto my deck and in a little while the sounds converged as a mama porcupine and her porcupette converged in a spot illuminated by light from a window. Then to my surprise, they stopped right there and baby nursed for quite awhile, allowing me to photograph them.

And you’re saying it made these kinds of squeal calls?

The sounds I heard were more like the first third or so of your recording — and not like the “screaming” sounds. I would have described them as sounding more like a contentment sound — like someone kind of humming to themselves as they go about their daily business. But all the sounds are definitely recognizable as porcupine sounds. I witnessed mom and baby on July 2, 2013 in southern NH.

Here’s another contented porcupine. He has several videos online. https://www.youtube.com/watch?v=_dnB3IapeAA

Oh that’s so cool … yes, the sounds are clearly related to those in my recording, but absolutely of the contentment variety. Very sweet. I’d love to record such a happy porky.

Pat: I just pulled this off the internet at nhptv.org:

Porcupines mate in late summer and early fall. Porcupines are very vocal during mating season. Males often fight over females. The male performs an elaborate dance and sprays urine over the head of the female. Seven months after mating the female gives birth to a single baby. When the baby is born, its quills are soft. They harden about an hour after birth. The baby is begins to forage for food after only a couple of days. The baby will stay with its mother for about six months.

Wow! I’ve never heard a porcupine before. Your site is wonderful!

Click here to find out how.
wpDiscuz
25
0
Would love your thoughts, please comment.x
()
x
| Reply