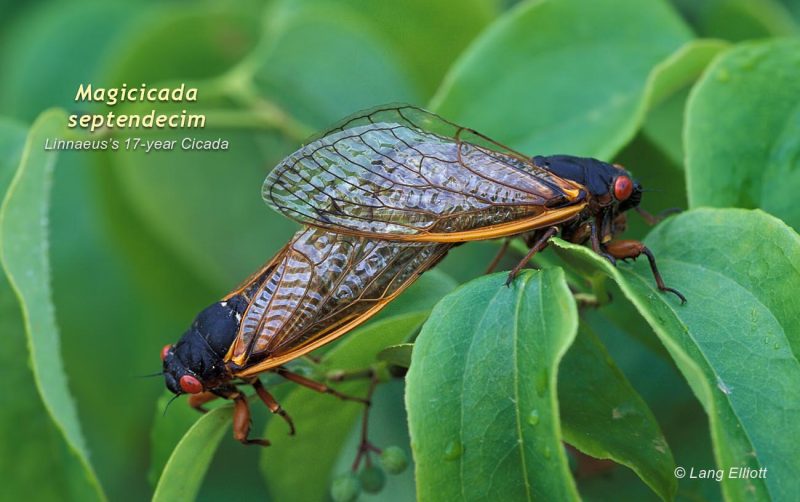 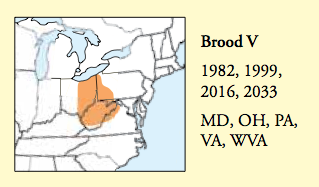 During my recording expedition, I made a quick swing through eastern Ohio to experience the 17-year Periodical Cicada emergence … that of Brood V, which ranges over the eastern half of Ohio, the western edge of Pennsylvania, and throughout most of West Virginia (see map).

There are three species involved, though most of the chorusing is dominated by two species: Magicicada septendecim and Magiciada cassini. The featured recording includes both these species … septendecim producing a low-pitched drone and cassini a much higher buzz or trill that is often pulsating. For those with excellent high frequency hearing, listen also for faint high-pitched clicking, tst-tst-tst-tst-tst-tst, given occasionally by the third species, Magicicada septendecula.

The constant drone of M. septendecim can get on one’s nerves after awhile. It is persistent, beginning in early morning and lasting until dusk. The warmer the weather, the louder the calls. What is interesting about septendecim’s drone is that it is comprised of countless males making distinctive individual calls. Here is a closeup of a single male calling, with the droning chorus heard in the background:

The slow pulsing of cassini choruses really stands out. Individuals within a chorus often synchronize their calling to produce an effect that sounds to me like the slow-paced “breathing” of a cicada super-organism:

A chorus of Magicicada cassini demonstrating clear pulsations of loudness with a periodicity of around 5-6 seconds. Recorded 3:30pm, 31 May 2016 in Hocking Hills State Park, southeastern Ohio. The constant, low-pitched drone of Magicicada septendecim is also present. © Lang Elliott,

Incidently, individual M. cassini give a series of clicks before they buzz, but the clicks are masked in large “breathing” choruses and are often difficult to hear. Here is a single male calling:

I will end with a recording of cicadas mixed with bird sounds (most notably Tufted Titmouse and Yellow-billed Cuckoo). Listen for all three species of cicada … the low drone of Magicicada septendecim, the high-pitched buzzes of Magicicada cassini, and the very high clicking calls of Magiciada septendecula:

Featuring the calls of all three species of Brood V Periodical Cicadas, along with Tufted Titmouse and Yellow-billed Cuckoo. 4:30pm, 31 May 2016, Hocking Hills State Park in southeast Ohio. © Lang Elliott.

A friend has informed me that the cicadas are still going strong in Ohio, but their calling will no doubt taper off quickly over the next few weeks. By early to mid July, the forest soundscape will be entirely free of their loud drones and buzzes, sounds which will not be heard for another seventeen years (note, however, that several other periodical cicada “broods” will emerge before then and will overlap small portions of Brood V’s range; see readings below for brood range maps).

For more information about Periodical Cicadas, check out the following websites:

As always, I invite your comments!

I enjoyed your inclusion of the map where these “white noise” creatures are found. I play your soundtracks while I putter in the kitchen. It lowers my stress, because hearing them in the background tricks my brain into thinking I am out in nature, rather than doing domestic chores. Thank you for your valuable contributions to our world.

This is so cool! Thank you. We have cicadas here, on going, but not so much this summer. The last mass of them was 2011. My grandchildren and I gathered the dead creatures for freezing to send to Athens UGA, as part of their cicada research. In 1986, when we were having our pool dug out, the cicadas were so loud and abundant that their sound drowned out the bulldozers. We actually couldn’t hear ourselves talk to each other, if we were outside, because of the loud volume of cicada sounds. I love them. I never knew how they made… Read more »

Here is an excerpt from my poem, The Garden Spirit.

Cicadas urge their
congregations to arise!
with a sweet cacophony
of hot noises
and shaded places.

Nice poem Gena! I like “hot noises and shaded places”.

I’ve been spending as much time with them as I can! They aren’t up in Cleveland or generally along Lake Erie, but are just a bit south of here and even a little east of us in a few places.

Today I tried coordinating my breathing with the ebb and flow of the M. cassini chorus – it worked pretty well. I find the septendecim chorus to be very peaceful.

Those birds must be working pretty hard to sing over all those cicadas. It’s probably not as challenging as singing over human noise, though!

I too find the septendecim chorus peaceful, when heard at a distance, as in my featured recording. But when they are thick and close, I wanna run.

I live in Westmoreland County PA. Big fat birds around here right now. Big strong babies too with all the big juicy cicadas to feed on!

I can only imagine!

Are these similar to those we hear in France (the Drôme River valley, north of Provence)? Shops are full of locust reproductions in ceramic, etc. We spend fall (mid-September to November), so we “miss” the calls. But the creatures are beautiful! And the close-up videos are wonderful — Thank you, Lang!

Periodical Cicadas only occur in eastern North America. Most cicadas are “annual,” in that some emerge every year, even though individuals may take many years to mature. You’re no doubt hearing annuals, but that doesn’t mean they can’t occur in high numbers (they often do and can produce quite a cacophony of sound).

Most cicadas produce high-pitched buzzy trills that often pulsate. But there is much variability in sound as there are approximately 3000 species in the world.

Oh my gosh, thank you for this information! I live in Washington County smack dab in the middle of six acres that are surrounded by trees! At times, the Cicadas are so loud that it sounds as though alien ships are hovering overhead. Although my husband and I appreciate nature and all that it offers, there seems to be a limit with this one! I sure am happy for the birds though as they have ample supply of protein to feed their young! Thanks Lang for all that you do!

Marie: It’s great to hear that you appreciate the recordings I’m providing. Hope it allows you to decipher the chorus, while it still exists. A few years ago in West Virginia, I spent a couple of weeks in the midst of an emergence. I must say that I got very tired of the incessant drone and was relieved when I finally left. Nonetheless, it’s quite a natural history event. And given that it only happens once in seventeen years (in most areas), it is a miraculous event to be treasured, at least on some level.

At my grandparents home in SW Oklahoma I would meditate in the warm evenings. The cicadas seemed to buzz through my head, swooping sound in and out of my mental atmosphere. I felt alive to participate inside this rich aural environment.

Cicada sounds have a way of drilling into one’s mind, for better or for worse. Reminds me of a haiku poem by Basho that goes something like this:

I am so awed with your unique passion to give us sounds of nature we hear but don’t know what is making the sound! Thank you so much for educating us and giving us visual as well as auditory awareness! I love it!

Awesome! I think I was even more thrilled to actually see the cicada singing. What amazing work you do. Thank you!

tip of the iceberg on video … I have gobs of great footage, not yet published.

thnx so much- this was great. I had always wanted to go witness, but it wasn’t to be….

OMG! This was the most informative of your blogs. So much amazing information and I read up on some of the links. What I am mystified by us why the three species hang together and emerge in the same brood. Maybe they benefit each other somehow. The sounds are eerie and I’m glad we don’t have any around where I live.

I just cracked the surface of all the work that’s been done with periodical cicadas, their brood distribution and evolution, genetics, etc. The guys who created Magicicada.org have done a tremendous amount of research … John Cooley and Dave Marshall in particular. And many others as well. It’s such a deep subject that an expert could talk for hours on end explaining the complexities of periodical cicada evolution.

Click here to find out how.
wpDiscuz
21
0
Would love your thoughts, please comment.x
()
x
| Reply