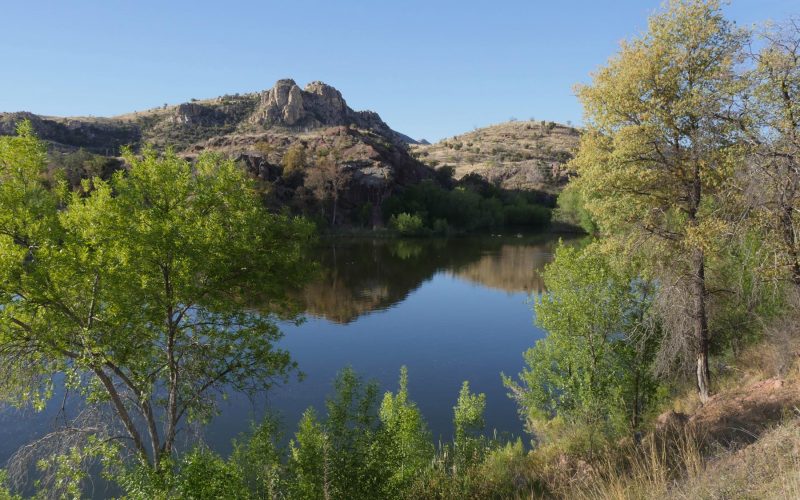 IN EARLY APRIL I made a brief, evening-to-dawn visit to Pena Blanca Lake (elevation 4000 feet) in the scenic Pajarito Mountain foothills to the northwest of Nogales, Arizona, a mere four miles from the Mexican border. A popular destination for nature lovers (including fishermen), the lake and its surroundings yielded some very exciting recordings.

The most surprising catches were two beautiful impressions of Coyotes, captured by placing soundscape microphones at two different canyon-like inlets to the lake, and then letting the recorders run all night long. I really enjoyed checking out the recordings the following morning, hoping to find some extraordinary sound events that occurred in the dark of the night. Boy, was I pleasantly surprised!

Here are four recordings from my visit, including the coyote captures mentioned above:

Coyote Magnifico: A closeup portrait of a pack outburst occurring very close to the microphone. Recorded along the inlet at the south end of the lake. 3am. 8 April 2017.

Coyote Echo Chamber: A coyote outburst, with the sounds of the pack echoing off rock walls along the inlet on the southwest side of the lake, just below a picnic area. Also features Elf Owl wing noise, barks and outburst. 5am, 8 April 2017.

Dawn Chorus at Pena Blanca Lake: A diverse soundscape recorded at dawn at the south end of the lake, along an inlet. A variety of birds sound off. Listen for the calls and songs of Spotted Towhee (I think), Belted Kingfisher, White-winged Dove, Northern Cardinal, Northern Raven, Gila Woodpecker, American Coot, Pied-billed Grebe, Yellow Warbler, a hovering hummingbird at the end, and lots of wing flutters (note that I’d much appreciate help with this species list). 6am, 8 April, 2017.

Bell’s Vireo Portrait: A Bell’s Vireo sounding off in a patch of willows next to an inlet, with the sounds of White-winged Doves, Pied-billed Grebe, American Coot, Gila Woodpecker, Belted Kingfisher, and more. Note lots of wing flutter of nearby birds. Recorded shortly after dawn along the inlet at the south end of the lake. 7am, 8 April 2017.

Here is a map showing the location of Pena Blanca Lake:

I hope you enjoyed these recordings! My next blog post will celebrate soundscapes from another great natural area: Las Cienegas National Conservation Area near Sonoita, Arizona. So please stay tuned!

Music for the soul!! We currently live in Phoenix and are often serenaded by coyotes in the evening and greeted by the gentle coos of mourning doves each dawn. These are beautiful recordings, and we especially loved the coyote canyon!

Echoing coyotes!! I think they are really enjoying hearing their own singing as much as us, maybe more!

So enjoyable! Thank you!

oh, I just loved the echo chamber, hearing the sounds seemingly bounce of boulders and careen around.

Yes, they do indeed bounce off boulders … or rather rock cliffs that occur along the shoreline of the lake.

It was quite astounding. Wish I had actually been there to experience it firsthand.

I love coyote conversations! I’m visiting a friend who built a small house in the desert not far from Nogales…Pena Blanca lake is now on my itinerary . Thanks Lang!

Gorgeous! Hope you were there for the cactus bloom.!

Susan: A few cacti were blooming, but most species bloom later in the season.

Click here to find out how.
wpDiscuz
14
0
Would love your thoughts, please comment.x
()
x
| Reply