A Quick Update: After a whirlwind trip through Texas, I’m now in the Chiricahua Mountains of southeastern Arizona, holed up in a small room at a lodge, and madly trying to catch up with blogging and podcasting.

It turns out that it’s very difficult to stay on top of things while traveling, but I’m doing my best to turn things around and share my adventure as I promised I would do. First, I will publish blog posts for each of three locations I’ve visited thus far (Lower Rio Grande Valley, Lost Maples Natural Area, and Big Bend National Park), and then move on to producing the corresponding podcasts. The first post follows below … 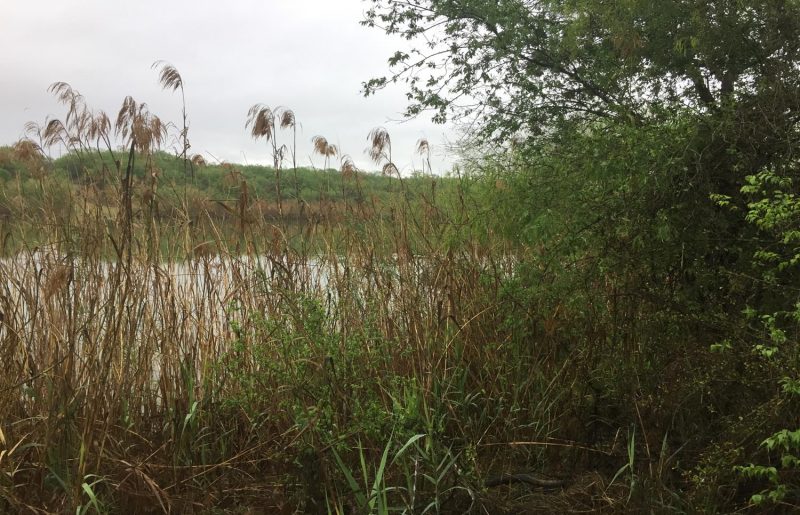 So here is my blog post for the Lower Rio Grande Valley (LRGV), which I visited with my field assistant Beth Bannister from March 3 through 5. The above photo shows typical riverine habitat along the Rio Grande River, which is where were got most of our recordings. It is very difficult to get pristine soundscapes in the LRGV … too much development and associated noise, with constant loud rumble in the background (which I’ve been struggling to eliminate from our recordings).

Being very early in the breeding season, there was not a lot of songbird activity, but we nonetheless got some interesting recordings, several of which are featured below (with more to be shared in my forthcoming podcast).

I captured a wonderful soundscape at dusk in Bentsen Rio-Grande Valley State Park near Mission, Texas. It features the vibrant and haunting night-call of a Common Pauraque (with others sounding off in the distance), along with the soft trills of two Eastern Screech-owls. It’s a brief recording that was cut short by the sudden arrival of a prop plane, but it’s a nice one nonetheless:

Beth and I both had good luck with recording the cacophonous calls of Plain Chachalacas in a small refuge at the river’s edge below Salineno, just downstream from Falcon Dam. Using a parabolic reflector microphone, Beth was able to get a clear closeup of a duetting pair, making it easy to hear the different roles of the male in female in the duet (the female makes the higher-pitched calls (at least I think; someone correct me if I’m wrong):

A parabolic closeup recording of a pair of duetting Plain Chachalaca. Recorded by Beth Bannister in riverine forest next to the Rio Grande at Salineno below Falcon Dam. 7am, 5 March 2017. © Lang Elliott/Beth Bannister.

While Beth stayed close to the parking lot, I wandered quite a distance downstream with a microphone deigned to render a spacious stereo effect. To my delight, I was able to record several pairs of Chachalacas sounding off from different directions. The usual pattern is that one pair starts the ruckus by duetting. As that pair ends their outburst, another pair responds with their duet. And so it goes until all the Chachalaca pairs in the other have made themselves known:

Several pairs of Plain Chachalaca sounding off at dawn in the riverine forest along the Rio Grande at Salineno, Texas. 7:45am, 5 March, 2017. Listen also for the loud calls of a Greater Kiskadee, the resonant coos of White-tipped Doves, and the harsh rattle of a Ringed Kingfisher. © Lang Elliott.

For me, the raucous daytime calls of Chachalaca and the vibrant, haunting nighttime soundings of Pauraque are audio fingerprints of the Lower Rio Grande Valley … the only place in the United States where the sounds of these Central and South American species can be heard.

As you might guess, we got recordings of other species as well, and a number of them will be featured in my forthcoming LRGV podcast. So stay tuned to hear Greater Kiskadee, Long-billed Thrasher, Golden-fronted Woodpecker, Green Jay, White-tipped Dove, and more!

‘SOUNDS’ as though I’m missing out on a whole other world. Thank you for bringing it to me, Lang.

Cool and exotic to my northern ears! And fascinating that the Rio Grande Valley is the only place in the US where you will hear these birds, the Common Pauraque (a cousin of the Nighthawk?) and the lively (and not so Plain) Chachalaca! Thanks for posting these recordings ahead of your podcasts. It feels like a mini adventure to the south….in my mind’s ear at least. 🙂

Thank you Susan and others. It was a good visit to the LRGV, but fun and productive. I only wish there were quiet places down there for recording soundscapes. It proves much more productive to home-in on birds with a parabola, but that’s not the purpose of this trip, although I’ve done just that during previous visits to the area.

these are hilarious and fun!

Love the beautiful and soothing night calls! Thank you for sharing!

Fantastic! I love the Pauraque and Eastern Screech-owl.