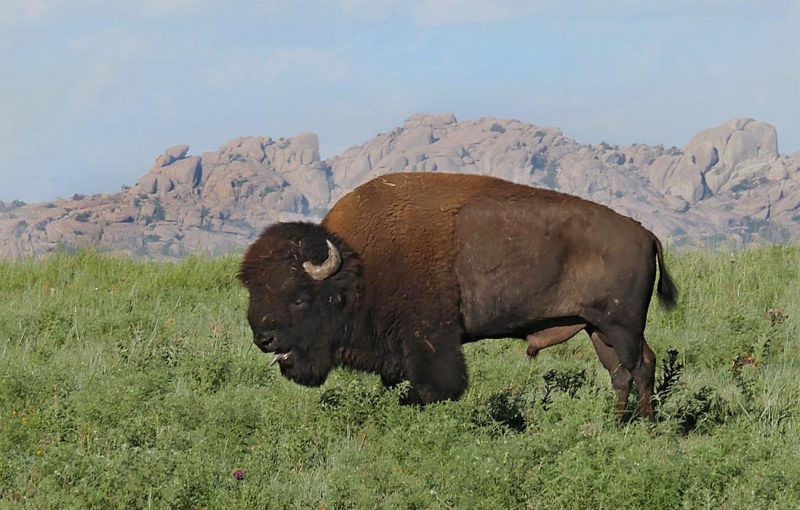 After recording in Missouri’s tallgrass prairie, I drove south and west to spend an afternoon and evening in the Wichita Mountains National Wildlife Refuge in southwestern Oklahoma, followed by an overnight at Enchanted Rock State Natural Area in the Hill Country of Texas. Work was tough at both locations. Temperatures soared to around 103F during the day (miserably hot, according to my standards) and a fairly stiff breeze made it difficult to get clean recordings. Nonetheless, I managed to snag a few really useful soundscapes. 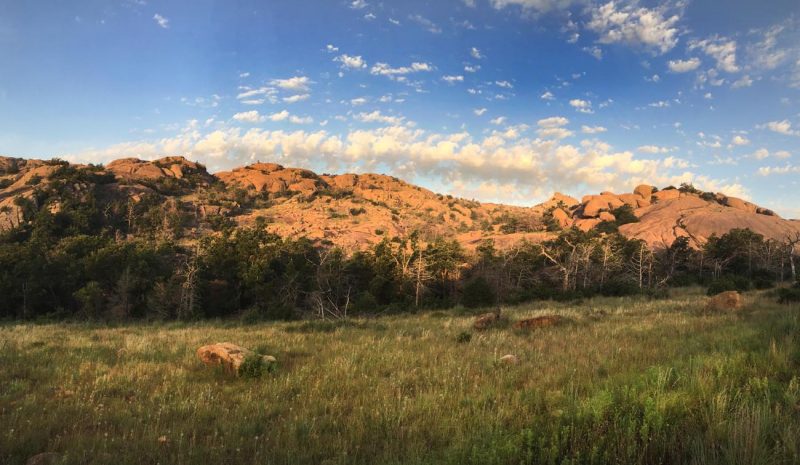 The high point of my Wichita Mountains adventure was coming across a herd of American Bison (buffalo) walking alongside the main road through the refuge (see photograph and featured recording at top of post). I could hear the males growling as they followed females, so I drove further up the road, quickly set up my soundscape microphone, started my recorder, and then retreated back into my car. The result was quite amazing. It was the beginning of the rutting season and the males were clearly enthused. What surprised me is that the males stick out their tongues when they vocalize (pictured in the photo).

I got a little over a minute of high-quality growling, and then a noisy car full of noisy people suddenly showed up. They stopped right in front of my microphone and then yelled out at me: “What is that weird-looking thing next to the road?”. I felt like saying “It’s a microphone, you morons; would you please shut up and go away!”. But I just smiled, calmly told them what it was, and then watched in dismay as the bison trotted over the top of a hill and disappeared from view.

Not far from where I encountered the bison, I visited a colony of Black-tailed Prairie Dogs and got several nice recordings of individuals nervously barking and squealing at me from next to their dens: 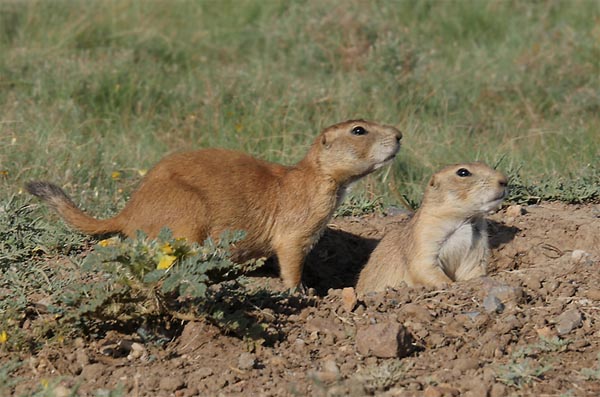 I spent most of the afternoon resting in the shade next to a lake and was grateful when darkness (and coolness) finally arrived. Before long a raucous chorus of Common True Katydids, Pterophylla camellifolia, erupted from an oak forest next to the lake: 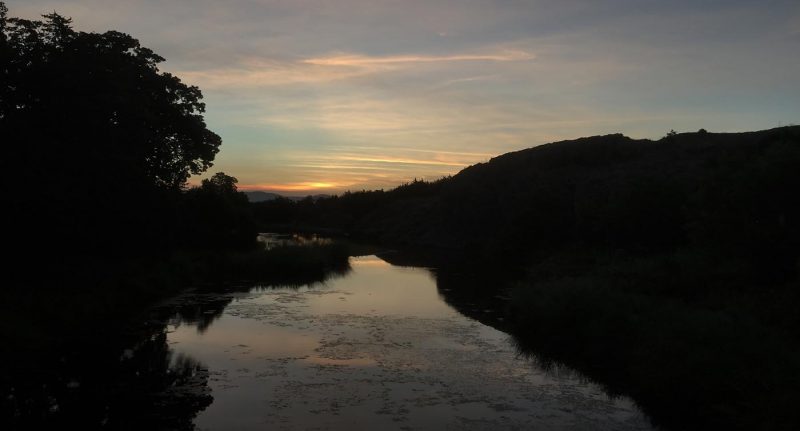 I heard a screech owl trilling way off in the distance, but I had no luck getting close enough for a recording. So I drove the roads for awhile, listening for something new. Luck was with me. At the south entrance to the refuge, I came across an entirely new insect sound … loud rattles from Truncated True Katydids, Paracyrtophyllus robustus, coming from small oaks and junipers on a dry, rocky hillside. This katydid looks almost identical to the Common True, and exists in both green and yellow-brown forms: 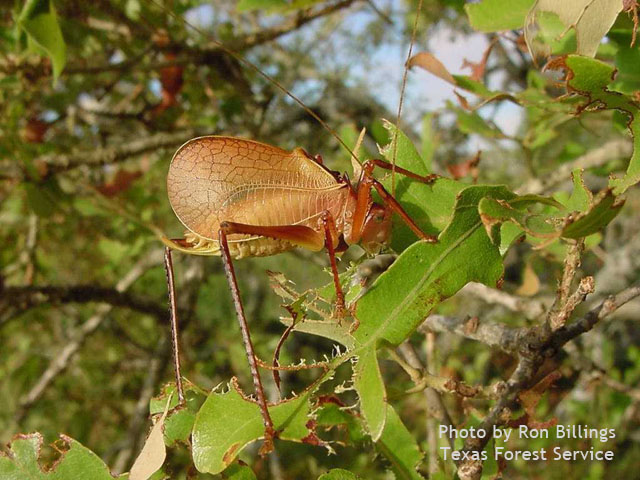 This was an exciting discovery. Checking the species profile for Truncated True Katydid on Tom Walker’s Singing Insect Website, I found that the range is thought to be restricted to central Texas. But now I know that they also occur in southwestern Oklahoma, about a hundred miles further north. The result of climate change? Or were the more northern populations simply overlooked?

I left Oklahoma the afternoon of August 4, arriving that evening at Enchanted Rock State Natural Area in the beautiful Texas Hill Country. I quickly set up camp and awaited the coming of darkness. The breeze soon died down but the insect chorus was rather boring. I was tired, so I decided to call it a night, hoping there would be some action in the morning. And action there was … I awakened at first light to a wonderful chorus of White-winged Doves. They were all about the campground and cooed like crazy for nearly an hour, to my considerable delight! In the following recording of the doves, listen too for the gentle chirps of crickets, the sharp check! calls of a Northern Mockingbird, and other bird and insect sounds: 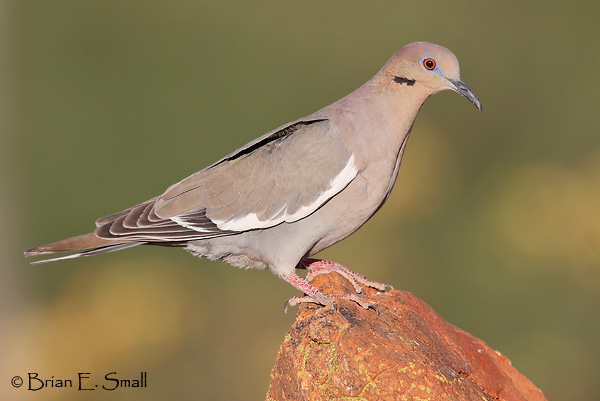 I hope you have enjoyed these highlights from the Oklahoma and Texas portion of my trip. If it weren’t so miserably hot, I might have spent more time in both areas, and even driven down to the Lower Rio Grande Valley. Oh well, maybe next year. Now it’s time to head home, but not without visiting some interesting natural areas along the way, including the marshlands of coastal Louisiana, the swamplands of southern Arkansas, and the forested hills of western Kentucky. So please stay tuned for trip highlights from those areas, coming real soon (as long as nothing else gets in the way).

My little mini Dachshund, curled up here on my lap, was especially interested in the dove vocals, tilting her head this way and that as she listened. Thank you for sharing these wonderful sounds of nature.

It makes me happy when I learn that dogs and cats like my recordings. They can be rather difficult to please!

I so like how you hear our world, thanks for sharing the recordings and the behind the scene observations.

I so look forward to how you hear our world,thanks for sharing.

As ever the vast world of American wildlife is opened up to me through the sharing of your recordings. Especially your focus on soundscapes gives me a sense of being there on the journey myself…And all this from my wee roundhouse in Scotland.. Thanks Lang

So wonderful, Lang! Love listening to your recordings before turning in for the night. Thanks so much for sharing these!

Totally enjoy hearing the Music of Nature .Off in the morning with a carload of Silkie Chickens and Cochin Bantams. I can assure you, the sounds I will listen to on this long trip towards Austin, will be annoying not peaceful ! Roosters crowing and hens clucking. Oh and drama queens laying eggs. Now if they win at the show, they can make all the noise they want on the way home !

Thank you deeply for sharing this brief sonorous introduction to the majestic wild American “Bison bison”. I hope that your effort here inspires many to explore sites such as buffalofieldcampaign dot org to learn how we as a nation treat our national mammal … ’nuff said, but it ain’t pretty. I encourage all so moved to listen, also study, learn and understand and perhaps then choose to support gov policies that guarantee the unharassed freedom of these great animals.

Sharon: I just checked out the website you mention. Looks very much worth supporting!

Thanks for these. Even listening on my phone there is a lovely rich atmosphere to these recordings.

Thank you for sharing these amazing soundscapes! I used the bison growls to wake up the household today…so wild and just resonated through the house! Your sounds transport us from suburbia out to the wild, a perfect way to start the day! We are so appreciate of your work.

waking up to the growls of bison … sounds good, but I sure wouldn’t want one to lick my face!

I loved all of your recordings, Lang. It’s so nice to hear sounds from other parts of this country.

Loved the amazing and thrilling sounds of the Buffaloes!!! Most awesome

I adore the doves, we have 2 lovers that live in a Blue Spruce tree outside our bow window 🙂
Every year they return to our Christmas tree to have their babies . . . such a joy to watch & listen to!

Yep … I love all our native doves, partly because they make low-pitched melodic coos that help fill the bottom-end (frequency-wise) of soundscape recordings. Not many birds call out in that frequency range.

Lang, we are so lucky to have you share your wonderful life’s work w/ all your devoted listeners.
Thank you & bless your heart 🙂

Love how the contour of the rocks in the bison photo mimics that of the bison. And, of course, all the audio recordings. Thanks!

Even though the photo ended up a bit blurry, I was excited about the background. As you say, it mimics the shape of the bison, plus it gives one a sense of the habitat.

ALSO … seeing that you used the word “Bison,” I think I’ll change those references in my blog. “Bison” is actually the correct term to use, due to confusion with buffalo in Africa and Asia.

Thanks, Lang! I love the southwest!

Technically-speaking, I didn’t quite make it to the actual “Southwest,” meaning New Mexico and Arizona, but I plan to spend lots of time recording there next year, if all goes as planned. I currently have only sparse material from that portion of the country.

I guess I knew that but still, they’re of the same spirit. 🙂

Click here to find out how.
wpDiscuz
26
0
Would love your thoughts, please comment.x
()
x
| Reply