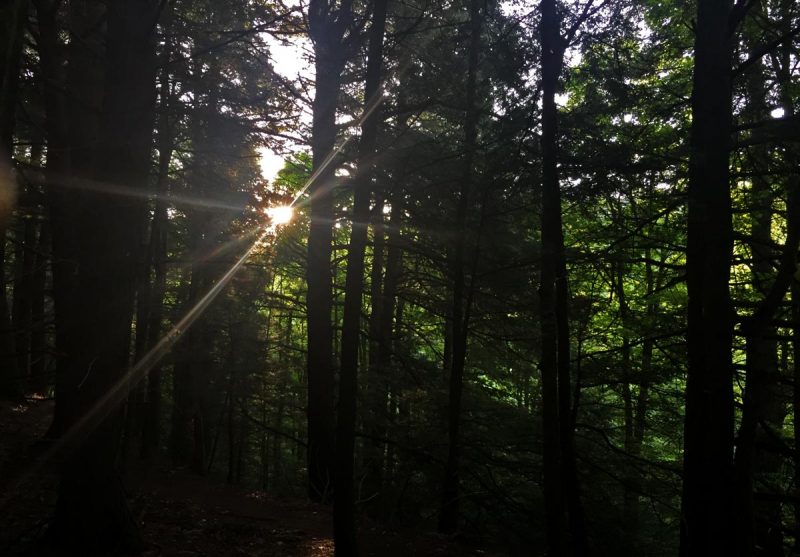 Hermit Thrush singing with drip from trees after rain. 5:10am, 7 June 2016. Shindagin Hollow near Brooktondale, New York. © Lang Elliott. Please play at a moderate to low volume to simulate a natural listening experience.

What could be more relaxing than listening to a Hermit Thrush singing after a rain, with water dripping from the trees?

Last night I visited Shindagin Hollow at dusk. I was surprised by the number of Hermit Thrushes I found singing in the mixed forest, especially areas with lots of towering Eastern Hemlocks. I tried recording, but there were jets passing high overhead and lots of traffic noise, both in the distance and close-by on the road that passes through the hollow. I did manage to capture several brief parabolic closeup recordings of both a Hermit Thrush and a Veery, but I was completely unable to gather any useable soundscapes. So I went home, slept soundly, and then rose early so that I could be present for the dawn chorus.

It rained off-and-on through the night but the sky was clear when I arrived at the hollow at 4:30am. There was so much drip falling from the forest canopy that it sounded like it was raining. The first bird to sing was a robin that chimed-in at 4:40am. Soon after, the Hermit Thrushes began and it took me nearly twenty minutes to home-in on one that wasn’t overwhelmed by the song of a robin or some other species.

The result is just wonderful, at least to my ear. The Hermit Thrush, which was singing from high in a Hemlock almost directly overhead, is not too close nor is it too far away. It is at just the right distance for a pleasurable effect that allows one to hear the intricacy of the songs without being overwhelmed. The drip also sounds good, although I must admit that I had to remove a dozen or more loud splats from drops that fell too close to my mic (thank goodness for sophisticated editing software that allows me to do this without interfering with the bird songs).

As you can imagine, I am very pleased with this morning’s catch. It’s the first really nice Hermit Thrush recording I’ve made this season. Such an exquisite soundscape featuring a voice that is at once ethereal, tender, gently caressing … the voice of solitude, of a shy and hidden bird of secluded forests.

Naturalist John Burroughs thought the Hermit’s song an expression of “serene religious beatitude” that embodies “a peace and a deep, solemn joy that only the finest souls may know” … “O spheral, spheral! O holy, holy!” I only hope my recording conveys the essence that Burroughs so elegantly describes.

Let me know what you think of this recording. Does it affect you the way it affects me?

NOTE: If the louder drips are bothersome, I can mellow them out somewhat. Let me know if that seems necessary.

I regularly hike through the Adirondacks and forage for edible mushrooms like chanterelles. I love these bird songs and it took me a while to track them down to this thrush. This song is the true indicator that you have found unspoiled woods. Thank you for making a loop of it. I can now sleep to their songs.

Found this while trying to better understand TS Eliot’s Hermit Thrush reference in “What the Thunder Said.” This is gorgeous. I understand now.

beautiful, Lang! they’re the Vermont state bird — lived there for seven yrs, and really miss hearing them. Thrush song is quite magical —

Totally magical … as are the songs of the Veery and Swanson’s Thrush (Wood Thrush less so for me).

How absolutely wonderful to listen to the Hermit Thrush! The absolutely clarity and detail of his song – and your recording of it – are a delight! They are rare nesters here in NE Ohio, and I have never heard one sing here.

Nice to hear the Veery calling, too!

Glad you like it Lisa. I work very hard to get aesthetically-pleasing performances.

How lovely. I can’t think of anything more beautiful to listen to. I’ve been listening to your cassettes and audios since first purchasing a few from you in the early 80s at a festival in Woodstock. They’ve been so enjoyable and a wonderful homeschooling tool, as well.

Just wonderful. Lovely in its simplicity. As always, wish I could be there.

Lovely. Could you identify some of the other birds as well? I like such distinct local “orchestras” of different species. They vary from place to place. And this bird song season only lasts a few weeks.

• very high-pitched chipping and songs of a Blackburnian Warbler (singing its dawn song)
• songs of a Magnolia Warbler (I think) … weet, weet, weeteeo
• distant veeyer calls of a veery near the end
• red-eyed vireo (or possibly solitary vireo) obvious at times

The combination is lovely, no need to change a thing.

You’ve out done yourself this time Lang, I felt like I was right there w/ you in Shindagin Hollow : < )

A few minutes ago I saw (my first time ever) a Baltimore Oriole up close & personal . . . it's a Red Letter Day!

ah … love those orioles. We have quite a few where I live. They sing like crazy when they first arrive from migration. Now I don’t hear them so much.

wow this is one of my favorites yet in terms of absolute exquisite beauty–the song along with the soothing patter.

Mmmm, beatific. Wonder if Eleanor Farjeon was inspired by this when she wrote Morning Has Broken. Hermit Thrush holds a cadence and phrasing that keep bringing the beloved old hymn to mind. Would love this as one more of the Green Cathedrals for the meditative grouping. For some reason I can’t get a mental image based on the rain-drip sounds, weird (me weird, not the recording!) Is the forest carpeted with deciduous leaf litter from last fall?

It was mixed forest with lots of hemlocks, so the leaf litter was composed of both hemlock needles and hardwood leaves that fell the previous autumn. A lot of the splats, though, are drips hitting green leaves in the mid-canopy and understory.

p.s. I think I have enough meditative soundscapes for two groupings. I need to get on that, given that there will be some demand for the mp3 downloads (or hardcopy CDs, which are much more problematic for me in a production sense).

I like this recording so much that I’ve been looping it continuously for the last two hours.

Lang, very pretty recording. My 83 year old ears wearen’t bothered by the drips. In fact I wondered what you were talking about until I held my ears close to the speaker and then I heard it. Not a problem for me. Thanks!!

: >) I hear the bottom end of the drips but not the crisp ticks at the upper end. However, I can see the entire frequency spectrum in my software, which allows me to identify problem events when I can’t hear them.

Exquisite. Puts me in a state of mind that would be very hard to describe.
Aleta

care to try? not now … but once you’ve come down from the high?

Are the drips at a good volume? I can mellow them out a little bit, but will only do that if necessary.

I think everything is just PERFECT! Really really wonderful to listen to

great … just what I want to hear!

Lang, I just returned from my first visit to Canaan Valley, and thanks to the good naturalists in the area, had the time of my life. It was a healing experience. And this recording takes me right back there; the life birds, the sweet songs, the fellowship with like-minded nature lovers…you have really recreated the experience for me. Thank you!

I had planned to visit Canaan Valley during my whirlwind trip, but instead drove westward to Kentucky. It’s a favorite spot, especially in the CV Wildlife Refuge, down at the end of A-Frame Road. Did you go there?

A question: did you have any trouble clicking through via my newsletter? Some just contacted me and indicated that it wasn’t working.

Click here to find out how.
wpDiscuz
33
0
Would love your thoughts, please comment.x
()
x
| Reply