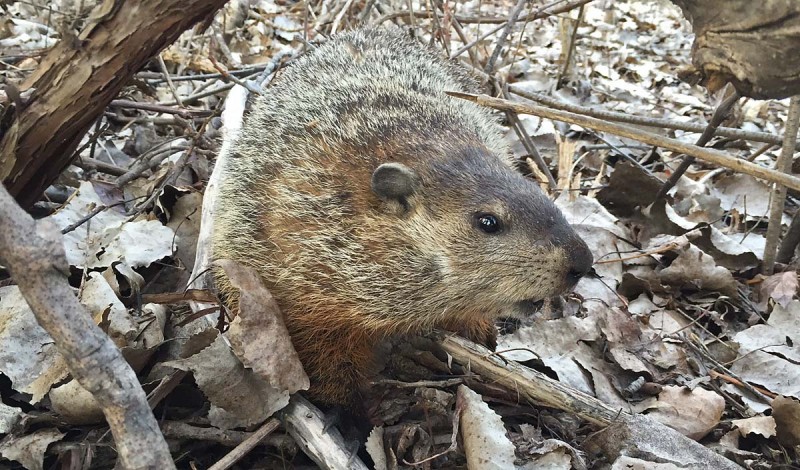 Late this afternoon I went on a nature walk near where I live. While ambling along a trail through the forest, I was startled by loud screaming, coming from a large pile of brush right next to the trail. Luckily I had my iPhone, so I started recording the screams and peered into the brush, wondering what the ruckus was all about. There I spied two groundhogs, locked together in a fight. A large one was overpowering a smaller one and the loser was crying bloody murder (I believe the underdog was doing most of the noise-making).

I was thrilled to record the encounter, but was completely surprised when the two groundhogs suddenly rushed out of the brush and on to the trail, heading right for my legs. I jumped to the side, but the biggest groundhog turned and ran after me. Luckily, it stopped after ten feet or so, turned around, and pursued the little one again. I approached the two, hoping to get another recording. Then the big one chased me again, before finally scurrying into brush on the other side of the trail.

With a little searching, I discovered the smaller groundhog cowering among the shrubs. It looked as if it was in shock, but perked up a bit on my approach. Fortunately, I was able to get a nice photograph, which I’ve featured above. He/she wasn’t bleeding, so perhaps will be okay. I’ll know for sure tomorrow when I go back to the spot to see if the poor little guy is still there.

Can you imagine that? I went for a relaxing nature walk and ended up getting chased by an angry groundhog. I’m sure glad I didn’t get bit … it might very well have been rabid! What I won’t do to get an exciting nature recording!

NOTE: See new post Raccoon Fight for comparison … if you hear these kinds of sounds at night, the sound-makers are most likely to be raccoons, not groundhogs!

Hello Lang,
This is fascinating! I had no idea woodchucks (I call them that as well, maybe a New England thing?…) could sound or be so aggressive. All the woodchucks I’ve ever encountered have been fat, happy and quiet! I speculate that the big, angry one was probably sick, rabies or something else …
Am a brand new visitor here and so glad I found this. Looking forward to following and listening!!

Susan: Glad to have you on board. I too think that big aggressive groundhog might have been rabid.

Hi Lang – Is there any particular app you recommend for recording with an iPhone? I have been using RODE but not sure if it is the best for recording nature sounds.

Hi there Larry. I’m not really up on iPhone recording, but the Rode iXY plug-in mic looks to be a very good possibility. Is that what you’re using?

Lang, I’m sorry, after reading your post, than, when listening to your recording, it brought laughter to my breath. I’m happy you didn’t get hurt.

Your story reminded me of my friend’s relaxing walk on a trail here in Florida.

He unexpectedly met up with a wild hog. He told me, he let out a scream so loud. What surprised him was that he didn’t know he could scream like a woman. Fortunately, the wild hog ran off.

Stay safe, and have a wonderful Easter.

So glad my dear friend Linda passed this onto us.
She treasures animals and we treasure her!

Be careful, they may take a chunk out of your leg!

Dang right! I had my muck boots on, but I’ll bet one could bite right through that. So when it chased me, I really did RUN, I mean seriously. I was fortunate that it quit chasing me both times, after about ten feet or so. I guess it really didn’t want a chunk of me. I do believe a groundhog can run pretty fast, at least for a short distance. But could one outrun a man? I dunno … maybe.

Thanx for that! Exciting, and a good recording, on your iPhone?
lwc

Yes, made on my iPhone. The photo too. I’m sure glad I had it along; otherwise I wouldn’t have anything but the story … a tall groundhog tale without proof!

Wow, Lang, great action! I would guess a lot of male testosterone was flowing and maybe a lovely, shy female hiding somewhere watching it all. obviously both love and hate were in the air! Funny that they went after you too. As my husband says, “It’s a red-assed world no matter who or what you are!”

Lynn: You might be right … two males vying for a female. Wish I knew the true story. The winnner was sure a grizzled-looking creature, well-worn to the extreme.

Wow! They do sound angry. The next time my neighbours fight and shout at each other, I will put this on full volume and place my speakers next to the wall I share with them. 😛

I love your accounts from the wild! I don’t get out there so much anymore so all the wonderful sounds of wildlife doing their thing makes me smile and this one was especially interesting! Not that I like groundhogs much! They do so much damage to my gardens.

Yes, we have one of those “conditional love affairs” with our groundhogs. We love to watch and enjoy them as they run about in our yard, but we cringe when they burrow under the fence and get into our garden. So far, we’ve decided to let them be … our enjoyment trumps our displeasure!

I had somewhat like this happen a few years back. While up north, I heard this loud extreme what I call “mewing”. Two porcupines were fighting to use the same tree den. You have recorded similar sounds in your tapes and cds.
Dick

Great recording, as always, I appreciate your descriptive commentary as well. Could not help but notice the nasal sounds of these adversarial whistle pigs…

Sam: You’re right, their racuous screams are nasal in quality … quite fitting for whistle pigs.

Eleanor: Well, if that was mating, I sure wouldn’t want to be a groundhog (especially a female). What I saw was intense fighting, with the bigger one completely dominating a very frightened and clearly traumatized underling. No sign at all of mounting or thrusting. The aggressor appeared old and well-scarred, with scabs and blood on its nose … what appeared to be old wounds from previous fights. I know that mating often includes lots of aggression, but my impression here was an out-and-out fight. That said, I was rather surprised that the smaller one did seem to have any bleeding… Read more »

I never know what I’ll hear/see on your blog, Lang. Always a delight.
Thanks,
Nancy

Great stuff. Woodchucks (that’s what I call ’em) are full of surprises. Once I spied one about fifteen feet up a dogwood tree, gorging on the fruits. I have yet to see one chucking wood.

Fascinating. Thank you for sharing and it was fun to hear your voice. I have heard this sound in the night and wondered what it was.

Since groundhogs are not active at night (at least I don’t think they are), what you heard was most probably Raccoons fighting … a very common occurrence. Maybe I will publish a blog post featuring raccoon fighting sounds for comparison.

File under incredible but true! I have had so many unexpected and dramatic wildlife encounters over the years that I dare not go forth without my camcorder and binoculars. Thank you so much.

Norm: I actually left my gear behind on purpose, so I could take a relaxing walk without toting a bunch of equipment. Luckily, I had my iPhone. Otherwise I’d not have gotten the recording or the photo. Thank you Steve Jobs!

I see my avatar did not appear as requested. This is the second test with a link to the registered email address. Sorry! Not for trying. . . .

Works now … thanks so much!

Click here to find out how.
wpDiscuz
31
0
Would love your thoughts, please comment.x
()
x
| Reply