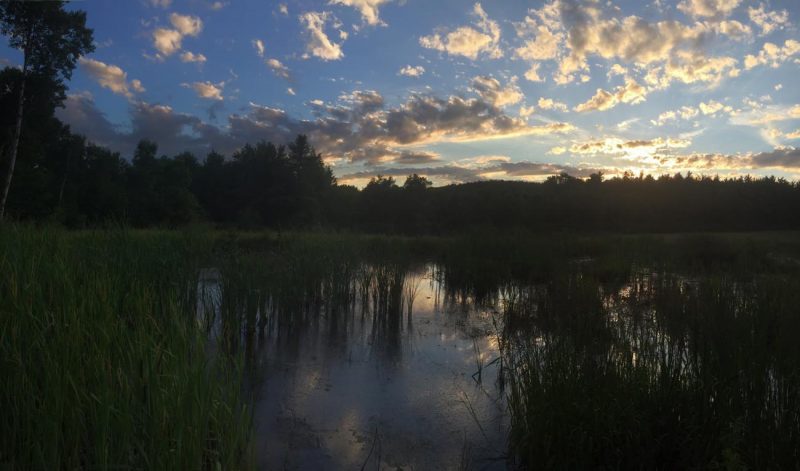 Bullfrogs and Green Frogs sounding off from a marsh at midnight. 12:00am, 23 June 2016, Finger Lakes National Forest near Trumansburg, New York. © Lang Elliott.

A few nights ago, I camped next to a marsh in nearby Finger Lakes National Forest. The object was to get some sleep so that I could rise at 4am and enjoy the birds, singing at dawn. As it turned out, I stayed awake well into the wee hours of the morning, fascinated by the never-ending chorus of Bullfrogs and Green Frogs

The two species are easy to recognize. Green Frogs give a single throaty gunk! or else several gunks! delivered in rapid succession: gunk!-gunk!-gunk! Their calls seem more-or-less random, with no discernable tendency of different individuals to call back-and-forth or in unison.

In contrast, Bullfrogs produce a sonorous vroom .. vroom .. vroom, sometimes stuttering their notes a bit. Furthermore, Bullfrogs often respond to one another’s calling. When one begins, another nearby may join-in, alternating its calls with the first. This produces a interesting “pumping” effect, most evident when two males sing on somewhat different pitches: vroom-vrum-vroom-vrum-vroom-vrum … At times, three or four males may chorus together, all falling silent when their outburst ends.

What captivates me most is the way the sounds of the two species complement one another. The bullfrogs call in spurts and fall silent in between. The Green Frogs never stop, their random gunks! piercing the silence that falls between the bullfrog vrooms! The resulting soundscape is quite unique among frogs and toads, and is of widespread occurrence throughout much of the East.

After several hours of drifting in and out of sleep, I finally slipped into a fuzzy-froggy dreamstate, only to be jolted from my dream by my iPhone, signaling me that it was 4am and time to get on my feet and go to work. Geez … for the nature recordist, work never seems to end. When on earth am I finally going to get a good night’s rest?

It is great to read about frogs like them very much .you have to make your own pond to get them in your house . so I made wo ponds to attract them and Pondpro2000 is here to care my pond in an eco-friendly manner to protect the life inside or outside the pond.

Hi Lang, I enjoyed the amphibian symphony. Which pond in the national forest is this? Thanks! It’s one place around here that we haven’t hiked so you have inspired us.

Does your iPhone have a snooze button? Lol!

Yes, it does, but if I use that I’ll miss experiencing and recording the soundscape at the break of dawn.

Tapped on the photo of the frog pond. Was there supposed to be sound ? Because I didn’t get any only a beautiful picture, dear Lang.

Aimee: There is no sound when you tap on the pic, just a larger version of the pic. But there should be an audio player visible just below the photo. Are you seeing one? Some folks have complained that they don’t and I haven’t been able to figure out why.

6/29/16 11:59pm, Nope. No sound bar. Just photo. Sorry. I’m trying everything. Maybe a refresh will do it. Oh, well, enjoying your capture of bird songs and Bull Frogs.
Night sounds; so calming thnx.

Maybe you need to repost it. Still no luck.6/30/
I receiving this on an iPad. Maybe it only works on a desk top.

Here’s what you should see

Yes that’s what I see. I’ll try what u said to do.thnx.

hahaha – my poor ears sometimes seem to hear backwards: a few measures of some of those greens sounded like a diesel freight in the distance. no wonder sleep’s hard with this combo.

i keep sharing you so your audience grows and grows. froggies rock ♥

Greenbird … thanks for the sharing; I certainly would like my audience to grow!

Green frogs being the loose string section, and bullfrogs the jug section of a very interesting wildlife band.

i could listen to frogs forever. i made many recordings at the river but never realized the “gunks” were green frogs. thought it was just one of the bullfrog sounds.

A lot of folks confuse Green Frogs with Bullfrogs. In the southern states, there’s a frog called the Pig Frog that makes low grunts. Many folks think they are Bullfrogs. At some point in the future, I’ll have to profile the Pig Frog and include recordings.

Lang … for the past 3 years (spring/summer) our shoreline here in a narrow creek along Lake Sunapee has been totally silent of bull and green frogs. I have lived here for over 30 years and this has never happened before. Was of great concern to me. Our local protective society took note of it but there seemed to be no solution. Just a big shrug as to the silence … My own speculation via a little research (and I am not a scientist, this is just a guess) was that it might have had something to do with heavy,… Read more »

I’ve had them disappear at certain local ponds and then recover through the years. My guess was disease and/or cold winters, knocking back populations. Perhaps … and hopefully … these are natural cycles and not the result of climate change, etc. I’d sure hate to see the day (night) when these guys are no longer with us.

I lived in a small cabin on a large beaver pond for 6 years. Summer nights were magical there, hard to stay asleep! Thanks for this memory.

You’re welcome Rita. Did you have bullfrogs and green frogs in your pond?

Yes, and Mackeral Frogs too along with Herons, Bittern, Loons, Geese, and various Duck species. It was wildlife crazy there this time of year!

Holy mackerel Andy, you ever heard of a pickerel frog? Sapphire’s never heard of any frog with a name like that! I’se regusted at the thought of it.

yep … gray treefrogs. Sounds like you were somewhere in the East.

Northern Vermont, not far from you.

Better to hear nature for a guy like you.

Hot! And not so easy to sleep next to.

Ah well, sleep is highly over-rated. I’d much rather listen to that. Wonderful recording–thanks for sharing

I guess you’re right … sleep is over-rated … so to the heck with it!