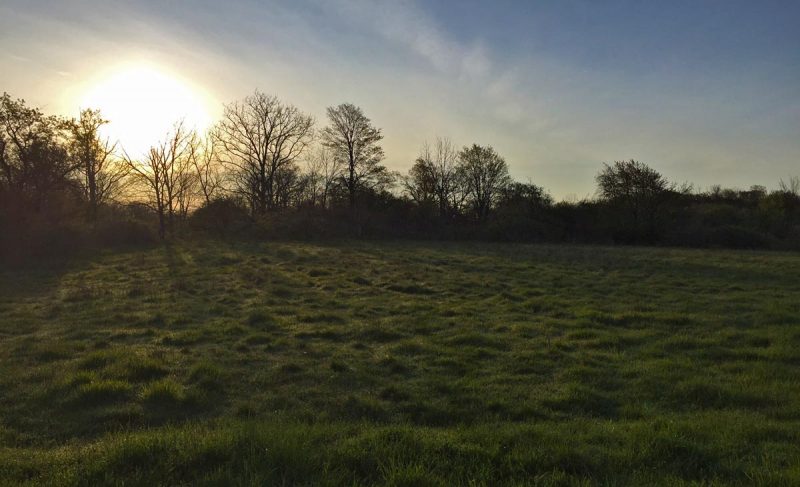 Several Bobolinks singing from a cluster of shrubs at the edge of a meadow. 5:30am, 12 May 2016. Finger Lakes National Forest near Trumansburg, New York. © Lang Elliott. This is a 3D binaural recording; please wear headphones!

On this beautiful spring day, I have just one thing to say … I am so incredibly fortunate to live in an area where I can enjoy the bubbling “song-fantasias” of Bobolinks, ecstatic voices from another world! They seem a gift from heaven, a unique jewel among our native birds. 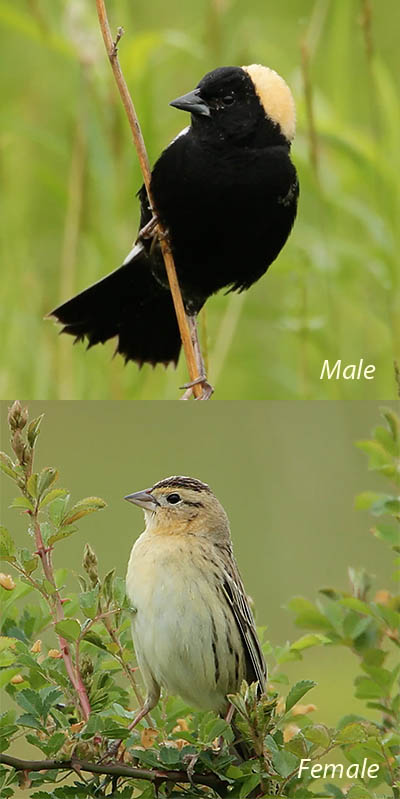 Rising early, I met up with friends Beth Bannister and Ruth Yarrow. We headed to a large meadow in nearby Finger Lakes National Forest, in hopes of recording a Bobolink or two (they have just returned to upstate New York, having flown all the way from central South America!). We were not disappointed! Walking into the meadow at first light, we heard several raising a ruckus in a patch of shrubs and quickly headed in their direction.

Amazingly, we found four males perched near one another, spouting songs like a fountain spraying water upwards and outwards, as if partaking in a festive reunion (possibly they’re still reveling in the comradery of migration, though probably has something to do with territoriality and aggression). Whatever the cause and purpose, we relished this remarkable vocal performance and I got one of my most exciting Bobolink recordings ever.

Although I’ve been busy with office chores most of today, I can imagine them in the sunny meadow, chasing one another about while singing in flight, as each male attempts to consolidate his territory in anticipation of the arrival of females. Arthur Allen, one of the founders of the Cornell Lab of Ornithology, penned this fun description of their antics and songs:

And now we come to an open field with lush timothy and clover well-started, though the daisies and hawkweed are not yet in full bloom. Floating over the green meadow, chasing one another about, are several blackbirds with conspicuous white on their upper-parts. They are Bobolinks, and their bubbling, banjo-like songs greet our ears with the exuberance of college boys. One note follows the other with increasing rapidity, until each bird sounds like a whole orchestra, and repeats its name under a jumble of musical notes.

F. Schuyler Mathews described the Bobolinks song as “a mad, wreckless song-fantasia … an outbreak of pentup, irrepressable glee.” Contemporary birders often compare the song to the sounds made by R2D2 in Star Wars. Someone told me that the Bobolink’s song provided the inspiration for the robot’s vocabulary, but I’m not sure if that is actually true. Do any of you know for sure? 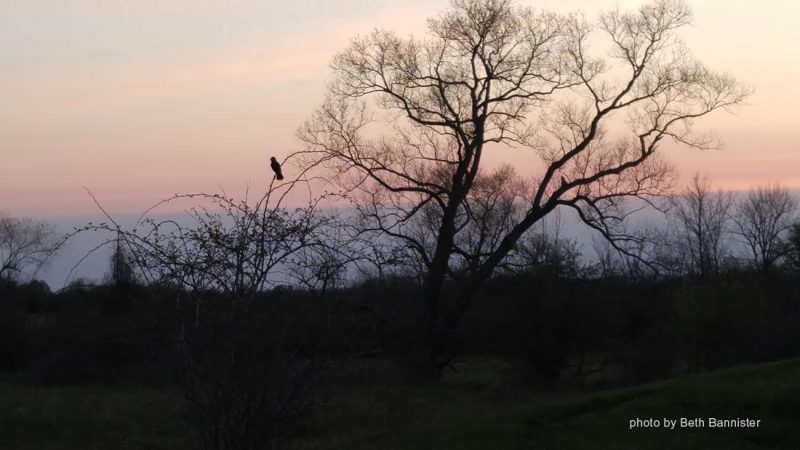 Bobolink populations in the Northeast have decreased over the last fifty years, probably due to loss of suitable breeding habitat and/or premature cutting of hay. The species used to be hunted large scale in the southern states, when flocks converged upon rice fields during migration. There are currently a number of threats on their wintering grounds in the pampas of Argentina, Paraguay and Bolivia … including habitat destruction, hunting, the pet trade, use of pesticides, and the like. NOTE: If you’re interested in helping Bobolinks in the Northeast, consider supporting the Bobolink Project.

So far, I have not noticed any population decreases here in upstate New York, but it would be a sad day indeed to witness the disappearance of their songs from the lush meadows found only a short distance from where I live. Every year, with great joy, I relish the first bubbles that erupt from the Bobolink’s throat. Pop the cork and drink with gusto, there is still much to celebrate.

their songs give me
goosebumps!!

Goosebumps? Are you sure they’re not bobolibumps?

What a fun song! Pure joy on their part.

My neighbor has one of the only hayfields around that don’t get cut until after the bobolinks are done breeding. I was up there this afternoon and the songs were wonderful!

Eliza: I’m so glad to hear their are good populations in your area!

I always think the bobolink sounds like the droid R2D2 from Star Wars fame!

We don’t know what the long term fate of our local Farm Meadow bobolinks will be, with the end of haycropping and turkey farming coming in to replace haying on other half of the shared meadow. Bobs have a fairly high tolerance for human disturbance, but domestic turkeys? Perhaps our bobolinks will just carry on. A very fine recording and admirable work all around. Filtered audio here this morning not so good with white noise from planes, trains, and automobiles; you are very fortunate to live in a quiet place with just the sounds of the wind and the birds… Read more »

Lovely … in spite of the background noise. Quite a number of birds all going at once!

I like the collective noun, ‘A Fountain of Bobolinks’. I checked my local Bobolink field a couple of days ago and there was no sign of them yet. With reference to the male’s yellow head, my wife noted that it looks like their grannies knitted a hat for them!

Peter: I’ll bet they are already back. I was surprised at how many appeared all at once. One day there were no bobolinks, and the next day they were bubbling in all the meadows, as if they arrived on the same bus.

Senen: I look forward to hearing your bobolink composition!

My first thought was R2D2 in feathers. Wonderful.

Glorious! Thanks so much. Also, to all NE readers, please support the Bobolink Project (http://www.bobolinkproject.com) which pays farmers to delay cutting hay fields. It has been very successful and needs our support to continue and expand.

Yes … a very worthy cause!

That is so important! Thanks for the link!

John: I’ve added the Bobolink Project link to the main body of text. Check it out!

Great job, bobolinks! Great job, Lang! Recently read a great book about the origins of singing in birds: “Where Song Began,” by Australian ornithologist Tim Low. Low employs a wide range of molecular, morphological, and musical evidence to make his case that songbirds and perhaps even song itself evolved in Australia first, then spread around the world. Do I detect a faint Aussie accent in the singing of the bobolink? And maybe also touches of Spanish and Portuguese?

Ed: Australian origins? Wouldn’t surprise me at all, especially after hearing so many brilliant melodies in the outback. I’ll have to check out that book:

Good on ya, mate!

I remember years ago when I was young walking through a field here in Ontario and it was like and choir singing. I was lucky enough to be with a older person who told me it was the Bobolinks singing. It truly was surround sound. thanks for this.

A field of bobolinks … surround sound at its best, and certainly one of nature’s most remarkable choirs.

so joyous. your word “fountain” is perfect because their song just seems to burble up and over. i don’t hear them as banjo like, as allen’s description says. i like your invitation to pop the cork and imbibe this lovely bubble nectar. Another absolutely wonderful recording.

I like your use of the word “burble,” which (I just now learned) means “a continuous murmuring sound.” And that they do when a group of males is singing all together like in my recording … listen as they bubble, burble, and bobolinkle up over everything!

Bobolinks are among my most favorite of all avian singers! Here in NE Ohio, I’ve noticed that each location has its own unique Bobolink song. There’s a melodic pattern of a few pitches that’s clear and slow enough for mere humans to identify, and these patterns are clearly different at different parks and preserves in the area. The Bobolinks at each location sing “their” special song from the day they return, Thank you for posting this wonderful recording of your Bobolinks!

Yes, the Birds of North America monograph for the Bobolink says “Males in a population typically share their repertoire of 2 song types. In a northern Michigan population, 9 song dialects are found in a 90 square kilometer area; dialects correspond to large, disjunct patches of hay fields …” What’s great Lisa, is that you figured it out on your own!

I, too, am incredibly fortunate that *you* live where these amazing birds can be appreciated, and shared with us by proxy. In SE PA Cornell map says I am in the low 0-2% zone of his travels, so this is quite a treat for me. Carnaval! Cirque des oiseaux! Fantasia, indeed.

Thanks so much. This is the perfect dessert course for after dinner. :O) Just sad we didn’t see any migrating through SE TX this year. They are lovely creatures!

mmmm … dessert … yes, they make a terrifically yummy dessert, especially for the ears.

p.s. it appears that hardly anybody received my newsletter for Catbird Singing at the Break of Day (my last post). So I’m wondering if you received it?

Click here to find out how.
wpDiscuz
34
0
Would love your thoughts, please comment.x
()
x
| Reply