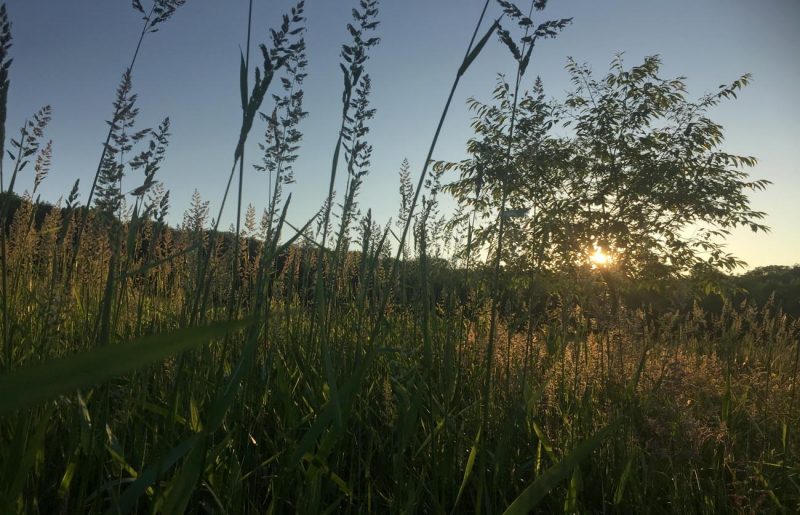 Field Sparrow Dawn Song with American Toads trilling from nearby pond. 4:40am, 22 May 2009, recorded near Van Etten, New York. © Lang Elliott. Please play at a low volume to simulate a natural listening experience. 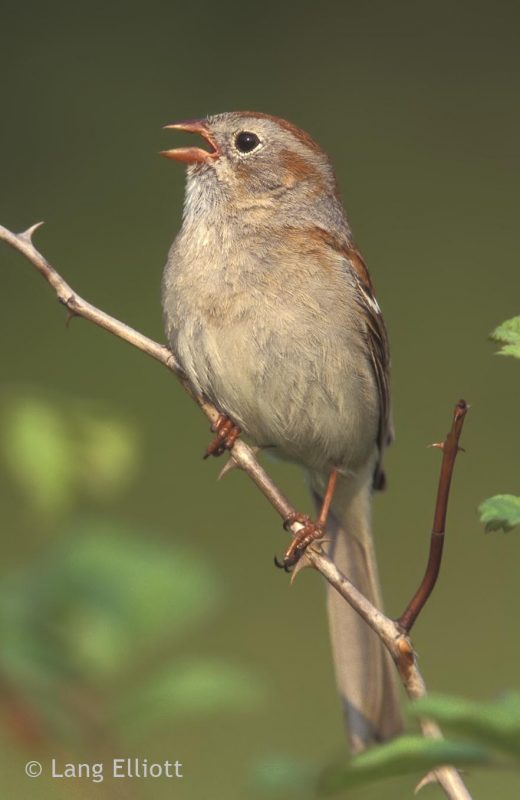 This season I’ve tried time and again to get a super-pleasing portrait of a Field Sparrow singing its exquisite dawn song. But try as I might, I was unable to beat the portrait I captured on May 22, way back in 2009.

Listening to the recording, imagine that you’re in the meadow at the crack of dawn, crouched about thirty feet from a shrubby sapling that provides a perch for the Field Sparrow. Not far away is a small farm pond with dense cattails, home to several American Toads that are still sounding off, though late in their breeding season. Other birds twitter in the distance. What an enormously pleasurable listening experience!

How does one recognize the Field Sparrow’s dawn song? Well, first it is important to become familiar with the typical daytime song pattern, which has been described as a series of sweet, slurred whistles that speed up into a trill. Below are some typical songs of the same male in the featured recording, but singing an hour later at 5:43am:

The dawn song pattern, which is sung at first light for ten or fifteen minutes, is fairly easy to recognize because it is divided into three (sometimes four) clear sections and is usually accompanied by a lot of high-pitched chipping. Listen for the distinct “middle section” of the dawn song. Here is a clean-and-close example, which I recorded just a couple of weeks ago:

The very first Field Sparrow dawn song that I ever recorded were captured in 1992, during a visit to Teddy Roosevelt National Park in western North Dakota. I rose before dawn and walked out into a dry flat of grass, sagebrush and shrubs. I soon homed-in on an excited song with lots of chipping. I thought it was a new species for me … most likely some western sparrow with which I was unfamiliar:

Listening carefully, however, I noticed certain of the note-sequences that had the quality of the Field Sparrow songs I was used to hearing back home in New York. So I guessed it was a Field Sparrow singing a special song, probably a “dawn song”. Luckily, as light came upon the flat, I was finally able to catch sight of the singer and make a positive identification.

I love it when birds sing special dawn or twilight songs. Many warblers do this as do many flycatchers and some of our sparrows. Over the last 25 years I have documented almost all of these, gathering both parabolic closeup recordings as well as more artful and immersive soundscapes where the dawn song is rendered as part of the whole.

When it comes to Field Sparrow dawn song, it’s hard to beat my featured recording from 2009. I think the toad trills are what makes it a winner … those sweet trills balance the soundscape, adding a low, droning element to what otherwise would be dominated by the high-pitched twittering of the birds. Thank goodness for those warty toads of the muck and grime, whose dreamy trills anchor and soften the Field Sparrow’s lofty and sprightly melody.

Something so ethereally touching in this recording with those frogs background…Awesome atmoshphere…..

Leif: I think the frogs really make this recording work, by grounding it with some low-pitched ambience. The Field Sparrow’s song is beautiful when heard in context and not too loudly. That said, it would still be my inclination to lower the loudness of the sparrow’s song a bit, still keeping it clear and present.

It could be surely so, but that sounds still so balanced, because one can sense how powerful the vocalization of the frogs in the background is. I think they are perfectly coupled together now. I feel the bird is singing in a sort of mighty frog cathedral…

Elizabeth & I love the two American Toad trills in the background! It sounds like some kind of orchestrated instrumental accompaniance. Add in a robin, chipping sparrow & an American Woodcock & you have a wonderful Field Sparrow Concerto!

I can hear it now,Lang. Thank you very much. Thank you for fixing that. Also, I can hear the Spring Peepers in background. Nice..7/17/16

Super nice. The understated toad calls add so much to this.

Just perfect, I love the soft delicate mix of sounds Got some really interesting sounds of thunder that was high overhead recently. Hardly a day goes by that I don’t attempt to record something. My wife recently got me your book on insect sounds, what impressive images, looking forward to listening to the CD. I’m always in awe of your recordings.

Wow, that is fascinating.

this is just exquisite–tickles my ear. i love the delicacy of the bird song complemented by the toad. just perfect.

Fascinating and soothing! Thanks for seeking and getting these recordings of Field Sparrows. I never knew they had a “dawn song” and that it has an open, rising sort of quality so appropriate to the event they herald. I also felt the toady trillers’ background of a placid, almost apathetic, sound blanket contrasted well with the Sparrow’s aspiring song, and I appreciated your musings on the combination. I have been given four “warty” little crises in my family’s life within the past 2 weeks, and your thoughts on seeing the parts of a soundscape in the context of the whole… Read more »

Oh I always learn a lot! I did not realize the Songs could be so different. I only know the ping-pong sound . The Dakota birdsong in your recording from 1992 had a richness that I associate with Song Sparrow. How did you used to store the recordings way back in 1992?

In 1992 I had just started recording to DAT (Digital Audio Tape).

Absolutely beautiful. Thank you so much do this.

I gotta say–I love that you get up so early. Everyone here teases me endlessly about being out there waiting for the sunrise every day. Can’t help myself–it is truly the BEST time of day!
This was a very relaxing recording!

It is absolutely the BEST and most MAGICAL time of the day.