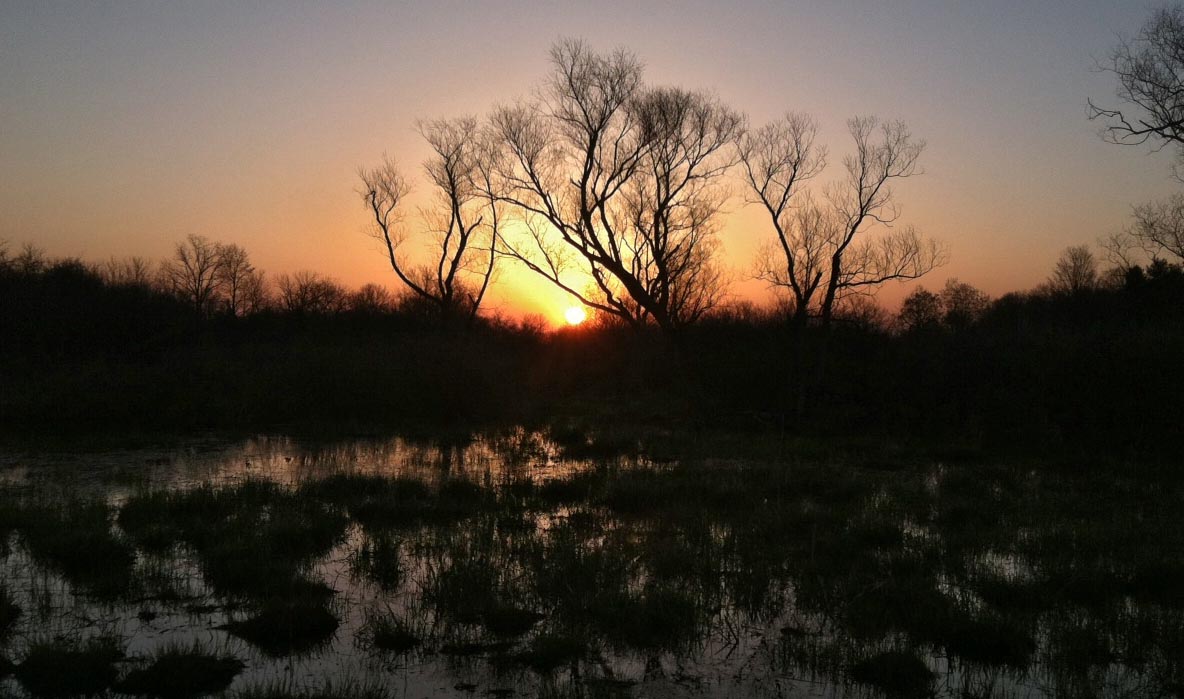 This morning I visited Willow Pond, a favorite spot of mine in the nearby Finger Lakes National Forest. It was cool and foggy. There was not much activity … a few male Red-winged Blackbirds setting up territories, a Song Sparrow or two singing from shrubbery, some woodpeckers drumming in the distance … that’s about it. But in my mind’s eye (or rather “ear”), I could hear the soundscape of the future, the rich variety of sounds that would greet the dawn about a month from now.

Returning to my studio, I dredged up a lively dawn chorus I captured at Willow Pond on the 28th of April in 2013. I’ve decided to feature that recording today, a reminder of things to come, of the rapid expansion of the soundscape that will occur as birds return to their breeding grounds and begin their reproductive cycle. This is not a mellow, put-you-to-sleep recording. It is engaging, with a rich variety of species sounding off. Here is a list of what I hear:

Well … have I missed any species? And what do you think of this recording? Interesting? Uplifting? Or just ho-hum? I rather like it myself!

i somehow missed this one until now. very rich and lively,vibrant. beautiful. definitely not for the soothing mix but would love to see it on another one. love the peepers

Add this one to your Gentle bird soundscape. AAAH!

Just what you need to get going in the morning!

Love this. Hope it makes it to an album. I have always loved the sound of red winged blackbird songs mixed with American toads

Amazing! What a delight! Thanks

Do you have special recording equipment for your sounds? I have been thinking of buying a microphone for one of my cameras but have not done so yet. That being said, I am surprised by the quality of sound that my iPhone picks up.

For video work where I don’t have a helper, I’m using an Audio Technica stereo shotgun, the BP4029.

Looks interesting and professional. Unfortunately it is way out of my price range unless I give up retirement. (I won’t.)

Have you special recording equipment? I have been wanting a microphone to hook up to one of my cameras but have not made a purchase yet. That being said, I am surprised by what my iPhone can pick up.

Very energizing. I lived in the Ithaca area for some time and this connects me with beloved territory.

Love your audio and video samples. They are complete sensory experiences! With quality headphones it seems as if we’re there with you. Can’t wait for the Warbler push that’s headed this way!

I love this beautiful cacophony! Leave it to the robins and the peepers to make the most noise.

Lynn: I was actually a bit surprised at all the robin activity at the pond. I hadn’t noticed robins there in the days preceding. As for the peepers, I actually had to tone them down a bit for better listening. There was even one peeper that I eliminated entirely from the recording. He was very close to the mike. Luckily, he only peeped five or six times, so I was able to wrangle him out of there without much difficulty (modern editing technology is amazing in this respect).

Thank you, as always, Lang! All your work is such a gift.

And thank you Marilyn!

I love this – and so does my parakeet! She was completely quiet before the soundscape began, now she’s joining right in. Thank you from both of us.

Oh my! What a sweet symphony for my soul! Absolutely delightful! Thank you!!

It sounds like some modern music concerts I have been to. Now I know where they get their inspiration!

Karen: Are you referring to pleasant music, or do you mean music of the loud and obnoxious type?

I so enjoy all of your recent post!
Tom

What an absolutely glorious, joyful way to begin any day! Thank you most heartily for the ear candy; it was delicious!

This is lovely! It feels like just the celebration called for, as my husband and I just signed about 25 of our acres into a conservancy easement. Now all the work of restoration will continue on into the future and beyond, giving sounds like this to the generations to come. Thanks for participating so heartily in our celebration…even if unknowingly!

Karen: Congrats on protecting the 25 acres!

The looping soundtrack to this post has been a calming salvation for my day. Thank you for this gift, Lang! <3

Absolutely symphonic, and as uplifting as a visit to a much loved music Hall ….only the seat is not ticketed, and the smells are missing.

I can easily imagine the smells … the odor of the marshy muck beneath my feet. Of course, I was actually there. Maybe I should set this soundscape to video … a Willow Pond immersion, so to be speak, with plenty of views, both landscape and closeups.

Yes, set this soundtrack to video of Willow Pond! Makes me want to return to Ithaca where my grandparents lived when I was a young girl. We used to drive from Rochester NY to Ithaca to visit them in the Fall and my Dad would pull over at cornfields if they were filled with geese so we could listen and watch…. The one dawn picture you posted of Willow Pond looks beautiful but also humble and ordinary. And it makes me realize how much more aware I have become of the sacredness of bird calls and natural places since seeing… Read more »

Susan: You’re right, Willow Pond is rather ordinary in many respects, yet chock-full of life, as you hear. Part of my mission is to reveal the wonder and beauty of nature in the commonplace, in one’s own backyard (or places nearby). You don’t have to travel far to touch the miracle.

Thanks so much…I look forward to these sounds in a few weeks, in NH.

Do all woodpecker species distinctive drumming in terms of speed, or regular vs irregular spacing?

Terry: Identification of woodpecker drums can be very confusing. The Yellow-bellied Sapsucker’s is distinctive because it is uneven, sort of like morse code. Most of the other species in my neck of the woods have even-paced drums, excepting the Pileated Woodpecker, which trails off noticeably at the end. I was able to ID the flicker drums because he called occasionally, his laugh-like outburst being quite distinctive. Normally, I’d just be doing some “educated” guessing when it comes to the drums of flicker, red-bellied, hairy and downy, hoping to hear a call for a more positive ID.

Thanks so much for this beautiful recording, Lang! So lovely to listen to while I work here at my desk. 🙂

Mourning Dove I think at 4:27. Nice that the recording is looped and a terrific spatially dimensional soundstage (listening with headphones).

Norm: Yes, I noticed the Mourning Dove mself, but forgot to include it. I’ll add it to the list.

I think a rooster crows from a great distance at 1:03 and 1:35. What the heck, it is a bird with wild ancestry. Robin attacks microphones at 2:13.

I’m not sure what those robins were so excited about. And yes, I do very barely hear that rooster crow (though I won’t be adding it to the list).

BTW, I record with a binaural microphone setup. That’s why it sounds so spatial over headphones

” I record with a binaural microphone setup. That’s why it sounds so spatial over headphones.”

How does this kit hold up in wind? I am resigned to bulky fur covered blimps (x2 – stereo). It seems to blow here four out of five days.

Thanks! I will shut up, now.

Sally: at about what time in the recording do you hear it?

I’ll try to note the exact minute and second (later: I’m at work and have been playing for too long as it is!)

I take it back … can’t find it again; it was way distant and I was probably confusing it with part of somebody else’s song.

I could listen to this all day. Thank you.

I just set it to loop, so now you can listen-away-allday!

Love it. Listening to it while studying the “Real Costs of Energy”.
Thanks

Micki: I Hope it helps your studying. I’ll set it to loop, so that you can listen for a long, long time.

I just love this so much! Thank you!

How can that be .. nothing is “perfect”… although I’ll gladly accept “near perfect”!

Click here to find out how.
wpDiscuz
60
0
Would love your thoughts, please comment.x
()
x
| Reply