Just for fun, I’ve been exploring my Coqui recordings from my trip to Puerto Rico in March of 2013 (I can’t help but wonder how things have changed as a result of Hurricane Maria). As many of you already know, the Puerto Rican or Common Coqui (Eleutherodactylus coqui) is a small tropical frog that is widespread throughout the island (along with a handful of other species in the genus), and that has a very recognizable breeding call that rises in pitch and sounds like a whistled CO-KEE! 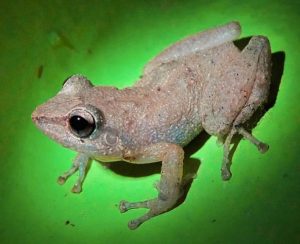 My friend Bob McGuire accompanied me on the trip and we spent the first night in a birder’s lodge along the south boundary of El Yunque National Forest, which is now closed due to hurricane damage. I had hoped to record right around the lodge, but when dusk arrived the chorus was so overwhelming that I grabbed my gear, walked up a paved road into the forest, and then hiked a rugged foot-trail that eventually led me to the top of the mountain. As I reached the higher altitudes in the middle of the night, the chorus began to thin-out and in the wee hours of the morning I captured what I consider to be the “jewels” of our trip … binaural soundscapes that pleased my ear and drew me into a magical, transformative listening experience. 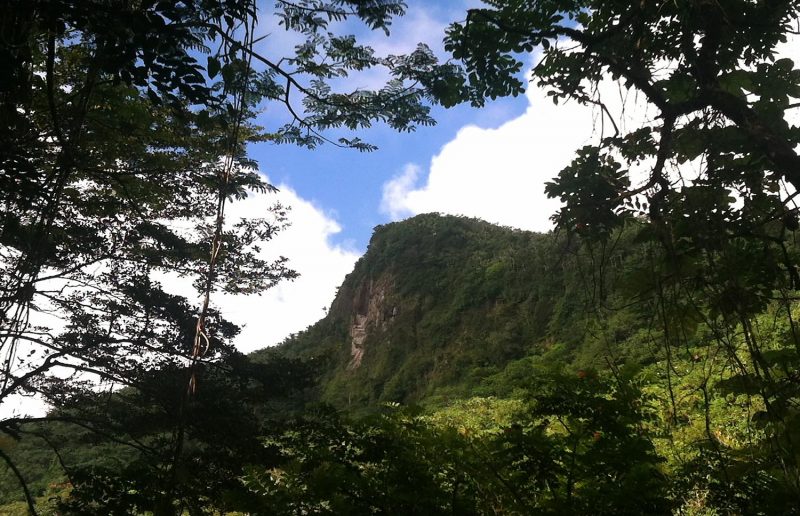 Below are several of my favorite soundscapes from that special night on the mountain, chosen for their easy-listening and mesmerizing qualities. I trust that you will enjoy them. Please don’t play them too loudly, and be aware that these are spacious binaural 3D soundscapes, so listen using headphones if at all possible:

Owl Visitation – This recording features perhaps two different species of Coqui frogs, along with the soft trills of a Puerto Rican Screech Owl.

Tinkler Chorus – One of my favorites that includes the musical, tinkling notes of what I presume to be a different species of Coqui. If anybody knows which species, please let me know!

Forest Stream – This relaxing pre-dawn chorus was recorded next to a small stream and includes splats caused by drip from the canopy hitting leaves on the ground.

Classic Coqui – Recorded in the middle of the night, this laid-back chorus features the classic CO-KEE calls of several Common Coquis Eleutherodactylus coqui. It is certainly more engaging than the three recordings featured above and I’ve included it here so that you have a solid example of the classic calls. 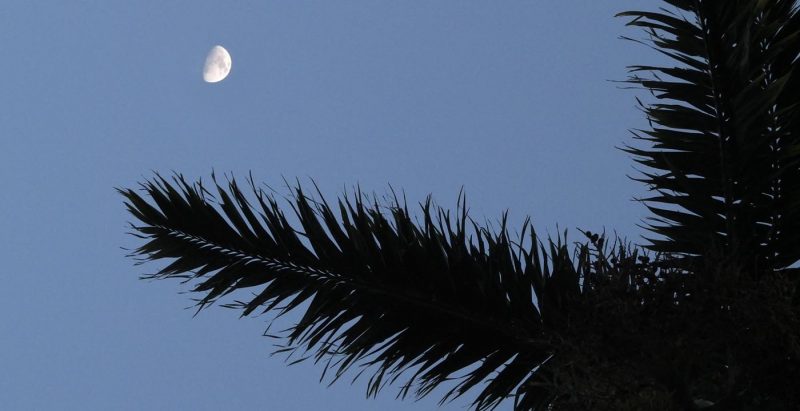 So, there you have it … Coqui Magic Nightscapes, gathered by yours truly in the dark of the night, high in El Yunque National Forest in Puerto Rico in March of 2013. Let me know what you think of them. Do they transport you into wild nature and hypnotize you with their soothing melodies, or do they send you running in the opposite direction, cursing the onslaught of sound (not unreasonable if you live in Hawaii where they have become a pest because of their loud choruses).

The sound is sublime. Mesmerizing. Nature at its most wonderful.
I enjoy it but of course I am only
listening to it here. If I had to heard it day in and out “forever” without a break I might not love it plus if it drowned out other nature sounds that might make me end up longing they’d pipe down or give it break.

Thank you for these. What rich soundscapes! Really, really nice music to my ears. I had such a nice time down there a few weeks after your trip: https://www.youtube.com/watch?v=zrYCY6_Fv-s&t=71s

Chris: Yes, I remember speaking with you about that. Nice videos!

Yes, I just read that today. Terrible news. Attached is a photo I pulled off the internet.

So wonderful to hear this, I can imagine the hurricane had a heavy impact on all the life forms there. So sad that human caused climate change and resulting more volatile weather results in damage to creatures that did nothing to cause this devastation.

I have no idea what the hurricane did to El Yunque, but I wouldn’t be surprised if various roads were damaged and maybe some landslides here an there covering trails, etc. Overall, though, I imagine the mountain forest ecosystem probably has suffered little long-term damage. It’s the people ecosystem that most likely will take the longest time to recover (but I could be wrong).

Thank you. have emailed this to various relatives and friends. Each spring I listen for the local spring peepers, now a notice of the coming spring weather, especially since the Canadian geese no longer are skeins of migration like a hiaku poetry in the sky

Pat: I’m still hearing some Spring Peeper activity … the “rain calls” they give from trees and shrubs in early autumn. But it won’t be long (five months?) before we once again hear the massive spring choruses here in the Northeast. Last spring I was traveling out West and really missed hearing the peepers and wood frogs chorusing after the first warm spring rains.

Click here to find out how.
wpDiscuz
11
0
Would love your thoughts, please comment.x
()
x
| Reply