Bugling of the Elk 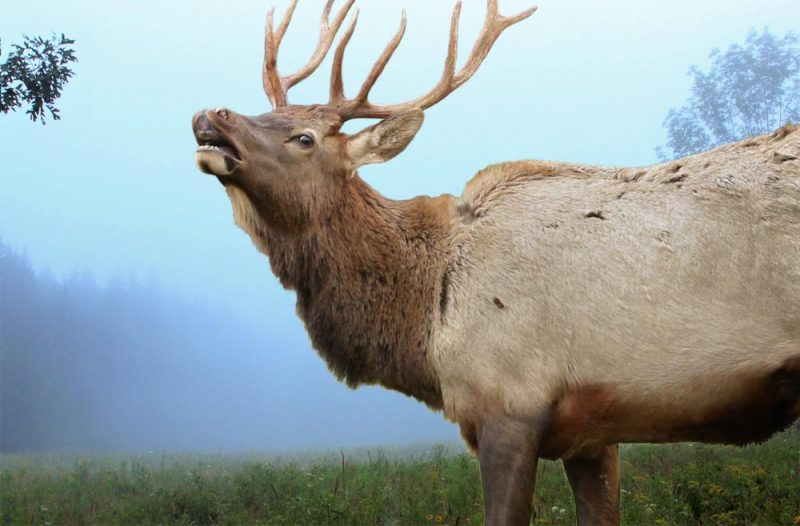 Elk calling and bugling at first light in meadow near Benezette, Pennsylvania (several quiet intervals have been removed). 6am, 13 October 2013. © Lang Elliott.

In mid-October of 2013, I went on an expedition with friends to witness the bugling of Elk (Cervus canadensis) in a free-ranging herd near Benezette, Pennsylvania. Although we arrived at the tail end of the rutting season, we were not disappointed.

Elk (also called Wapiti) once roamed freely across Pennsylvania, but early settlers gradually drove them out and by 1867 they were extirpated from the state. In 1913, the Pennsylvania Game Commission began a reintroduction program and now there are healthy populations at a number of locations, with a total of around one thousand individuals statewide.

The herd near Benezette is a tourist magnet. Thousands of people converge on the area in late September and early October to marvel at the mating behavior and learn about what they’re seeing and hearing at the Elk Country Visitor Center. We arrived late in the afternoon. I was disappointed at first. While there were plenty of elk to observe, there was little mating behavior and none of the males were bugling.

We found a place to camp in a patch of forest not far from the herd. There was no bugling in the evening, so we retired early, hoping for some action in the morning. Around 4am, I was awakened by distant bugles. I grabbed my soundscape mic and carefully made my way toward the herd. Soon, I emerged from the woods at the edge of a large meadow. I shined my flashlight into the field and counted about a dozen elk (actually … a dozen “pairs of eyes” reflecting light), the nearest being around a hundred feet away. I quickly set up my soundscape mic and then hunkered down next to a large tree.

Aside from occasional bugles and calls, the herd was relatively quiet for about an hour. But the situation changed rapidly during the half hour before first light. Distant males came closer and by 6am there were at least five or six males bugling in my vicinity, with other individuals (probably females) giving expressive nasal calls. The recording featured above, which I’ve edited down to around five minutes by reducing the length of quiet sections, depicts the variety bugles that occurred over a ten minute period.

If you want to just hear the exciting sections, here is a super-condensed version lasting a little over a minute:

Elk bugles are one the most haunting and captivating mammal sounds on the planet, unlike any other that I have experienced. I especially like the way they echo across the landscape, bouncing off surrounding hills and forest. How fortunate to have been able to gather such a pristine recording of this outstanding vocal event!

Please let me know what you think of my recording. Have you ever witnessed such bugling firsthand?

Heard a few cries in succession a couple mornings ago before dawn and thought it might be a bugling elk–except that the calls seemed identical and also had a “human” timbre near the end of each downward cry. Our neighborhood was roamed by what had migrated to become the Sequim, WA, Roosevelt Elk herd, before it was developed over the last 10-15 years. The herd migrates seasonally, including across Highway 101, and can be viewed–though usually without warning–in various fields and byways in our area. Thank you for these soundtracks.

Absolutely wonderful. Thank you so much.

This came at a very opportune time. I watched elk in the rut twice this fall. Once the wind totally swept the sounds away and once I could hear them. Fortunately, in the past, I have had the good fortune to be very close to bugling … such a wonderful sound!
Thank you, Lang

You’re welcome Elva. Where did you watch Elk in rut?

Thank you, Lang! This is magnificent. It reminds me of those times when a larynx is used almost as a syrinx sounds…overtones created by a combination of muscle movement and air pressure. Like human throat-singing! Any kind of beautiful sound made by air movement is a treasure, whether from animate or inanimate objects. This is a spectacular recording.

Thanks Marilyn! I’m thinking about putting together a 45sec super-condensed version where I tie a number of songs and calls together. And maybe even go further and do a little “morphing” just for the fun of it.

The way the tone escalates up the harmonic series reminds me of the harmonics of throat singing, and makes me wonder what the internal structures are….but that is the musician/engineer in me observing. Some day I’d love to be able to listen to this in person. Thanks for your wonderful recordings.

To think, that in this part of the world the bugling of Elk were among the sounds of chilly October days . . . takes me back to my work in Utah when, after most birds were gone and singing insects silenced, the haunting sounds of these quadrapeds filled the autumn landscape.

Catherine: Note to subtle trilling of a cold cricket at times in the recording. It was mid-October. Had it been warmer, the insect chorus would have been much more obvious. Of course, I’m quite happy with the way the recording turned out—crystalline clarity well beyond my expectations, and quite worth the trouble camping out in the nearby wood, probably illegally (although we didn’t see any “no camping” signs).

Certainly not the sound one would expect from such a large animal. It is , nonetheless, eerie and “haunting”……….Nice job, Lang

I would never have guessed that that is what they sounded like!

you learn something new everyday (as long as you keep your feelers out).

Exquisite: a pathway into the distant past.

a direct connection to the past!

Always a male thing. Even human males make an unusual collection of sounds often around females and it all started with creatures like this. Hah, no difference.
A musician, Hovhaness ?spelling sped up undwater whale sounds and created a fabulous symphony and these sounds were a little similar to those sounds.
Thanks Lang.

I am tempted to say something about one of our presidential candidates … but nope, I’m just not going to do it.

Yes, above all else protect your credentials, HAH!

Eons ago whales evolved to walk on land [heh heh heh] and elk were born. Or so it sounds! I think if this were somehow filtered under water I’d be stumped to distinguish the two great mammals’ voices. Fun aside though, this is wonderful stuff, mysterious — reverential.

The bugles do indeed bear a striking resemblance to whale sounds, except for the guttural parts.

So interesting. Really amazing to hear! Thanks!

The echos really augment the sound. Thanks, Lang!

That they do! The effect over headphones is quite striking … that’s why I record soundscapes using a “binaural” microphone setup.

Wow! That was so interesting. I had never even heard of the fact that elk create this bugling sound. The mystic qualities reminded me of the sound of loons, in a way, though I know they’re different of course. Thank you SO much! What a treat!

Yes, I agree … the bugles do have a mystical quality to them.

A friend of mine took her horses down to ride in the elk area a few weeks ago and recorded a brief video of an elk calling. Her horses were a bit surprised by both the elk and the sound.

that’s funny … I can imagine that a horse might go “what-the heck is that?”

We here in Mi. have a good herd, enough to hunt by permit to control the size of the herd. Also have been the middle of a meadow at nigh and dawn. Even had a bull about ten feet away on the way to drive out an intruder blood and mucus coming from nostrils, ignoring us. Dick

This is absolutely wonderful! I love the resonance and the incredibly expressive diversity of sounds!

Click here to find out how.
wpDiscuz
38
0
Would love your thoughts, please comment.x
()
x
| Reply