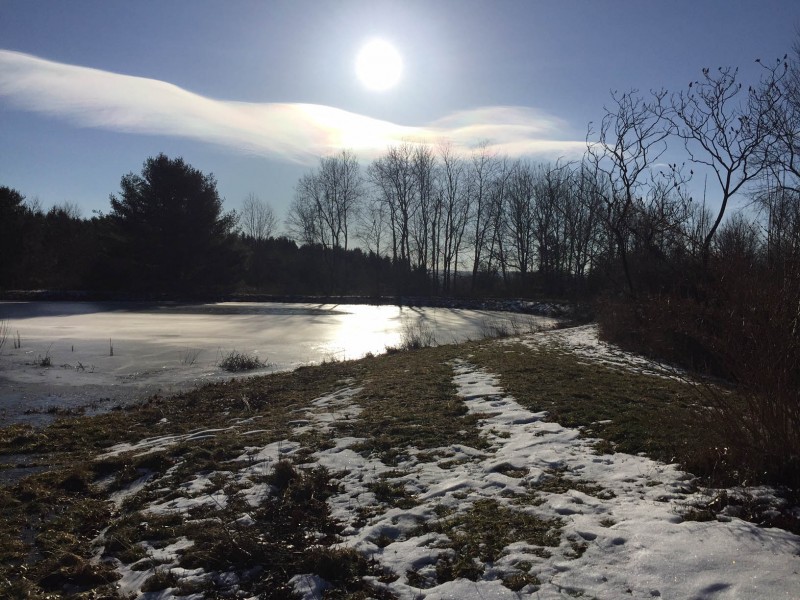 I rise at dawn on this fine winter morning and excitedly venture out into our yard to record bird sounds. It is a chill 24F, with snow patches clinging to the ground. The pond is solidly frozen over, reflecting the rising sun. Though winter still has a firm hold, there is a surprising variety of bird sounds … the optimistic voicings of birds thinking spring.

Enjoy this recording, which is an 8-minute composite of various takes made over a half-hour period. We live on the edge of town, so distant traffic noise is evident throughout, though not overwhelmingly. As you can hear, the bird calls and songs ring through loud and clear. What a exuberant celebration of sound … a joyful reminder that we have transitioned into the leading edge of spring!

Below is a list of the species I hear, roughly in order of appearance. Maybe you can add more (some of the high-pitched calls are difficult to ID with certainty).

NOTE: I recorded this soundscape with a Wildtronics Pro Mono-Stereo Parabolic Microphone, set to a 50/50 mix of stereo ambience and mono-parabolic. I used a Zoom H5 recorder. The advantage of this setup is that I am able to get a loud-and-clear parabolic rendition of whatever bird is at the focal point of the parabola, while at the same time adding a nice stereo ambience to the recording.

p.s. On a sidenote, what do you think of my use of the word “voicings” in the first paragraph? Musically-speaking, it is incorrectly used (I think), but for the vast majority of readers, it probably makes perfectly good sense. Whatya think?

Hi Lang, Could you please confirm that this recording is a raw recording done with the ” Wildtronics Pro Mono-Stereo Parabolic Microphone, set to a 50/50 mix of stereo ambience and mono-parabolic (with) a Zoom H5 recorder. ” without any post production (equalisation / masterisation) ? I am very impressed by the quality of this parabolic recording !!! Sounds clear, precise and not a lot of hiss in the background. Thanks per advance.

Stephane: This is an 8-minute composite of recordings made with the Wildtronics parabolaic mic, but they are not RAW. There’s a lot of traffic hereabouts, so I no doubt did what I could to minimize rumble. And in some instances I may have done some noise reduction. I really don’t remember, but I do know that the recordings were improved in whatever way I could improve them.

Vocalisations would be appropriate in the UK – apologies for the duplicate

Vocalisations would be appropriate n the UK

I think the word “voicings” makes sense. That way you don’t have to write out “song and calls.”

So much sonic depth. Amazing as always Lang!

It sounds amazing through no particular effort on my part, aside from aiming the parabola more at less at the center of attention. I think I got lucky. It was a good morning for bird sound. I was out this morning for awhile and didn’t hear much at all.

Glorious recording! What I am hearing at 2:52 are American Robin calls and the calls of what sound like White-throated Sparrows. I am not hearing a Carolina Wren at the point.
At 1:55 it sounds like there is a distant Pileated Woodpecker calling.
Come spring, come.

Yes, I hear the robin calls and it makes sense that there are white-throated sparrows calling. The unknown bird song is buried in the background. I barely hear it, but can see it on a sonogram.

Amazing. It sounds like a dawn chorus in spring. Nothing like this across the lake in Ontario, but I’m looking forward to it. I wouldn’t be the least bit concerned about the use of the word “voicings”. The English language is constantly evolving, (as well as being “misused”) You may just have added to the process.

I think I hear a Carolina Wren piping in at 2:50, faintly, behind the microphones.

Norman: Indeed there is a distant bird song starting at 2:52. But is it the song of a Carolina Wren or else a wren-like Tufted Titmouse? It’s a bit confusing to me, but be aware that my hearing is really not that good. Does anyone else have an opinion? Note that we do have Carolina Wrens in our yard. I heard one sing briefly that morning, but I was unable to record it.

Thanks for this, Lang! I’m starting to hear the spring vocalizations of the birds here in northern Virginia too. The woodpeckers are drumming and the titmice are calling. The renewal of spring! It truly makes a hard winter worthwhile, just to experience the magic of spring returning!

Pretty amazing progression of songs and calls. I’m picturing you with the microphone in one hand and a conductor’s baton in the other. Marvelous morning music. Thank you!

How else would Spring, beautiful Spring, have a voice?
The amazing little birds are voicing Spring to us.
I like it. I’m in SW Iowa and your recordings lift my spirits! Thank you!

Wonderful taste of exotically different spring sounds to what I am used to here in Scotland. ‘Voicings’ gets my thumbs up! Is it the Northern Cardinal at the end with that piercingly beautiful high pitched call?

Yes, that’s the Northern Cardinal at the end.

Thanks for getting up and recording these lovely sounds for us late risers to enjoy. My area close to Akron, Ohio is starting to show signs of spring with the birds sending out their Springy sounds. How’s that for a work. This is really peaceful to listen to. Thanks.

I would sorely love to head south in early March, to get a real taste of spring well before things start kicking here. When I consider that trees won’t start leafing out until early May, I realize how far away the “height of spring actually” is in these parts (upstate NY) … nearly two and half months from now.

Way, way too much automotive traffic, aircraft, and other anthropogenic noise pollution to get recordings this quiet in metrowest Boston. I think I need to go West, as they say. – N

I was fortunate not to have a jet go by. That’s what usually goofs things up around here.

Lovely, thank you, theses sounds are such a comfort, spring is near!!

I’m very grateful to know that there are people out there who appreciate this kind of thing and make efforts to share with others. Thanks!

Write on with that poetic license! I barely hear the background traffic noise. And actually in this context, on your blog, I think it’s fitting occasionally. You’ve called your work “nature near at hand.” So for the background noise, it’s like a gentle reminder that nature can be found in the backyard as well as far out in the woods. =)

This is wonderful. I just came in from our pond and just sat and listened. It is cold here in western NY, but sunny. I have two birding microphones so that I can hear the pond and wetland woods inside the house. Thank to you I have learned about the calls frogs, toads, insects. My IPAD is full of your recordings…. Thank you … Michelle

This is to Michelle. I’m wondering what microphones you use. The only practical ones are made by wind song and they have such tiny little microphones pick up mid range sounds louder than the bird sounds so that a car going by twice as loud as it should be compared to the birds.

Well, except for the woodpecker drumming, “voicing” is fine because the birds are using their vocal apparatus to make the vocalizations! Nice to hear Ithaca has a spring at last!

Hi there Gene! Yes, I agree with you from a technical standpoint, but I still think “voicings” works well when used poetically (as I have done). The main problem (from my point of view) has to do with the music theory definition of “voicing” as being “the manner in which one distributes, or spaces, notes and chords among the various instruments” or the “simultaneous vertical placement of notes in relation to each other.” I have no idea what they’re talking about and I’m sure they (those music scholars) would frown upon my use of the word in relation to bird… Read more »

One more thing… who could hear traffic over those noisy woodpeckers??? :o) – And I do believe that the Downy you were wondering about is indeed a Downy.

The cardinals really do stand out! Ours are outside the window making the same calls right now. Mr. and Mrs. Cardinal, that is… They are already pairing up here. And the males are quarreling a bit for territory. Next door we have some children that have a squeaky horn-like toy and one of our mockingbirds has managed to duplicate it very well. If I was all set up to make these recordings, I’d be recording him as it sounds so comical with him incorporating the toy sounds into that already impressive repertoire of calls… The Mockingbirds are also singing throughout… Read more »

Sara: We have some mockingbirds hereabouts, but nowhere near the numbers found in the southern states. Unfortunately, none live in our backyard; I have to venture out to special spots to view and record them.

Where do you live in the South? I imagine the resident birds are in full swing down your way. And what about Woodcock? Are they moving through yet?

I am in Southeast Texas… in a little town called Anahuac. We are close to the Anahuac National Wildlife Refuge complex and not too far from High Island, Texas. I pester you from time to time about visiting High Island in migration season. I would love it if you guys could see the Roseate Spoonbills and Herons at the rookery there. They make the oddest noises and are so much fun to watch when they build their nests there every year – and also getting to see the babies when they hatch. It is an awesome experience. Every year we… Read more »

Poor cat! Actually, mockingbirds keep those cats in line by instilling a fear of birds. We mostly keep our cat indoors, so that it doesn’t snag a Carolina Wren … one of my favorite year-round backyard birds. I’d hate to lose a wren, any time of the year.

So very enjoyable! All the sounds are so crisp. (I didn’t even notice any traffic noise.) I could just play this all day. 🙂

Now that I listen to the recording, I agree … the distant traffic is hardly noticeable. I did reduce it somewhat, but made no big effort to eliminate it.

Splendid. Good to know you are taking such efforts…these calls nad chirps are indeed soothing for frayed nerves.

Well, I sure do enjoy listening to the recording. It’s almost as good as being out there!

I would absolutely LOVE to know bird songs as well as you. You are my birdsong idol. And a parabolic mic is on my bucket list.

Click here to find out how.
wpDiscuz
41
0
Would love your thoughts, please comment.x
()
x
| Reply