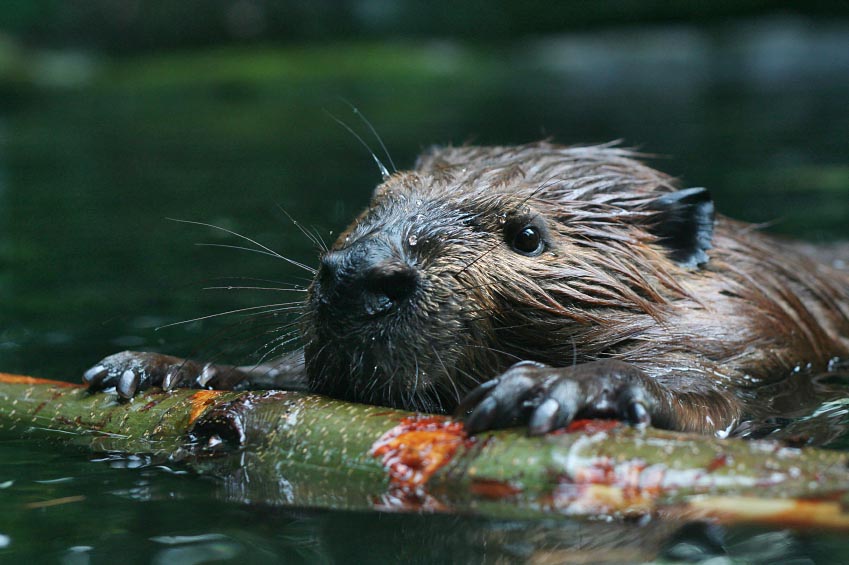 What kind of voice does the beaver have? Would you ever guess that the young (and maybe adults too?) make expressive moans from within the den, especially in the autumn of the year?

I well remember making this recording. I had just discovered a small beaver pond deep in the forest. There was a dam about thirty feet long and the den, a large mound of sticks, was placed right in the middle of the pond. I left for the day but returned around midnight. I set up my tent, and then waded out into into the pond, placing my stereo soundscape microphone directly on top the den. Next I ran the microphone cable back to my tent, using several stakes to keep it above water (so that the beaver would be less likely to discover it and chew through it). Finally, from the comfort of my sleeping bag, I monitored activity through headphones into the wee hours of the morning.

Aside from water trickling over the dam and occasional chewing sounds, things were surprisingly quiet until around 3am, at which time I was treated to quite a display of talkings. First I heard a beaver expel air (sounds like a growl), then some chewing, and then a delightful variety of animated moanings and mumblings … all coming from inside the den. I presume the moans are sounds of youngsters, voicing their contentment as they happily chew the bark off small limbs (it’s possible, though, that the low-pitched moans are from an adult … I’m just not sure).

What a great catch, and still my all-time favorite beaver recording! Listen with an open heart and you will fall totally in love with these little guys (as if you weren’t in love with them already).

thank you for the info

THE SOUND OF BEAVERS - Worth A Dam

I love this. Tonight I heard the soft whimpering noisesfrom a nearby lodgeand wanted to know if it was from adults or babies. Sounded like babies. Thanks for the recording! Good job.

Hi Lang, I absolutely love these recordings and was always hoping to hear them at a den. Recently my husband and I set up a trail camera on a tree a beaver was felling. To our surprise there were two beavers and one was quite talkative and make sounds like yours did. Here is a youtube link (https://www.youtube.com/watch?v=r8SSsG9bl38&feature=youtu.be). I hope you can hear them. Thanks again for your wonderful blog! Laura Hughes Ohio

I can just imagine them saying, “Hmmm,” “Yeah,” and so on to each other, and the babies saying, “Ma.”

This is a good one!

I’ve had the good fortune to put my ear to the vent of several bank dens in the summer and the delightful high whines of the kits are such a joy!

Hi Mary! In your experience, have you heard more whining in the summer than in the autumn? I’ve been assuming this is more of a late summer or autumn thing, but it occurs to me that perhaps I haven’t listened to that many dens while summer still burns strong.

Lang, What unbelievably tender sounds made by the baby beavers. Makes me want to cry. These sweet sounds would resonate with almost any sentient being. You too were quite brave to risk your audio equipment with all those big gnawing teeth around. We once had a rehab beaver named Anastasia. She eventually recovered, we released her and hopefully went on to have sweet cooing cubs(?) of her own.

maby you are not close to a lake

I’ll never see a beaver or a beaver damn again without recalling these sweet tender sounds. While I appreciate beavers visually their sounds pulls at my heart strings awakening a deeper connection. thank you.

Thank you Camille … those moans do indeed pull at the heart strings.

Lovely to have breakfast to! Thanks

I am a volunteer Camera Operator for the Cornell Lab of Ornithology’s Sapsucker Woods Pond Camera. There are several Beaver there on the pond and I always get so excited when I see them. I think they are beautiful creatures. Very family oriented. Your recording just makes me love them that much more. Thank you!

Cheryl: Nice to hear there are beaver at the Sapsucker Woods pond! I know a great place for beaver not far from town and I hope to do a lot of work there (filming beaver) in the months to come.

I wonder if the higher pitched sound is from an un-weaned kit telling mom it’s time to suckle? It sounds very ‘young’, and insistent! Lovely recording of happy home sounds, contentment in their element.

Sharon: Someone else suggested that. I’m guessing they are both youngsters (with one bigger than the other), though I could certainly be wrong, and it’s entirely possible that the lower moans are from an adult. I’m no beaver expert, that’s for sure!

This sounds a lot like my baby granddaughter, your next-door neighbor who was singing with me today for the first time as I walked with her in the front pack. But no submerging splashing sounds!

I just had a moment of panic when I was closing extra tabs in my browser and the beginning of this recording started emanating quietly from my computer–I thought that scraping sound was my hard drive at first!

I posted this recording just to fool you, Charley!

Very glad you took the time (all night?) to record this. Would never have imagined.
Fun to hear.

This is absolutely delightful!

I love this, Lang. What a great and atmospheric story about your recording it! Those special moments recording are the best days, the sweetest memories.

I could listen to these darling murmurings all day!

Thank you Gina. For anyone reading, check out Gina’s amazing work with nature sounds here:

Gosh, thank you, Lang. You know I couldn’t have done it without you in those early days. You are a treasure! xox

Fascinating. Inspires me to relay a great beaver encounter I had a few years ago in the Adirondacks. I witnessed a beaver fart! I was sitting on the edge of a beaver pond near Long Lake, watching, with binoculars, a beaver slowly swim about. I didn’t move, and after about a few minutes it came so close to me that I could hear it breathing. It was looking right at me, about 20 feet away, when bubbles rose to the surface right at its tail. Surely that was a flatulent beaver!

Phil: I have a similar story. Many years ago, I was in the Rainbow Lake area of the northern Adirondacks, talking with several friends in a driveway. And here comes a Canada Goose, flying directly overhead. My friends ignored it, but I cupped my ears to enjoy the whooshing sound of the wings. And that’s when I heard it, clear as day, a goose fart of the likes that you might only dream of! I thew my arms up and and shouted to my friends “I just heard a goose fart.” They looked at me, blank-faced, unbelieving. And then there… Read more »

Hi Phil, Hi Lang, Hi Everyone: A friend of mine was serving as superintendent of a national park in Florida. A manatee expert came to census the manatee population. My friend asked how the scientist intended to find them. Turns out manatees, which have intestines well over 100 feet long, bubble up a lot of intestinal gas. Someone with a trained nose and ears can detect them from a considerable distance. Debbie and I once swam spent an hour swimming close to a dugong in the Indian Ocean off Western Australia. As far as we could tell, this cousin of… Read more »

Thanks for chiming-in Ed. I know that you are an expert at such things!

What a great conversation! Kids say the darnedest things

That they do Martha! And I like your new avatar!

I guess beaver Moms and Dads don’t teach the kids not to “talk” while they chew.
Love this one!

So lousy parenting has its upside: I get a nice recording of unruly children!

Amazing! My cat is fascinated by the sounds too!

Cats are the ultimate test of acceptability.

Totally cute! Do you think the higher pitched sounds are from a young beaver and the lower pitched from an adult? If so, it sounds like there might be two youngsters there.
Amazing recording!

Diane: Good observation. I’m not sure if the lower is an adult and the higher is a youngster. Or if the lower is just a bigger youngster? I’m just guessing these are young, but maybe some beaver expert will tell me otherwise. Could be that these are actually two very old guys telling dirty jokes!

Wow, how sweet…”youngsters, voicing their contentment”. Thanks for this and all the beautiful work you share. I so look forward to your posts.

Click here to find out how.
wpDiscuz
51
0
Would love your thoughts, please comment.x
()
x
| Reply