Wintering in the southern states, the American Woodcock (which I affectionately refer to as the PeentMeister) has begun its trek northward, arriving here in upstate New York in mid to late March. I am told that woodcock are now passing through Virginia, so it won’t be long before I will once again witness their spectacular courtship display (described in detail below).

The Woodcock is one silly-looking bird. Plump and roundish, it has a long fleshy beak (for feeding on earthworms), big round eyes (for excellent night vision), mottled leaf-like coloration (for protection from predators), and it bobs up and down when it walks (to the delight of all who watch). 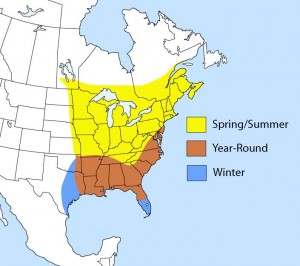 Ranging over most of the East, woodcocks are members of the shorebird family. But unlike their more aquatic brethren who prefer beaches and shorelines, they inhabit forested areas with clearings and feed in moist, swampy spots, inserting their long beaks into the mud to locate and extract earthworms (the tip of the beak is actually flexible).

Among nature lovers, the woodcock is best known for the springtime courtship display of the male, given both on territory and during migration. At dusk, and then again at dawn, males fly to old fields where the ground cover has been battered down by the winter snow, rain, and wind. There, each male takes possession of a “display territory,” which he defends from other males.

Strutting about on the ground in the darkness, the resident male gives loud, nasal peent calls that are preceded by soft, throaty gargled notes. Every few peents, he wheels around and then calls from a new direction. Periodically, the male launches into flight, rising into the air with a liquid, musical twittering made with his wings (twittering is produced by the vibrations of three narrow outer primaries).

The male spirals upward a hundred feet or more, ascending in large circles until he reaches the apex of his flight, at which time he drops from the sky with erratic movements, all the while making melodious whimpering chirps as he descends. Just before reaching the ground, he levels off, skims along the surface, and then sets down, almost in the exact spot from which he took flight. There, he peents and struts as he did before, and then, after a minute or two, repeats his extraordinary flight performance. 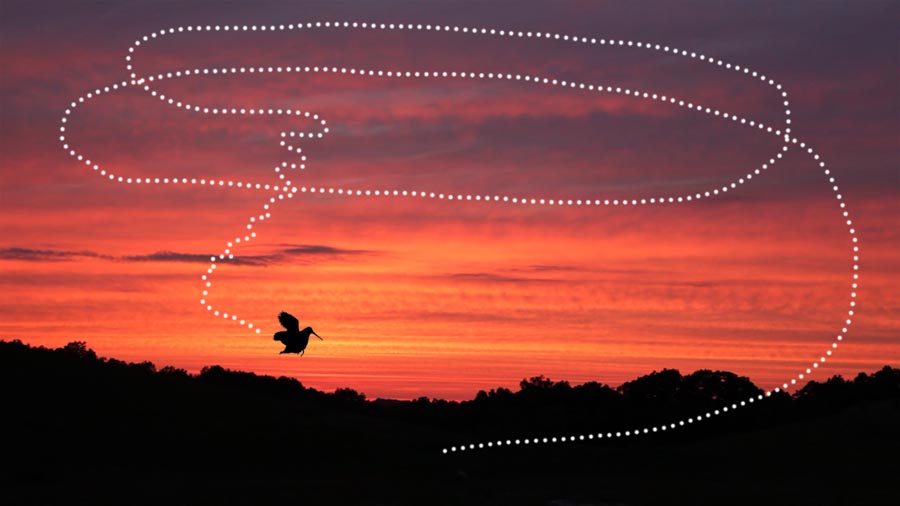 Stereo recording of male’s breeding display, featuring gargles and peents given on the ground, flight with constant wing twitter, whimpering whistles on descent, wing flutter while landing, and then more gargles and peents. Spring peepers call prominently in the background:

If a female approaches a calling male on the ground, he will move toward her with his wings stretched upward, and will copulate if she allows it. There is no pair bond. The mating system is of the “promiscuous” variety; males will mate with any female that approaches and females may visit nearby fields and mate with other males.

The female lays her eggs in a small depression on the ground. Young are precocial and will run after their mother shortly after hatching. It is not unusual to observe a family crossing a highway, all bobbing up-and-down, but not at all in synchrony … quite a laughable performance!

Given its odd appearance and unusual habits, it is not surprising that the woodcock has been given a number of interesting common names. My favorite is Timberdoodle, but they are also referred to as Bog Suckers and Night Partridges. I’ve even coined my own name, PeentMeister, in celebration of the male woodcock’s nasal call.

All hail the PeentMeister, shorebird extraordinaire!

Knowing the place and the hour, you seat yourself under a bush to the east of the dance floor and wait, watching against the sunset for the woodcock’s arrival. He flies in low from some neighboring thicket, alights on the bare moss, and at once begins the overture: a series of queer throaty peents spaced about two seconds apart, and sounding much like the summer call of the nighthawk.

Suddenly the peenting ceases and the bird flutters skyward in a series of wide spirals, emitting a musical twitter. Up and up he goes, the spirals steeper and smaller, the twittering louder and louder, until the performer is only a speck in the sky. Then, without warning, he tumbles like a crippled plane, giving voice in a soft liquid warble that a March bluebird might envy. At a few feet from the ground he levels off and returns to his peenting ground, usually to the exact spot where the performance began, and there resumes his peenting.

It is soon too dark to see the bird on the ground, but you can see his flights against the sky for an hour, which is the usual duration of the show. On moonlight nights, however, it may continue, at intervals, as long as the moon continues to shine …

Reproduced with permission of Wisconsin Agriculturist, where the essay first appeared.

2. Flight display of male – closeup recording of wing twitter followed by whimpering chirps given during descent:

3. Aggressive cackles of male, given during encounters with other males:

NOTE: The above species account was first published as part of the Miracle of Nature effort.

Thanks Scott… it was not an easy project! Woodcock are back and displaying here in upstate New York. I may try to get some footage of one in flight at dusk, though I’m not sure if that’s very doable, given my current equipment.

I heard the peent, heard the liquid descent notes and saw one come down suddenly and slantwise twice tonight but somehow missed the ascent. It was windy and sort of raw – I wonder if the weather affects their display.

I’m not sure about the effects of weather, but I do believe that they’ll display all night long during the full moon.

I am hearing woodcocks at dusk around me in Lebanon, CT. We first noted them on Mar 3. Spring is here!

Although I haven’t heard them yet, many are reporting Woodcock here in the Ithaca area of upstate New York.

Spring peepers and timberdoodles, what could better herald spring? So looking forward to it!

Amazing courtship dance info. I truly enjoy your blog Lang, your videos, soundtrack poems and information you include about birds. Awesome work you do.

Outstanding video as always. Looking forward to the return of the timber doodles!

I’ve always loved looking at photos of this bird but I had no idea how amazing it really was until reading your blog! It would be really fun to see this display in person.

well, then let’s do a woodcock expedition, once they are back.

This is my first view of the Woodcock…and the wings are so pretty! They remind me of Mother-of-pearl with that lovely sheen.
Have you ever thought that? Thank you for sharing such a beautiful video.

The wings do indeed have a lovely sheen. Though strange-looking, the Woodcock is definitely a work to behold!

My cat was fascinated by the video and kept trying to find the bird behind the screen while I played the sound recordings! Wonderful video and recordings. Thank you for the preview of spring!!

Fabulous info and recordings.We call them Timberdoodles. It’s always a thrill to see one. Thanks always Lang! Lynn F

Yep … I like “Timberdoodles”. I wonder, though, about the origin of that common name. What does “doodle” have to do with it? Woodcock don’t scribble absentmindedly, or do they?

I was born and raised in NYC and camped upstate and eventually moved upstate.
I enjoy getting your emails daily with these wonderful videos of wildlife.
Now I know who I am hearing during the seasons.
I hope you are healed and healthy so you can keep up the wonderful work you do!