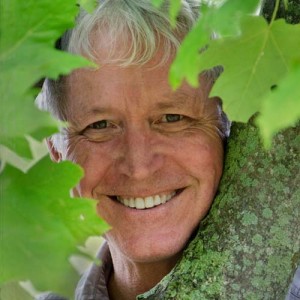 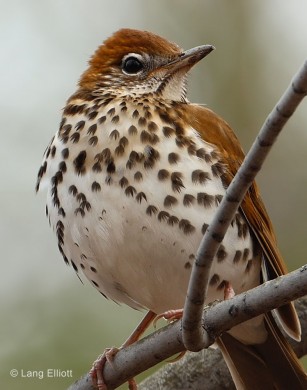 Lee-o-lay-o-lee, will you come live with me, away high in a tree? … that’s how I describe the Wood Thrush’s singularly beautiful song. Starting with soft grunts (heard only at close range), the flutey song usually rambles upward and then terminates with a variable trill. Each male has about a dozen different song patterns, some sounding very similar to one another (he actually has many more, if one includes subtle variations in portions of each song).

Inhabiting hardwood forests throughout most of eastern and central North America, the Wood Thrush is a fairly common species, though suffering in recent decades from significant population declines. The song of the Wood Thrush is undeniably one of the most beautiful of all forest melodies … it will surely be a sad day if woodies no longer grace our forests with their uplifting songs!

As with all our native thrushes, the magical quality of the song is best appreciated when heard at a distance, where the song is more reverberant and has merged with the total soundscape and environment. I gathered the following ambient recording in a deep ravine in the Smoky Mountains in late April. Two distant thrushes can be heard, along with a trickling brook and other bird songs:

Arthur A. Allen, one of the founders of the Cornell Laboratory of Ornithology, was a master at describing bird songs, and I have always been fascinated by the sensitivity of his prose. Consider, for example, his opening paragraphs in an essay entitled “Wood Thrush,” featured in a Cornell Rural School Leaflet published in 1909. Note how he brilliantly sets the scene and then gradually wanders toward the full impact of the thrush’s song:

Who has sat on the bank of a shaded glen or at the edge of a cool wood just as the shadows begin to lengthen and the bright light of day begins to take on the mellow tone of a May twilight? The little brook gurgles just out of sight, and water dripping from the rocks strikes the surface of a pool with a music that cannot be described. The silence seems broken only by these sounds and the murmur of the wind among the new born leaves.

Suddenly you become aware that other music is filling the woods. It has come to you so gradually, has been so much a part of the murmuring stream and dripping water that you have not noticed its beginning. All at once it forces itself upon your consciousness and you realize that you have been hearing it all the while. Now that you have noticed it, everything else sinks into insignificance and the top of the tall maple seems to resound with pure, rich, flute-like tones.

“Come—to—me” say the first few notes in the sweetest cadence, so deliberate, so majestic, so fully toned for the music of a bird, that we may truly call the author of it the king of songsters. This song we shall remember though we forget all others. It is that of the Wood Thrush.

Neighboring males often sing back-and-forth, with minimal overlap of their songs. From a distance, this might sound like one male singing rapidly, but careful listening reveals that there are two males involved.

Like most of our native thrushes, the Wood Thrush often sings at dusk. At that time, one may sense a profound spiritual quality in the songs, as if they were solemn yet beautiful offerings, portals into the magic of the night.

A Personal Sidenote from Lang:

For a number of years, I had trouble getting good video footage of a singing Wood Thrush. The usual problem is that singing males are timid and almost always are perched behind leaves, high in the canopy. On a recent outing, however, I got lucky and discovered a newly-arrived male who didn’t seem to mind me standing around in his woodland territory, sometimes only thirty feet away. On one day in particular, he put on quite a show and that’s when I got all the footage featured in the video portrait above. At long last … Wood Thrush success!