This disc has been specially produced for distribution to participants of the 2020 Festival of the Birds at Presque Isle in Erie, Pennsylvania. Ten spacious and immersive tracks have been drawn from Pure Nature 3D Soundscapes, a free application for Apple mobile devices. Learn more about Lang’s app here. 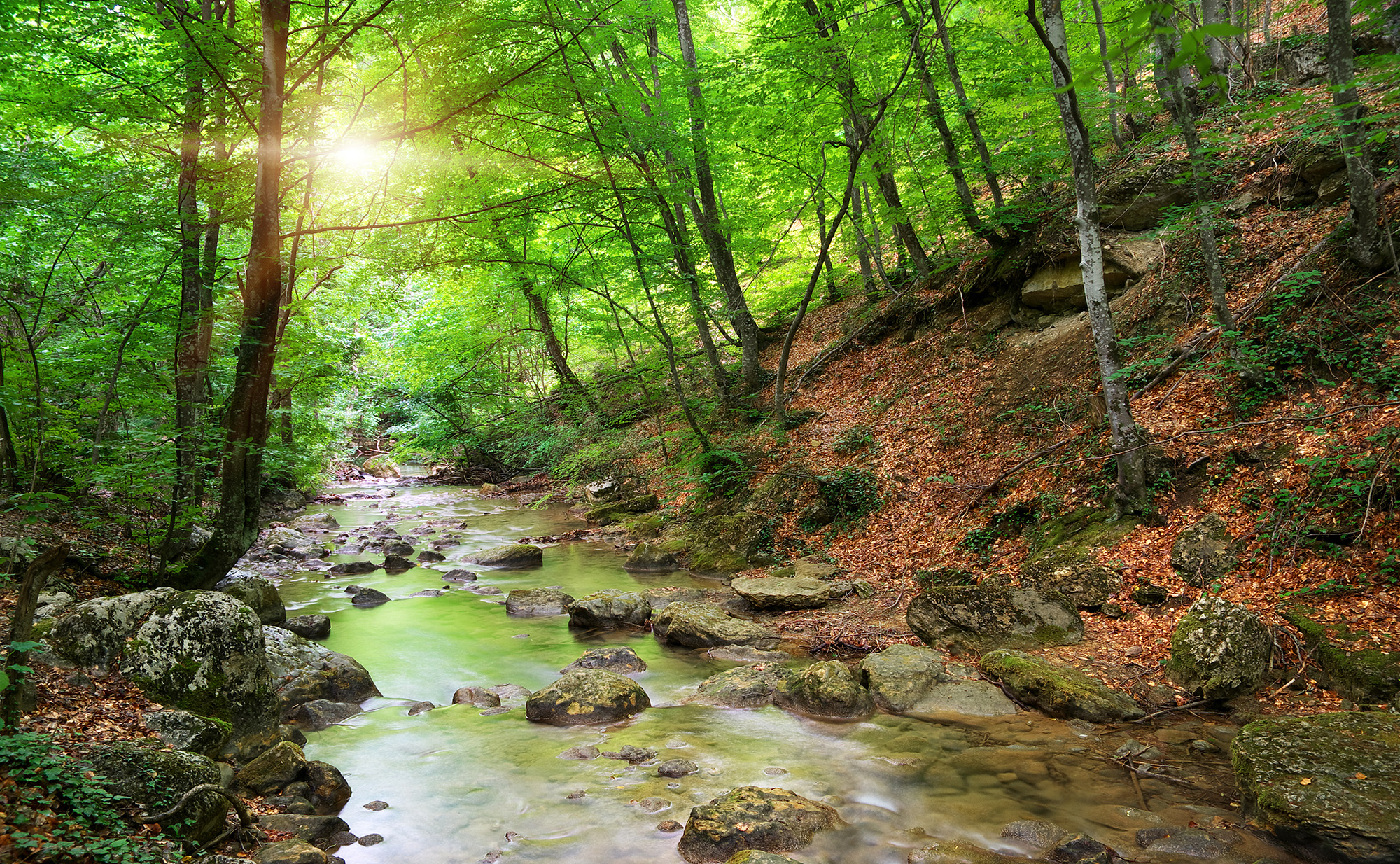 Note: The recordings featured in this album are “3D binaural soundscapes”. Please wear headphones for a profound listening experience that will make you think you’re actually out there, immersed in the natural world!

In the Ozark region of northern Arkansas flows the spring-fed Buffalo River. Meandering through the mountains, the river passes by countless limestone bluffs and round-stone beaches.The water is pure and clear.

In early May, we camp where a tributary flows into the main river. At dawn, we rise to the songs of birds … tufted titmouse, Kentucky warbler, black-and-white warbler, blue-gray gnatcatcher. We are soothed by the chorus and the scenery. Such extraordinary beauty surrounds us!

May 5, 2011 at 6:30am. Leatherwood Wilderness Area, near Mountain View, Arkansas. Recorded by Lang Elliott.

Late one August we explore the Lake Ontario shoreline shortly after dusk. The lake usually has lots of wave action, but on this occasion, the sea is calm. At first there is no wind, but periodically we feel a light breeze on our faces and hear the gentle rustle of tree leaves overhead.

Small waves wash-in more or less randomly, splashing and bubbling as they flow over rounded stones. Snowy tree crickets give pulsating chirps from nearby shrubs, while other crickets trill and chirp at higher pitches.

The soundscape is eminently soothing, a laid-back, rather low-key expression of the changeful voice of the lake.

While exploring Erie National Wildlife Refuge in northwest Pennsylvania, we take a late afternoon hike down a mile-long boardwalk that passes through swamplands and then terminates at a meandering creek in deep forest.

As we arrive at the end of the trail, we hear distant thunder and soon it begins to rain. A wood thrush flutes from a tall tree along the creek and we hear the burry notes of a scarlet tanager in the background. The birds, protected by the dense foliage, keep right on singing in spite of the storm.

We stand below a huge hemlock tree and enjoy the mix … the rain coming and going and birds singing throughout.

During an excursion into British Columbia, we spend several days in the beautiful Okanagon Valley, known for its wineries and fruit orchards. But instead of spending our time tasting fruits and wines, we head into the nearby mountains in search of interesting natural soundscapes.

While exploring the area around Baldy Mountain, we hike down an old logging road that runs parallel to a mountain brook in a deep ravine. We are struck by the number of swainson’s thrushes that we are hearing … their songs dominating the forest at every turn.

When we come to a small freshet tumbling off the hillside into the ravine, we stop for several minutes to enjoy the music of the thrushes, so nicely intertwined with the atmospheric gurgling of water all around. Truly a paradise on earth, here on the steep mountain slopes that overlook the valley below.

During a trip to south Texas, we spend the night in dry brush country dominated by grasslands, mesquite thickets and prickly pear cactus. The dawn chorus is a magnificent ensemble of sound, very different from what we’re used to back home.

At the bottom end of the sound spectrum, common ground doves and greater roadrunners coo, the latter giving downward series’ of whining notes. Higher up, many other birds sound off, including cactus wrens, olive sparrows, northern bobwhite, and yellow-breasted chats. We are delighted to hear the sudden outburst of a yellow-billed cuckoo. So many sounds … what species have we missed?

Such an engaging chorus, so rich in sound from low to high!

May 20, 2005 at 5am. Chaparral Wildlife Management Area, near Artesia Wells, Texas. Recorded by Lang Elliott.

It is dawn in late May in a shrubby meadow in the rolling hills of upstate New York. A violent storm passed through in the night and now light rain falls. Numerous gurgling rivulets course through the meadow, draining excess water from the downpour.

As dark clouds recede and blue sky appears, male songbirds of many species burst into song, excitedly proclaiming their territories and filling the meadow and surrounding forest with their music. A ruffed grouse also sounds off, it’s thumping drums periodically erupting from the meadow’s edge. We slowly breathe in the sonic landscape … one of nature’s finest symphonies, pouring forth in this wet meadow at dawn!

May 26, 2014 at 6am. Overgrown meadow near Caroline, New York. Recorded by Lang Elliott.

In mid-May, we spend the night camping near Clingmans Dome (6643 feet), the highest mountain in Great Smoky Mountains National Park. At dawn, strong winds blows over the mountaintop. We saunter along a trail through dense spruce forest, listening for birds.

In a small clearing where trees have blown down, we encounter a winter wren, singing its excited silvery song from a perch on a dead limb. As the wind settles, a junco trills and we hear the sweet whistles of a black-capped chickadee. Several crows soon show up, calling loudly, and we hear scratching sounds made by a red squirrel, pawing at a tree trunk. Next, a catbird joins the orchestra. The wind picks up again and minutes later a black-throated blue warbler lands nearby, his rising, buzzy zhree-zhree-zhree thrilling our ears.

Such an interesting and informative soundscape, featuring a well-rounded mix of birds found at high altitudes in the southern Appalachians. Being avid birders, we are grateful to behold this mountain-top symphony of sound.

May 18, 2000 at 7am. Spruce Trail near Clingmans Dome, Great Smoky Mountains National Park, near Gatlinburg, Tennessee. Recorded by Lang Elliott.

During our first trip to the prairie states, we discover the Missouri Couteau region of North Dakota. Dotted with thousands of pothole lakes and ponds, it is a virtual wonderland for wetland birds.

At dawn we hide among reeds along the shore of a large lake. Marsh wrens chatter loudly from the cattails and an american bittern gives resonant pumping calls: pumplunk, pumplunk, pumplunk. A duck breaks from the water, quacking as it flies away. Suddenly there’s an outburst of whimpering whinnies from several sora rails. And there … the sharp bek! of a gadwall and the chux of a shoveler. And isn’t that a willet, calling repeatedly as it flies overhead?

The marsh is so incredibly alive with sound. Oh my … a duck flies right in front of us, and then lands. There’s just no end to the action in this super-charged primordial soup, so utterly and completely full of life.

May 17, 1993 at 6am. Chase Lake area near Pettibone, North Dakota. Recorded by Lang Elliott.

In early May, we visit to the San Pedro River Reserve in southeastern Arizona, a refuge managed by the Arizona Nature Conservancy. In the middle of the night, we hike down the river, which is mostly dry except for shallow pools of water scattered here and there.

The soundscape is remarkable. Numerous species of crickets trill and chirp. Woodhouse’s toads give harsh, gagging calls. Great horned owls hoot. We hear the snapping sounds and wing flutters of bats flying overhead. Yellow-breasted chats sound off throughout. And a lesser nighthawk trills continuously, so softly that we do not notice it at first. Oh my … were those the distant coos of a white-winged dove? And who is scratching around in the leaves?

Such an extraordinary mixture of bird, mammal, frog and insect sounds! We are impressed by the sheer diversity, and how the sounds combine so beautifully to produce a magical and captivating listening experience.

We spend the night at Land Between the Lakes, Kentucky. In complete darkness, we stand next to a clear spring that trickles from the base of a ledge and flows into a swamp. A storm is approaching. American toads trill continuously while spring peepers sound off in the background.

The soundscape is magical and soothing … the dreamlike trills of the toads and shimmering peeps of the frogs mixing and blending with thunder, wind and rain to create a splendorous symphony of natural sounds.

Would that we could be a frog or toad, at least for a moment, so that we could feel this watery world as they do, drenched and invigorated in the darkness of the stormy night.

April 9, 2000 at 8pm. Land Between the Lakes, near Golden Pond, Kentucky. Recorded by Lang Elliott.