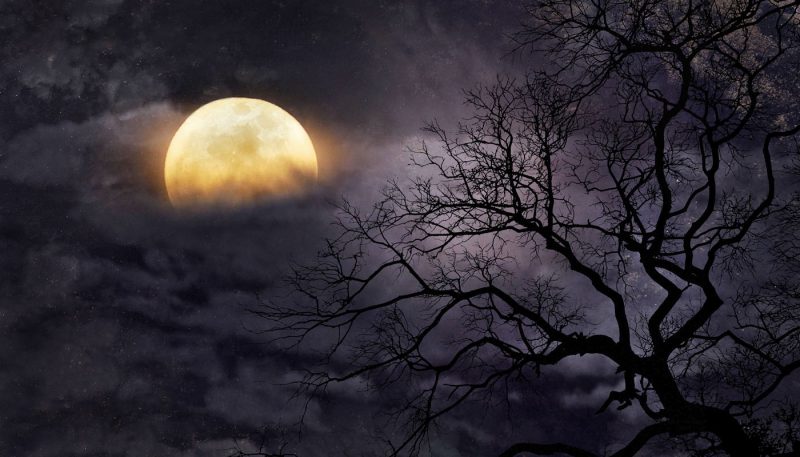 The mysterious voices of the night … hoots, croaks, peeps and snorts … have long fascinated and sometimes frightened humankind. Without doubt, there is something quite unsettling (yet also fascinating) about hearing strange and haunting utterances in the dead of night, and not being to see the creatures that are making them.

Join us now as we embark on an amazing journey into the night! 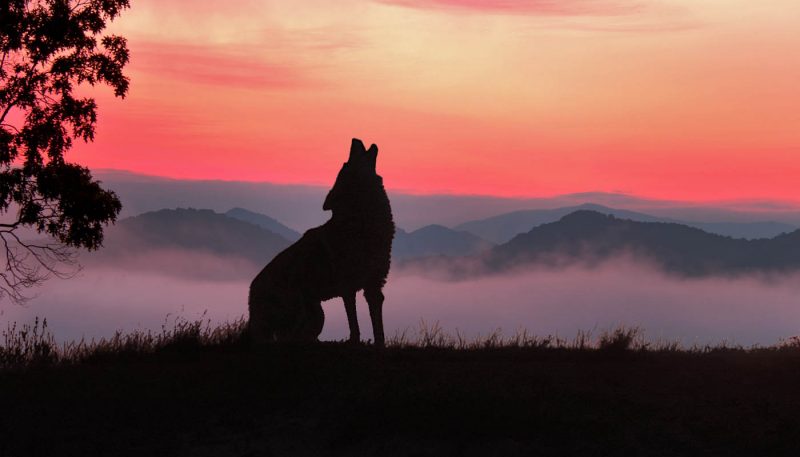 While visiting Cade’s Cove in the Great Smoky Mountains National Park, we spend the night walking the loop road. Shortly before first light, we rest next to a babbling brook. A whip-poor-will sounds off in the distance.

Then something unexpected … we are surprised by the howls of a pack of coyotes, their performance being the most musical we have ever heard. Such a primal night song, emotionally charged and moving. We are spellbound.

The coyote serenade fades, the whip-poor-will resumes singing, and then the coyotes begin howling again, from far in the distance. We are entranced by the mountain soundscape, by these magical voices of the night. 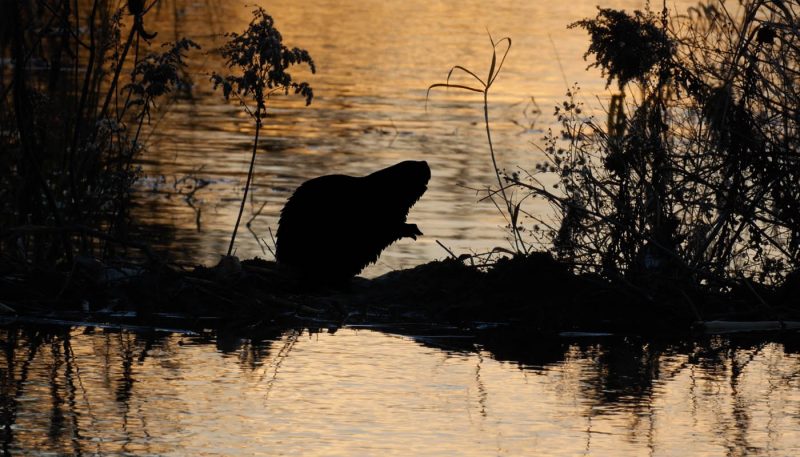 In early autumn, we camp next to a small beaver pond in a wildlife management area not far from where we live. We position our tent on high ground quite close to a large den of sticks and mud. Our plan is to spend the night listening for beaver sounds.

For hours, all we hear is the sound of water gurgling over the long beaver dam that encircles most of the pond. But shortly after midnight, the action picks up. First we hear a hissing growl, which we presume to be made by an adult, followed by chewing sounds. Then, to our absolute delight, the young of the year join in the action, giving animated nasal moans and chewing excitedly for minutes on end.

So this is what beaver-talk sounds like … we never would have guessed! And they sound so cheerful, like they’re having a very good time! 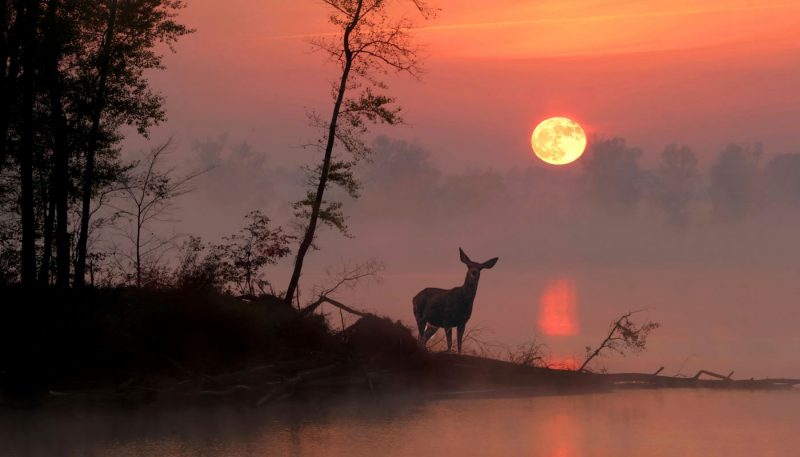 Land Between the Lakes is one of our favorite locations for enjoying the sounds of nature. One year, we visit in mid-April and arrive after dark. Making our way to a swampy area next to woods, we are shocked by the number of whip-poor-wills in the area, their repeated songs mixing with the bright notes of spring peepers and the chirps of field crickets.

Great blue herons croak excitedly from the far side of the swamp, their raspy talkings lasting for quite a long time. We also hear the tail slaps of a beaver, chewing sounds, and the chuckling of distant leopard frogs. And that’s not all … a white-tailed deer suddenly snorts and pounds its hooves against the ground, eventually bounding away. Minutes later, another does the same.

What an amazing night chorus … so alive and full of sounds. We pray that generations to come will also behold such splendor, nature speaking in countless tongues!

April 15, 1995 at 11pm. Land Between the Lakes, near Golden Pond, Kentucky. Recorded by Lang Elliott. 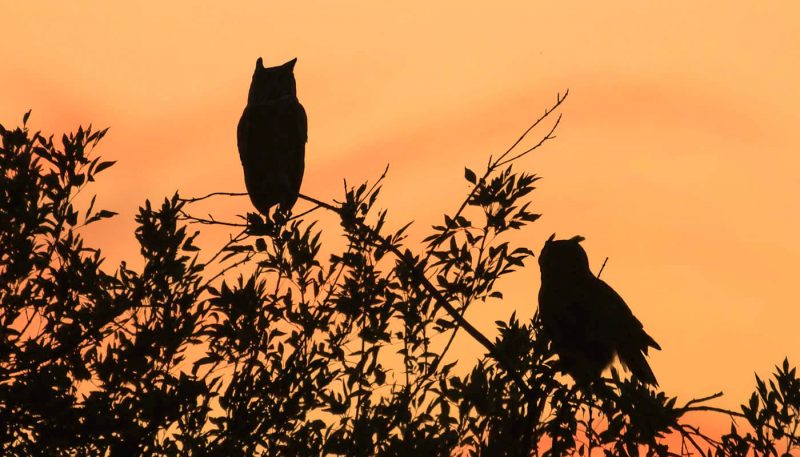 In early May, we visit to the San Pedro River Reserve in southeastern Arizona, a refuge managed by the Arizona Nature Conservancy. In the middle of the night, we hike down the river, which is mostly dry except for shallow pools of water scattered here and there.

The soundscape is remarkable. Numerous species of crickets trill and chirp. Woodhouse’s toads give harsh, gagging calls. Great horned owls hoot. We hear the snapping sounds and wing flutters of bats flying overhead. Yellow-breasted chats sound off throughout. And a lesser nighthawk trills continuously, so softly that we do not notice it at first. Oh my … were those the distant coos of a white-winged dove? And who is scratching around in the leaves?

Such an extraordinary mixture of bird, mammal, frog and insect sounds! We are impressed by the sheer diversity, and how the sounds combine so beautifully to produce a magical and captivating listening experience. 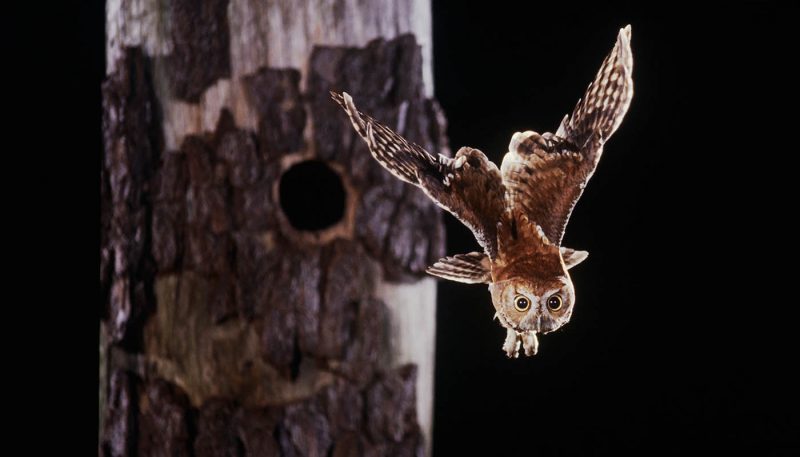 In late August, we spend the night camped near the bottom of a steep slope, in mature hardwood forest. As darkness falls, true katydids begin chorusing, their raucous notes set against the constant trill of tree and ground crickets. Audible at times are the high-pitched rattles of round-winged katydids. We fall asleep to the chorus, which becomes more lazy as the night progresses.

In the wee hours of the morning, we are awakened by the eerie-sounding whinnies of an eastern screech-owl, calling from nearby. Soon the owl flies even closer and treats us to an endearing series of calls that end with soft nasal squeals. The owl finally grows quiet, but we hear others calling softly in the distance.

How nice be charmed by such lovely night-songs. We sleep soundly until dawn, the mournful notes of the screech owls still resonating within our minds. 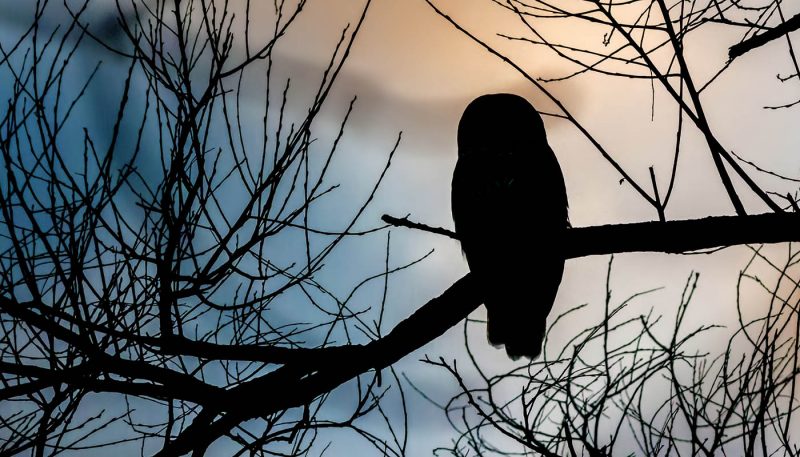 As autumn unfolds, insect choruses begin to mellow and become more pleasing to the ear. With this in mind, we visit the Adirondack Mountain region in upper New York State and camp at the edge of the forest, next to a grassy meadow with scattered shrubs.

Snowy tree crickets give pulsating chirps and seem to synchronize their calls. A little higher in pitch, other tree crickets trill continuously. At the very top of the frequency spectrum, cone-headed katydids give raspy notes.

What captivates us most, however, are the hoots of a distant barred owl, which eventually lands nearby and is joined by another. We are entranced by the echos of their hoots, which gradually fade into the background as the insects continue singing unabated. 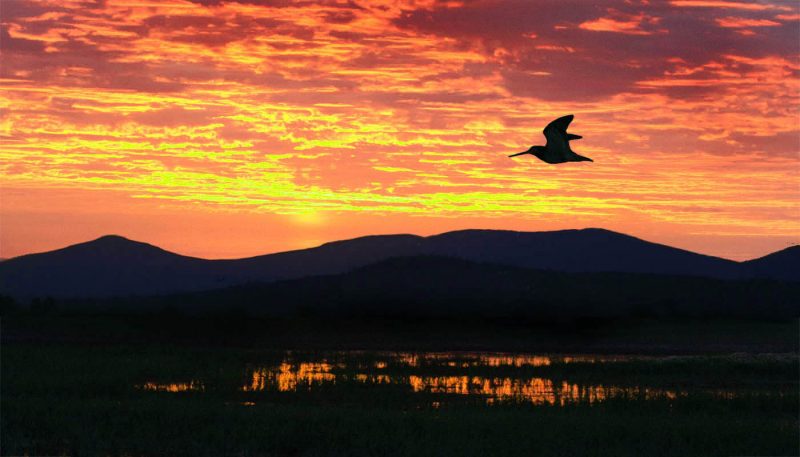 In Oregon, we come across one of the most amazing soundscapes we’ve ever heard. While visiting Klamath Marsh National Wildlife Refuge (not far from Crater Lake), we stop along an access road in the hour before dawn. It’s as if we’ve stepped into another world.

Common snipe are in the air all around us, performing aerial flight displays. We spot one, silhouetted against the eastern sky, swooping down and then upward again. Their strange winnowing sounds, made by air rushing through their spread tail feathers, are unlike any other bird sounds on earth. We’ve never heard so many displaying together at one location.

Hear the sharp tapping clicks? Those are the calls of the secretive yellow rail, a chicken-like marsh bird that is rarely-seen. One is nearby, hidden somewhere in the sedges. Another calls from farther away.

The marsh is saturated with sound. The distant pumping calls of American bittern bring up the bottom end. Sora rails occasionally give whinny-like outbursts. Tree swallows give dawn songs and we notice the telltale witchety-witchety of common yellowthroats. And there … did we just hear the grunting outburst of a Virginia rail?

We’ve never heard anything quite like this! The soundscape literally takes our breath away.

May 17, 2017 at 5:30am. Klamath Marsh National Wildlife Refuge, near Kirk, Oregon. Recorded by Lang Elliott. 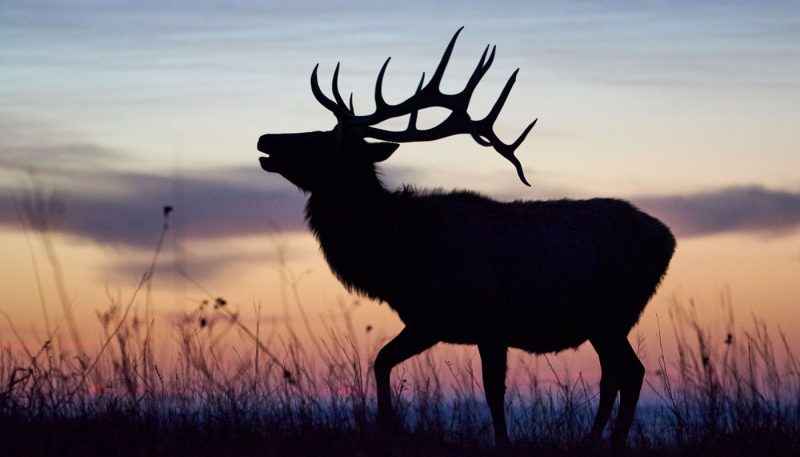 In mid-October, we travel to an elk refuge in Pennsylvania, and camp in a basin surrounded by grassy hills. Shortly before dawn, we are awakened by the bugles of elk in the distance. We rise and head toward the sounds, quickly homing-in on a small herd, feeding in the darkness near the top of a steep hill.

The night is cool. Crickets trill lazily from the grass and shrubs. In the high register, we hear the rapid calls of cone-headed katydids. Then a bull elk bugles from close by, his bellowing whistles echoing across the landscape. Such an incredible mating call, not what we’d expect from such a large mammal.

A female elk soon joins in with nasal barks. We also notice the soft rush of a stream to one side, coupled with the subtle sounds of elk moving and chewing. We are awestruck by the bugles of the male, his piercing whistles an ancient and primal expression that stirs our souls. 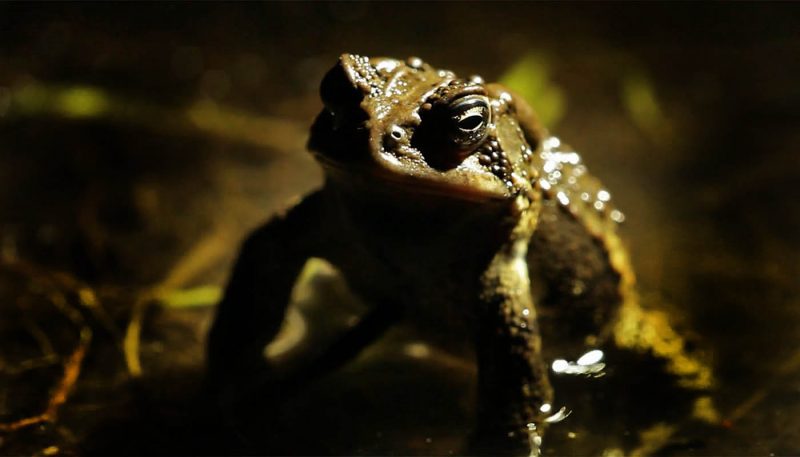 The musical trill of the American Toad is one of the prettiest vocalizations of all the frog and toad tribe. Impressed by the hypnotic quality of a chorus distant toads, Henry David Thoreau referred to the vocalization as the “dream of the toad.” We resonate with Thoreau’s description and are always trying to home-in on choruses that we think capture the essence of the toad’s “dream”.

In early May, at the height of the toad breeding season, we head out at dusk in search of a nice-sounding chorus. We are not disappointed. In Shindagin Hollow, where beaver have created a large pond, we discover toads trilling along with a jingling chorus of spring peepers.

We search for a good listening spot, and eventually find ourselves sitting on a log near the top of a steep hill that overlooks the swamp. The soundscape appeals to our senses. The toad trills are dreamy and the peepers do not overwhelm. We are happy we made the effort to find this charming mix.